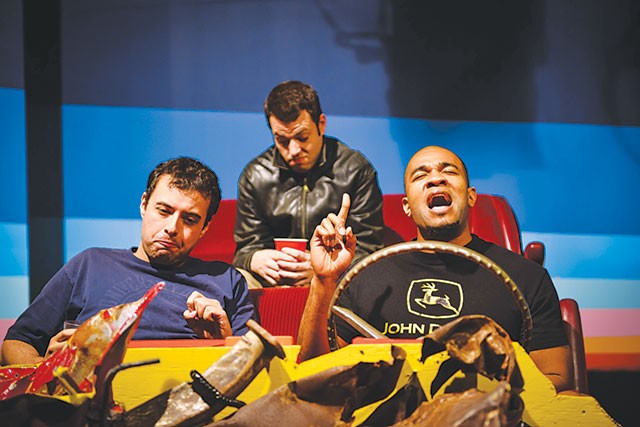 Like proctologists, taxicab drivers observe the human species from a unique angle. A Google search of “taxi stories” yields more than 17,000 entries, including accounts by cabbies in Memphis, Minneapolis, Sydney, Cairo, and Prague. Cabs are a bountiful source of inspiration, though not all its writers remain hacks.

Hellcab consists of almost two dozen vignettes that playwright Will Kern patched together out of his memories of driving a taxi in Chicago. The piece begins at 6:30 on a Thursday morning so frigid that the cabbie has to hold his key over a flame to make it fit his taxi’s lock. It concludes with the same driver’s final fare of the day.

Though it contains poignant moments, the piece lacks a dramatic arc. It is episodic; one passenger after another comes along for the ride, creating the effect of a series of mostly comic TV sketches. Exceptions are Taylor Mobley’s woman in labor, filled with pain, anger, and tenderness as the taxi rushes her to a hospital, Gloria Sanchez-Molina as a traumatized stranger who confides that she has just been raped, and Elizabeth Anne Cave as a receptionist who begins to realize that she is nothing but a sex toy to a wealthy philandering cad.

At the center of AtticRep’s production of Hellcab is an inventive prop, an open four-seater with elaborately gnarled chrome in place of a hood. For director Stacey Connelly, blocking is a matter of getting passengers into and out of the back of the contraption devised by production designer Andréa Caillouet. Occupants are drunkards, junkies, tourists, lovers, lawyers, lunatics, straight, gay, rich, poor, black, and white. Though no character lingers long enough to become more than a caricature, what is most impressive about the production is the versatility of six actors (Keith Berry, Nico Bonacci, Cave, Kareem Dahab, Mobley, and Sanchez-Molina) who change costumes and personalities in less time than it takes to go from the Water Tower to the South Side.

Most intriguing is EJ Roberts’ Cabbie, a man who occupies the driver’s seat but lacks control. A native of Rockford who came to Chicago in quest of fulfilling work, he calls the job he landed “hell.” Treated as confessor, buddy, lover, and servant by fellow travelers, Cabbie is frustrated over having only words to offer those in need of help. Yet he is also a lonely figure who misses his mother and amuses himself between passengers by playing air guitar.

It pays to be wary when your work is to transport strangers and accept their cash. But, set just before Christmas, Hellcab concludes with a sentimental dose of Yuletide cheer that softens its vision of taxis as bedlam on wheels.