Here are the Victims of the Sutherland Springs Shooting 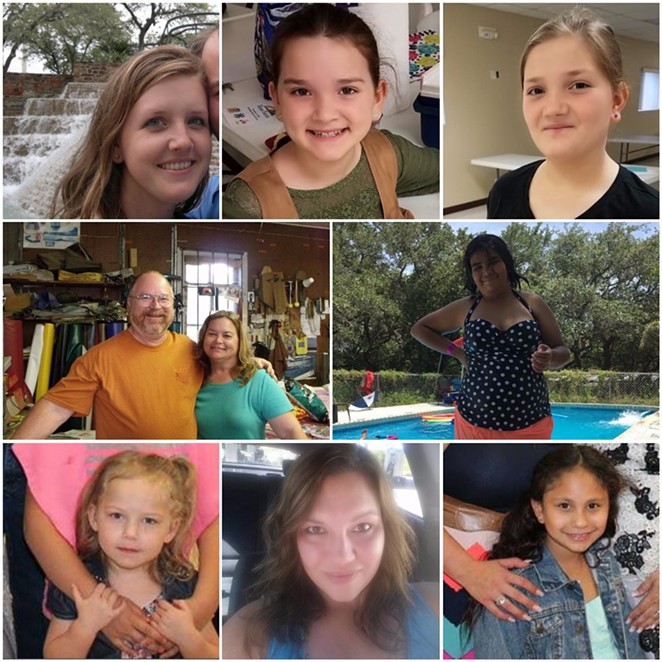 Twenty-six people are dead and at least 20 more are injured after a shooter opened fire on parishioners at First Baptist Church in Sutherland Springs, Texas during the 11 a.m. Sunday service.

The shooter has been identified as Devin Patrick Kelley, who died from a self-inflicted gunshot wound after being chased down and shot at by two local residents. At least 12 of the victims were children, according to Wilson County Sheriff Joe Tackitt.

Here is what we know about the victims of the deadliest mass shooting in Texas history so far:

Annabelle Renee Pomeroy, 14
The 14-year-old daughter of First Baptist Church Pastor Frank Pomeroy was the first confirmed victim of the shooting. Annabelle Renee Pomeroy was the youngest daughter of the pastor and his wife, Sherri Pomeroy. Her father told ABC News she was “one very beautiful, special child.” He and his wife were in Oklahoma at the time of the shooting, and were headed back to Sutherland Springs when they received the news.

Bryan Holcombe, 60
Bryan was an associate pastor at First Baptist, and was walking up to the pulpit to preach when he was shot, his father told the Washington Post. He is one of eight members of his family who died in the shooting. “This is unimaginable,” Bryan’s son, Scott Holcombe, told the New York Times. “My father was a good man, and he loved to preach. He had a good heart.”

Karla Holcombe, 58
Karla, who was married to Bryan for over 25 years, taught Sunday school classes and volunteered at a prison, her friend Jenna Brown told the Daily Beast. She and Bryan owned a canvas repair shop in Floresville, Texas before retiring. “They were about as close to a true life of Christ as you could get,” Brown said.

Crystal Holcombe, 36
Bryan and Karla’s daughter-in-law Crystal was eight months pregnant with her sixth child. She died with three of her children who were also at the church, and is survived by her husband, John Holcombe and two of her children, according to the Washington Post. John and their youngest child were both wounded and are in the hospital, but are expected to recover, according to a fundraising page set up by Crystal’s aunt. One of Crystal’s last posts on Facebook was to congratulate two of her daughters, Emily and Megan, for placing in their first 4H food show.

Emily Hill, 11; Megan Hill, 9; Greg Hill, 13
Emily, Megan and Greg were three of Crystal children from a previous marriage who died in the shooting.

Carlin Brite "Billy Bob" Holcombe, unborn
Crystal was eight months pregnant with Carlin Brite. Texas law states that the unborn fetus is legally considers Carlin Brite among the victims. The father, John Holcombe, said the family didn't know whether the baby was male or female, but already had a name picked out. He said the name included a pick for a girl, boy and the nickname the kids had committed to.

Marc Daniel Holcombe, 36
Marc, who was Bryan and Karla’s son, died in the shooting with his 1-year-old daughter.

Noah Holcombe, 1
Noah, Marc's daughter, was the youngest person to die in the shooting. She was 18 months old.

Joann Ward, 30
Joann, whose family often attends services at First Baptist, died with two of her daughters in the shooting. Joann's five-year-old son, Ryland Ward, is currently in the ICU after being shot four times. Joann's nine-year-old daughter, Rihanna, survived, and told a family friend that their mother had tried to shield all of them when the shooting began, according to a Facebook post. "I didn't get shot because I was hiding, and momma covered Emily, Ryland & Brooke," Rihanna reportedly said.

Brooke Ward, 5, Emily Garcia, 7
Joann’s daughters, Brooke and Emily, died with their mother in the shooting. “It’s unreal at first,” their uncle, Michael Ward, told the Dallas Morning News. “The church of all places.”

Tara Elyse McNulty, 33
Tara died in the shooting, and is survived by her two children, who “were also wounded but pulled through and have a long road to recovery,” according to a Facebook post by Kevin Koenen, the owner of the Aumont Saloon where Tara worked. “This is a huge loss. Tara was very kind hearted person great employee,” Koenen wrote. The Aumont Saloon is hosting a benefit to cover funeral and medical expenses for the McNulty family on November 12.

Lula Woicinski White, 71
Lula was the shooter’s grandmother-in-law. “My sister was a wonderful, caring person — a God-loving person. She loved the people in her church. They were all her best friends,” Lula’s sister, Mary Mishler Clyburn, told the New York Daily News. Lula’s daughter, Michelle Shields, had allegedly received threatening texts from Kelley, who is her son-in-law. “My sister knew God, and I know that’s where she went. That’s giving me strength,” Clyburn said.

Robert and Shani Corrigan, both 51
Robert and his wife Shani, who lived in Floresville, Texas and are originally from Harrison, Michigan, died in the shooting. Robert was a retired member of the the U.S. Air Force and is survived by two sons, who are in active duty in the military, according to Renee Haley, the Clare County (Michigan) Director of Veterans’ Services. Their third son, Forrest Tyler Corrigan, died in 2016, and his funeral service was held in the First Baptist Church, according to People magazine. The couple attended Harrison High School together, where Robert held the track record for years.

Richard and Theresa Rodríguez, who were married since 2006, died in the shooting. Richard’s daughter, Regina Amador, told People the couple was very involved in their church, and enjoyed working in their garden. “We’ve just been sitting around a table, reminiscing, looking at pictures of them. I can’t believe this is happening, but it’s happening,” Amador said to People.

Dennis, 77, and Sarah Johnson, 68
A family member confirmed Dennis and Sarah Johnson, who were married, both died in the shooting. “It’s still very hard to believe that such a thoughtless crime has happened like this, I hope all the family can find peace in their hearts as they go through this very sad tragedy,” Tawnya Roberts Spence, Dennis’ sister-in-law, wrote in a Facebook post.

Scott, 56, and Karen Marshall, 57
Scott and Karen, who were married, both died in the shooting. “I have no clue where to begin…” Scott’s sister, Holly Hannum, wrote in a Facebook post. “I certainly was not planning on updating fb that the texas church shooting took the lives of innocent people worshiping God and devastatingly 2 of them were my own family.”

Peggy Lynn Warden, 56
Peggy was a volunteer teacher at the First Baptist Church. "My sister spent her whole life working at the church," Warden's brother Jimmy Stevens told WOAI. "There was nothing she would have rather done. And she served people basically her whole life." Warden died while shielding her teenage grandson, Zachary Poston, who survived the attack despite being shot six times.

Keith Allen Braden, 62
Keith, who served in the Army and settled in Texas after being stationed in San Antonio, died in the shooting. His family regularly attended First Baptist. His wife, Debbie, was shot three times, and their 6-year-old granddaughter was shot in the hip. Both are recovering after undergoing multiple surgeries. Keith worked at the local grocery store, and had battled cancer a few years back, his brother, Bruce Braden, told IndyStar. "He was a good father," Bruce said. "He was strict and fair, but loving. He was a good provider and a good husband."