Here's How to Celebrate Fiesta at LGBT Events 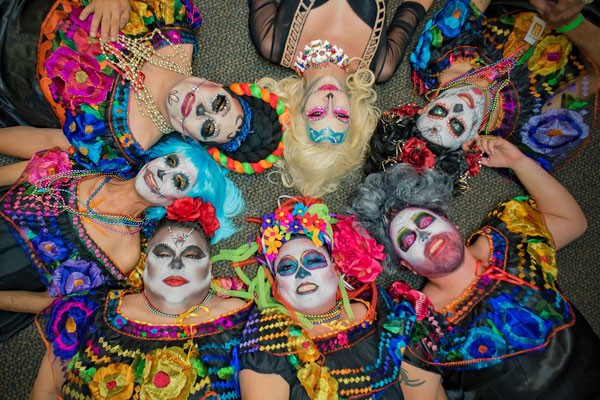 Now in its 127th year, Fiesta San Antonio is an annual festival featuring ten days of parties and parades which this year begin on April 19.

The celebration started in 1891 as a parade honoring the memory of the heroes of the Alamo and the Battle of San Jacinto. It has evolved into one of the premier festivals in the US.

While there is a whole roster of “Official Fiesta Events,” organizations in the LGBT community also stage their own celebrations. Here’s a list that includes official and unofficial events you might want to consider when making your Fiesta plans.

April 20 – The Webb Party
The San Antonio AIDS Foundation’s Webb Party is celebrating its 25th anniversary at the Aztec Theatre with an evening of cuisine tasting, cocktails and dancing. Headlining the entertainment stage is Jinkx Monsoon the noted recording artist and cabaret performer who was the winner of the fifth season of RuPaul’s Drag Race.

The Webb Party became an official Fiesta event in 2004. It is now the San Antonio AIDS Foundation’s most visible and important fundraising event of the year.

Fri, Apr. 20 from 7 to 11 p.m. at the Aztec Theatre, 104 N Saint Marys St. Tickets are $75 pre-sale and $90 at the door and can be purchased online or in person at the Aztec Theatre box office, the Fiesta store, and at the San Antonio AIDS Foundation.

Slated for the first weekend of Fiesta San Antonio, the masquerade party will feature an open bar of specialty cocktails, wine, and cold beer. There will also be a five-course buffet with a fiesta-themed menu prepared by Chef Michael Bomberg.

Guests will be entertained by the Don’t Forget the Music Band, singer-songwriter Laura Marie, the Grupo Folklorico De Bendiciones Dance Troupe, the Matt Tardy and Team Stunt Show, and DJ Rook who will spin tunes all night long.

April 22 – The Chili Queens Cook-Off
The Chili Queens Cook-Off is an Official Fiesta San Antonio Event presented by the Happy Foundation to benefit local charities. Come on down, stir it up and taste the great chili prepared by professionals and amateurs alike. Doors open at 3 p.m. with no cover. Chili judging begins at 5 p.m. There will be drink specials and a Tackiest Queen Contest. This is an 18 and up event. ID required.
Free, Sun, Apr. 22 at 3 p.m., the Bonham Exchange, 411 Bonham St. For more information contact: TheChiliQueens@yahoo.com.

April 22 – Viva Fiesta at Deco
Fiesta San Antonio will be celebrated at San Antonio’s gay-owned Deco Pizzeria during the Deco District Arts and Music Festival which will be taking place adjacent to the restaurant. Brunch starts at 10:30 a.m. with live music beginning at noon. There will be food and drink specials all day.
Sun, Apr. 22, Viva Fiesta at Deco, 1815 Frederickburg Rd. Live music from 11 a.m. to 10 p.m.

April 24 – 26 – Fiesta Cornyation
Fiesta Cornyation has been proclaimed by its organizers as the “raunchiest and cheapest” event of Fiesta. This year’s show, The Court Of Frenetic Frantic Kingdoms, will be reigned over by King Anchovy LII Charlie Biedenharn. The extravaganza is part drag show, part satirical revue, part beer hall bawdy-fest. Since becoming a non-profit organization, Cornyation has donated over $2 million to local charities. Apr. 24, 25, 26 at 7 p.m. and 10 p.m. at the Charline McCombs Empire Theatre, 226 N. St. Marys Street. Tickets are available at the Empire/Majestic Box Office and on Ticketmaster.com.

April 27 – Battle of Flowers After Party
The Battle of Flowers Parade passes along Alamo Plaza in front of the Menger Hotel, an area where traditionally LGBTs gather to watch to the parade. After the parade, many revelers head over to the Bonham Exchange for an unofficial after party that continues until the early evening. Fri, Apr. 27 at the Bonham Exchange, 411 Bonham St. Doors open at 10 a.m.

April 28 – Fiesta Finale Block Party
The final night of Fiesta will be celebrated on the Main Avenue Strip with a block party in front of Sparky’s Pub, Luther’s Cafe, Heat Nightclub and Knockout Sports Bar. There will be live music, vendors, food and fun. There is no cover for this event.