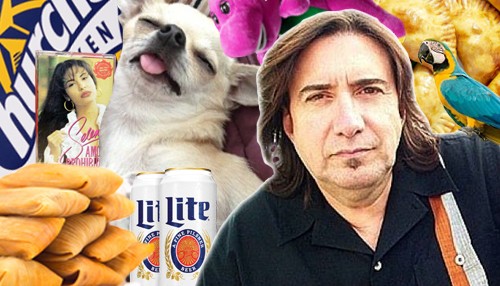 If you lived in San Antonio in the 1990s, chances are that at least once a year around Christmastime, you would hear the South Texas “cholo” version of “The 12 Days of Christmas” on local Tejano radio station KXTN.

If the song parody somehow never crossed your radar, it replaces the lyrics of the original tune with ones that would resonate more with South Texans than, say, “10 lords a-leaping.” For example, “my true love” is replaced with “my ruca” (Spanish slang for girlfriend), “five golden rings” is replaced with “five Selena tapes” and “a partridge in a pear tree” is replaced with “a perico in a stupid little tree.”

Adding local flavor to the classic Christmas song was Jonny Ramirez, who landed a job as a DJ for KXTN in 1993. Ramirez brought the idea for the parody song to promotions director Lupe Contreras. At the time, he and Contreras hosted the morning radio show “Los Two Dudes.”

“We were out having beers and I told him, ‘Hey, I have a great idea for the Two Dudes,’” Ramirez told the Current during a recent interview. “I told him about the song and how we should have two dudes from the West side or the South side [sing] it instead.”

Contreras loved the idea, so Ramirez sat down “with half a bottle of scotch whiskey” and started writing the new lyrics — although Ramirez doesn’t like using the term “writing.”

“I wouldn’t say I ‘wrote’ the song,” Ramirez said. “I just took bits and pieces of things we could relate to. I mean, we love Church’s Chicken. Selena was blowing up at the time. I wasn’t trying to win an Emmy or Golden Globe or anything. I just wanted to entertain people for 10 minutes on their way to work and put a smile on their face.”

Ramirez is a humble man. He also wouldn’t consider his and Contreras’ performance of the song as “singing” either.

“Let’s say we ‘acted’ it out,” Ramirez said. “All these singers have gone out there and paid their dues for all these years, I’d hate to say that I just came along and sang the song. We tried to project our voices, so it wouldn't sound too bad.”

After more than 25 years since the novelty song first hit the airwaves, Ramirez, who now broadcasts Tejano music online at Fierro HD at radio.com, is surprised people still remember it.

“It wasn't brain surgery,” he said. “We weren't redoing the wheel. We were just messing around and having fun with it, man.”

Below are the lyrics to former KXTN DJ Jonny Ramirez’s “12 Days of Christmas” parody. It was performed by Ramirez and Lupe Contreras of the KXTN morning show “Los Two Dudes.”