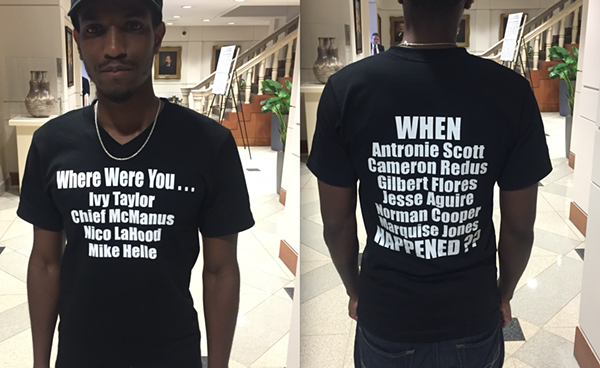 To kick off their first meeting, the group Mayor Ivy Taylor gathered to discuss police-community relations went around the room inside Sam Houston High School Wednesday night to talk about their own personal encounters with cops. Some told the group how they grew up around police, knew some officers from the neighborhood and always felt comfortable around law enforcement. Others, however, didn’t have such fond memories.

“There were people who have vivid memories of extremely negative interactions either they or their family members have had with police,” Taylor told the Current. “One woman talked about her father being beaten by SAPD. Another person recalled being a carefree teenager, being dressed in the latest style and hanging out with friends when she was stopped by police and told she fit the description of a gang member.”

Wednesday night was the inaugural meeting for a group of more than 30 citizens, community leaders and activists the mayor appointed to her so-called Council on Police-Community Relations following the bitter passage of a new five-year police union contract earlier this month. To the disappointment of many – including activists, the Castro twins and council members Rey Saldaña and Ron Nirenberg (the only two to vote against the city’s deal with the San Antonio Police Officer’s Association) – the new contract doesn’t include any reforms to San Antonio Police Department policies or disciplinary procedures. In the end, neither the mayor’s office nor union would budge on what many considered to be the lowest of the low-hanging fruit of police reform: fixing disciplinary rules baked into the union contract that effectively cover up officer misconduct after enough time has passed (some say the policy amounts to government-sanctioned falsification of records). Emotions were running high by the time the contract went up for a vote. Councilman Alan Warrick, who represents historically black communities on the east side, fought back tears as he tried to justify his vote approving the contract over the jeers from some Black Lives Matter activists who flooded the council chambers.

All of which means the members of Taylor’s police-community relations task force have their work cut out for them. In a phone interview with the Current Thursday morning recapping the meeting, Taylor defended her decision to keep the group’s first gathering closed to the media and public (she says it was on the advice of UTSA criminal justice professor Michael Gilbert, who suggested members might be more willing to open up without the pressure of an audience).

When it was his time to talk, Mike Lowe told the group about his own arrest by SAPD at a protest last summer for carrying a sign that read, in part, “Free The People Fuck The Police Film The Police.” The police report for his arrest says officers told Lowe to lower his sign or cross out “Fuck” because it was offending small children. Lowe says he was put in handcuffs after he refused.

Lowe, part of a growing crowd of local activists who call themselves SATX4, says he’s still conflicted about whether to participate in the mayor’s group. “I want to support her (Taylor) as a black woman who’s mayor of one of the largest cities in the country,” Lowe told us on Thursday. “But I’m also anti-police brutality.”

At the meeting, City Manager Sheryl Sculley passed out a four-page memo on various reforms at SAPD since San Antonio Police Chief William McManus took over for the first time in 2006. They include making cops actually take domestic violence calls seriously (tracking down or filing arrest warrants for fleeing suspects rather than just writing up the report and hoping the situation resolved itself), the 2009 creation of the department’s so-called Chief’s Advisory Action Board to review internal affairs investigations (which doesn’t have subpoena power and only makes recommendation to the chief, whose discipline against an officer may not even hold up anyway if the officer takes the case to arbitration) and more training for how officers should respond to people in psychiatric crisis.

Lowe called those “incremental steps” that don’t address the fundamental problems that drew protesters out to City Hall last month to criticize the new police union contract: a police department that’s more likely to use force against people of color; a city where officers might beat you if they mistake you for a suspect or shoot and kill you if they mistake your cell phone for a weapon; a police department that, after enough time has passed, is forced to overlook past misconduct when deciding how to punish an officer.

Mayor Taylor said she hopes to keep the group’s conversation focused on specific problems facing San Antonio, even as police shootings, like this one in Tulsa last week, continue to dominate the national news. When we asked Taylor what those specific San Antonio issues are, she said her task force will probably have to splinter off into separate committees to study and determine that answer.

We asked Lowe if the group, during its first meeting, talked about any specific problems that need to be addressed when it comes to policing in San Antonio. “We didn’t even get there,” he said. Lowe also said he’s not sure how long he’ll be able to stick around if they don't get there soon.