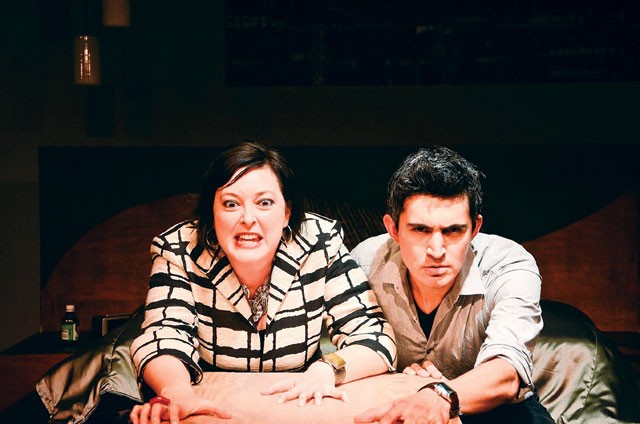 According to the familiar nursery rhyme, when the cow jumped over the moon, it caused the little dog to erupt into laughter. There is much mirth in The Little Dog Laughed, but it usually comes at the expense of three characters serving as foils to a fourth's pungent wit. Douglas Carter Beane's 2006 play is a sparkling screwball comedy struggling against an earnest but banal story of boy meets boy. Despite the estimable efforts of an outstanding cast skillfully directed by Tim Hedgepeth, Beane's heartfelt drama of sexual awakening and his comedy of bad manners mix as well as oil and watermelon.

According to his agent Diane, Mitchell (Travis Treviño), a Hollywood actor, is "suffering from a mild, recurrent case of homosexuality." Drunk and lonely in a New York hotel room, he sends for a male hustler. His hired hunk, Alex, is anxious to point out that he goes down on men just for the money ($200 per trick) and that he has a girlfriend. (The clinging girlfriend, Ellen, energetically played by Amanda Golden, seems an afterthought not only to Alex but also the playwright). Mitchell, too, insists that he hired Alex just as an experiment, that he is not really gay either. "You're like Huckleberry Finn on a raft with a rent boy," observes Diane when she catches Alex and her client flagrante in the buff. "I like you in clothing," she tells Alex the next day. "It suits you."

A budding romance between Alex and Mitchell threatens to derail Mitchell's promising career and sabotage Diane's projects. According to the Hypocritic Code of Hollywood, a straight actor who plays gay is a master of his craft, whereas an openly gay actor is … a pariah. The Little Dog Laughed is the story of how Mitchell tries to sort out his sexual identity without sacrificing his shot at stardom.

Emily Spicer's Diane is a sassy, effervescent presence who lights up the stage whenever she appears, often in garish attire. A cynical lesbian who, while seeing through the phoniness of show business, masters it by doubling up on others' duplicity, she oozes pizzazz even while reciting details of a legal contract. However, she is also the beneficiary of most of Beane's best lines. "Talking to you," she says to Mitchell, "is like sewing a button on cottage cheese." Treviño's Mitchell must make do with lame pronouncements such as "I don't want any more bullshit in my life." He is reduced to telling Alex, "I just want to be with you." Alex stutters: "We fit." Fit to be tied by such triteness, Diane is at least honest in her scorn for conventional sincerity. When her word of honor is demanded before concluding a production deal, she replies: "You're asking a whore for her cherry."

The most compelling scene — staged inventively — occurs when Mitchell and Diane do lunch with an unseen playwright whose work they are intent on buying, adapting, and vulgarizing for the screen. Each takes turns flattering, cajoling, and bullying the man into submission. The hoary cliché that Hollywood is the demesne of mercenary Philistines and New York the haunt of quixotic starving artists (see the Coen brothers' definitive take in Barton Fink) is both mocked and reaffirmed.

"We must always be laughing," advises Alex, who has scant reason to chuckle. With The Little Dog Laughed, the Cellar Theatre offers an evening of intermittent merriment. It is Diane who, invoking that nursery rhyme to insist that successful screenplays must end happily, gets the last laugh. If the dish runs away with the spoon, who gets the fork?