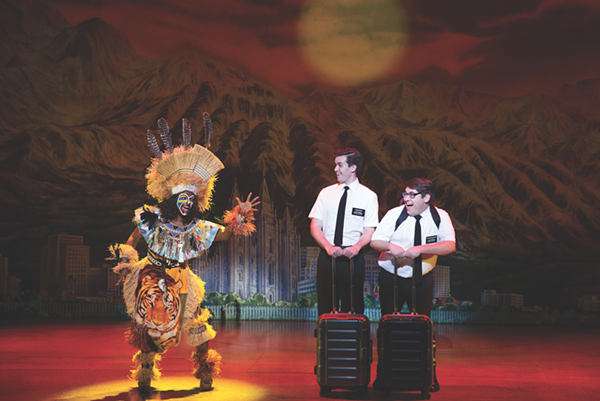 Ah, remember the halcyon days of 2011, when the tackiest spectacle in America wasn’t the Trump administration? When we worried about intentionally gauche spectacle, such as the gloriously crass The Book of Mormon? Yes, turn back the sundial to that innocent, prelapsarian time, when art could actually outstrip Twitter in offensiveness, and revel in Trey Parker and Matt Parker’s brilliant evisceration of the most American religion this side of Capitalism: The Church of Jesus Christ of Latter-day Saints.


As a musical, The Book of Mormon’s plot couldn’t be more unconventional: following the adventures of two hapless missionaries in Africa, it marries bright and sunny comedy tropes to the unlikeliest of topics, including AIDS, genocide, homophobia, and a harrowing descent to the very pit of Hell. (The catchy score is by Robert Lopez, who soon struck gold again with the scores to Frozen and Coco.) For BoM’s return to the Majestic Theatre, the tour features Kevin Clay and Connor Peirson, who have been racking up impressive critical accolades (San Antonio is next after whistle-stops in Austin and Oklahoma City). So grab your tickets to a profanity-laced evening that’s actually less abhorrent than Fox News, and escape our present nightmare with the unlikely salvation of The Book of Mormon.