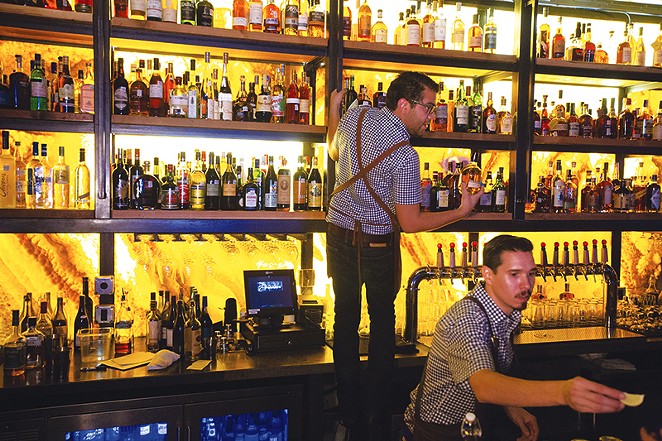 Chris Ware could still manage a smile in mid-August when first interviewed about the long-awaited, much-delayed opening of Paramour, the extravagant new bar atop the equally exuberant Phipps Building on 9th Street in the Museum Reach area.

"A year and 16 days," he said at the time — without batting an eye or betraying any visible angst. At a year and 27 days, the soft opening date, his grin was ear-to-ear.

Ware did go on to admit that a gestation period of such unprecedented magnitude tends to lead to rumors: the bar would be reservations-only; there would be both a dress code and a cover; and (this was my speculation) that the bar staff hired at the beginning had all scattered to the four winds in the interim.

"We didn't lose one bartender," says Ware. "Cory, Jake, Andy, Johnny, Matt ... they will all be there." And many of them were, all resplendent, as was Ware, in leather aprons made for them by FoodWhore's Roger Treviño. Reality and the rumor mill had little in common on the other points, as well.

"We will take reservations, but we aren't reservations-only," said Ware. "And there is no cover or dress code."

If the opening crowd was any indication, you might nevertheless want to forgo your usual flip-flops and ripped T-shirts — at least until the luster of Paramour's newness wears off a tad. For the other thread of the rumor web is true: this is the city's most jaw-dropping watering hole. At the time of our interview, there was furniture still scattered along corridors awaiting placement. For the opening, posh seating groups had been set up inside and out, Big Ass fans (their proper name) twirled lazily overhead, neon glowed perhaps a little too brightly (lighting balance is an issue to be resolved in time, along with music) and only the bar stools lining the terrace railing were not taken.

But despite the beautiful-people buzz, it was still easy as darkness descended to be entirely entranced by the world beyond those railings: the illuminated SAMA façade never looked so good and, in the other direction, the SA skyline actually looked – forgive me – like a twinkly, urban OZ. (Inside, I'm told, the best views are in the ladies room featuring a photo mural of a buffly recumbent Burt Reynolds on one wall and a young, barely beJockeyed Tom Selleck on another.)

There are two separate rooftop bars at Paramour. The one servicing the terraces focuses on champagne, though cocktails are available. The interior bar, dominated by a backlit wall of honey-toned onyx, shares a tap system but is devoted to beer and specialty cocktails. With the exception of one, extravagant specialty drink with Johnny Walker Blue, Liqueur 43 and añejo tequila, all cocktails are $11. The Call Me Cait employs vodka, citrus and Thai chilies and the Marfa Rising counts on tequila, prickly pear cordial, lime and sparkling Vouvray for its considerable appeal. 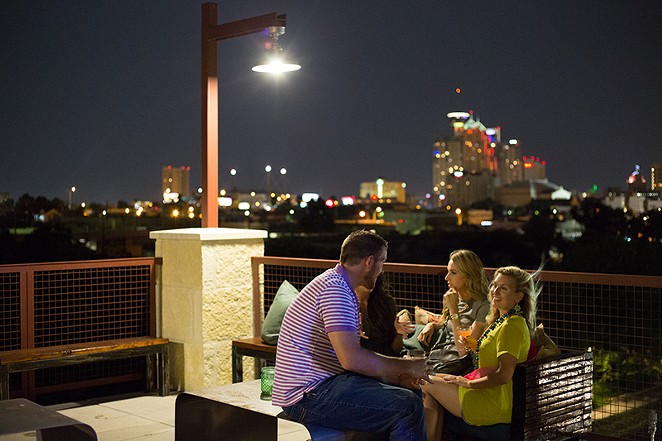 Not much skill beyond the ability to dispense a drink into a lowball glass equipped with a single, perfectly clear ice cube is required to appreciate one of Ware's barrel-aged cocktails and despite the dexterity required of the more complex libations, these remain personal favorites. Ware instituted the barrel-aging program at the now-defunct Arcade Midtown Kitchen and its closing meant that he could recuperate some of those barrels previously left behind. The Old Fashioned, aged 10 months, is at the top of its game right about now. Gin fuels a 14-month-old Warehouse with Cocchi Americano and dry vermouth.

One other skill Ware's bar staff might not have been asked about in job interviews is the ability to monkey up and down the back bar to reach bottles on high shelves. Ladder-like slots have been provided below the rear counter and these, combined with grab bars on the upper shelves, mean that there will be more physical activity behind the bar than simple shaking. Despite its aura of running smoothly from the get-go, Paramour is currently operating on a temporary certificate of occupancy. Some elaborate sprinkler work has yet to be completed, for example, so Ware's ability to keep smiling may be further tested in the days and months to come. But it's built and they will come – of that we're sure. Everybody exhale.