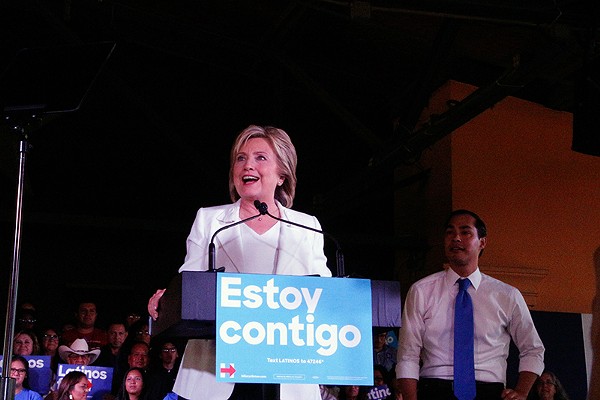 She came, she saw, she spoke a little Spanish.

Former Secretary of State Hillary Clinton, the front-runner for the Democratic presidential nomination, addressed a crowd of thousands today at Sunset Station in an attempt to woo the growing bloc of Latino voters.

The event kicked off Latinos for Hillary, the Hispanic outreach arm of her campaign. Stylized prints of Clinton that featured the text “La Hillary” above a line reading “¡estoy Contigo!” were placed around the venue.

Clinton emphasized her experience with organizing for Democratic presidential candidate George McGovern in South Texas in the early 1970s. At an interview before the rally, she threw darts at Republican presidential candidate Donald Trump for his rhetoric toward Latinos, and chided the Texas GOP for pushing restrictive voter ID laws.

“Republicans are doing everything they can in this state to make it harder for people to vote," Clinton said. "I have a very different philosophy. It's the one that led me to knock on those doors in the [Rio Grande] Valley and to walk on the streets of San Antonio. I want you to be able to vote no matter who you vote for.”

Castro’s been rumored as a potential vice presidential pick for Clinton. She said before the rally that she was “thrilled” to have his endorsement.

"I am going to really look hard at him for anything because that's how good he is," Clinton said at an event before the rally put on by the U.S. U.S. Hispanic Chamber of Commerce.