Hills & Dales Is Still Center of the Universe, Despite Changes

Opened 50 years ago, Hills & Dales only had two owners before this summer when Jody and Steve Newman signed the lease on the legendary bar. Now, if you're reading this and don't have a clue who the Newmans are, you probably don't enjoy patios, or craft beer, or food trucks or Southtown. After opening The Friendly Spot Ice House in 2009 and Alamo Eat Street Bar in 2012 (and the now-closed Tuk Tuk Tap Room), the Southtown denizens decided to spread their footprint outside their comfort zone — way out past 1604 and Babcock Road.

The acquisition makes sense as the pair has shown commitment to craft beer and chill places. Though the purchase was met with a mix of both glee and apprehension when first announced, the Newmans have tweaked more than they have altered. In the spirit of full disclosure, I never enjoyed the joint during my time at UTSA, but a recent visit didn't scream of newness. 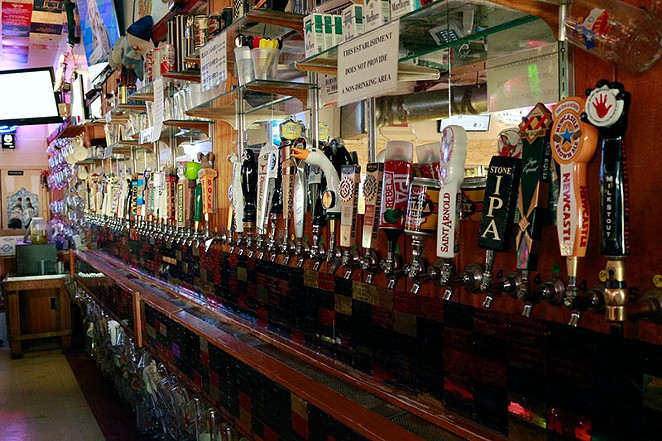 There are plenty of changes. For starters, the tap system received a makeover by the Steve-owned and operated Newman Project. Draft lines were re-routed, kegs were organized and the draft room went through a good scrub down. The lineup still features 54 brews on draft, and the Hall of Foam is still very much so available for those willing to try all 54 beers, six times over. Hundreds of placards — ranging from just over business card-sized rectangles to large stars and even bigger signs — are displayed from just about every inch of the ceiling and along the bar. Also, how exactly does one find time to drink 54 beers, times 6, times 16, as some of those signs claim?

Aside from the beers, two major physical changes are of note. There's the addition of the Friendly-esque patio in what used to be a parking lot and biker haven. It's a good modification to the bar, which already featured rustic outdoor picnic tables, though it isn't as soothing as its Southtown counterpart, which is showered with a lush canopy and sits in a neighborhood not adjacent to a busy 1604 Frontage Road. Once inside the joint, you'll find another bar added in front of a wall of beer fridges — a hindrance for those used to grabbing their own bottles, but not really an issue if you didn't know it was there before.

Since the Newman takeover, the bar has also added more viewing parties, pint nights and such. Things to know for future bar-goers — there's a parking lot behind the building, so you won't have to use any of the Taquería Agua Calientes spots next door.

The populace hasn't changed a whole lot, according to a few friends who frequented the Center of the Universe. During my visit a few weeks ago, the makeup of the bar included older beer lovers and a sprinkling of chill students. A tiny stage takes up the left-hand corner and a few made use of the dartboards in the back, but for the most part the long picnic tables were filled with small groups of UTSA professors and faculty, drinking in an IPA or two and livening up the joint in the evening with some country jams from the jukebox.

On the snack front, there are a few nuts and jerkies to gnaw on. Or you could hop across the street and pick up a Vietnamese bún bowl (go with the brisket, trust me) from Singhs Vietnamese food truck. If fresh-made spring rolls and báhn mì aren't your jam: a) we can't be friends, and b) you can stroll on over to sister food truck, Buddha Belly, where the crew cranks out classic American "sliders" made with angus pork and chuck. The Thai "chili" tots are a must, and the guys deliver to Hills & Dales. Burgers and great beers should be enough to make you drive over right now and join the Hall of Foam club.