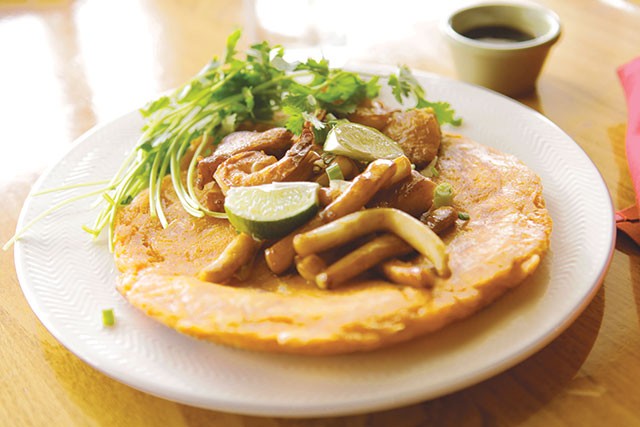 I’ve never been much of a gambler in the traditional sense. I hate scratch-offs (they make my nails dirty), I’ve never understood over/under math and the only reason I’d go to Vegas is to watch Britney’s residency at Planet Hollywood. But part of my job is gambling—taking a chance on a new restaurant, visiting for my review, waiting for the menu roulette to stop and hoping to any sort of higher power that it won’t suck.

The restaurant took over the location of the first Cool Café on the Northwest side of town in mid-February. There weren’t very many bells or whistles, just a quiet little opening, but I had hopes for this strip center joint that promised a variety of kimchis and Seoul classics.

The no-frills space is a far cry from its predecessor with its bright green walls, Persian rugs and beaded drapes. In its place is somber wallpaper and black booths. Matter-o’-fact servers let you choose your own seating and leave you with the menu, which is broken down into starters and savory plates, rice and noodles, “From the Grill,” “East meats West,” specialty entrees, salads and “Seoul Food.” For starters, the menu’s an overwhelming mishmash of authentic, fusion and outright American eats.

My dining companion opted for country spring rolls; the flavor was spot-on, but their icy cold centers just bummed me out. The Korean Flapjack, on the other hand, was fluffy, light and just barely spicy. It would have made for a win, if the squid it was topped with wasn’t tough and rubbery.

Should have stuck with the bulkogi. Let’s call this breaking even. For our appetizers, I took the safe route and ordered the standard beef bulkogi of marinated sirloin with onions and garlic. The portion was decent, and there was no gristle to be found on the otherwise flavorful beef, but I was disappointed by the kimchi offerings. The standard was too watery, the turnip kimchi a bit too ho-hum, the tofu variation might have saved the sides but only by a hair. Another draw.

Over on her end, my dining amiga ordered the kimchi-fried rice with chicken. The rice was gummy and overcooked, likely watered down by the namesake kimchi, but the chicken was flavorful, tender and moist.

Frustrated, I returned for my lunch visit and decided to give more adventurous items a shot. Served 11 a.m. to 3 p.m., the lunch gets to the point by just offering few specialties, although the full menu is available. The description for the Kogi S.A. Burger was tempting, “toasted bun with beef bulkogi or spicy pork, fried kimchi, fried egg, Kogi sauce (which I suspect was a spicy mayo) and Pepper Jack cheese.” There were too many things going for the burger for it to go wrong, right? Kogi continued playing with my feelings by delivering a sad-sack burger and straight-out-of-the-bag crinkle-cut fries no Instagram filter could help. Memories of soy-based cafeteria patties filled my head—perhaps I’d have better luck at another table?

Never the biggest fan of K-Pop, and still harboring an irrational amount of blind hate for 2012 phenom PSY, I had pledged not to try the Gangnam Style street tacos. Yes, that’s a thing. on a menu. in San Antonio. The mere idea of the dish left me with a horrible sense of doom. But with not much left to lose, I ordered the tacos from the a la carte menu and waited. Four corn tortillas, humbly presented, topped with spicy pork bulkogi, onions, cilantro and Kogi sauce were delivered to the table, and damn if they weren’t flat-out good. I figured I’d cut my losses and vamoose before falling prey to the house again.

Perhaps instead of whitewashing layered Korean eats, the owners of Kogi should play up their San Antonio ties and head South, blending Korean red chili pepper flakes and Mexican chiles for a hot mix of fusion. For now, a visit to Kogi means flipping a coin and hoping you get lucky.