June 21, 2019
comment
Local fans of “My Favorite Murder,” a true crime comedy podcast, air their grievances, ask for advice and share their own hometown murder stories in a Facebook group dubbed SATown Murderinos.

Described as “a group for true crime lovers to come together and discuss their passion without judgement,” it was created in November 2016 and currently has 999 members, though that number is steadily growing.

Karen Kilgariff and Georgia Hardstark host MFM, which snags 30 million downloads per month and regularly lands in iTunes' top 10 podcasts, according to the LATimes. The duo recently published a memoir, Stay Sexy and Don’t Get Murdered, and frequently tour to perform sold-out shows to international audiences.

The popularity of the podcast has turned its listeners into a sort of cult, complete with its own slang and inside jokes. Phrases such as “NMR” and “SSDGM” are scattered throughout the page like confetti. To the non-listener, these translate to “not murder related” and “stay sexy and don’t get murdered."

During the podcast, the hosts often use “fuck politeness” as a battle cry against society’s expectation that women treat everyone kindly regardless of their own discomfort in a situation.

Anita Mena, a San Antonio resident, said she puts this advice into practice, especially when she's out with her toddler. She and her daughter were recently playing at an empty park when a man walked up and sat at a nearby picnic table. Mena said she decided to play it safe and leave.

"I try not to be too weird or too overprotective, but there will be certain situations where I’ll be like, 'Nope, we don’t need to be here alone with a man,'" Mena said. "(The podcast) hasn’t made me scared of people, but now I have a heightened sense of awareness."

In addition to true crime, hosts Kilgariff and Hardstark frequently discuss their own personal struggles. Listeners such as Val Martinez, another local, find comfort and solidarity in this willingness to discuss tough subjects openly. After falling on hard times, she asked the San Antonio group if anyone needed help with cleaning or other tedious tasks.

Martinez said the woman who hired her trusted her enough to send her home address without meeting in person first. Judy Marquez, another murderino, said there is an "unwritten sense of trust" in the group because everyone is so like-minded. "We all relate to Georgia and Karen in some way, which is why we love this podcast, and why our local subgroup is so tight knit," Marquez said.

Besides being a supportive group that discusses mental health and crime, it is more generally a band of (mostly) women who chat and ask each other for favors. One user began her post with “NMR…” asking to borrow a formal dress. Another woman asked if anyone in the group was a tattoo artist because she wanted to get tattooed “in a safe space while supporting a fellow murderino.”

A local artist and member of the group who requested to remain anonymous creates art inspired by the podcast. She hosted a small art show at Philocoffee in February, and murderinos such as Mena came out to support her.

“While I believe that the cases reviewed by Karen and Georgia can be anything from amusing to absolutely devastatingly heartbreaking, that each case has a value and a purpose,” the artist said. “And art is one of the most purposeful things you can do.” 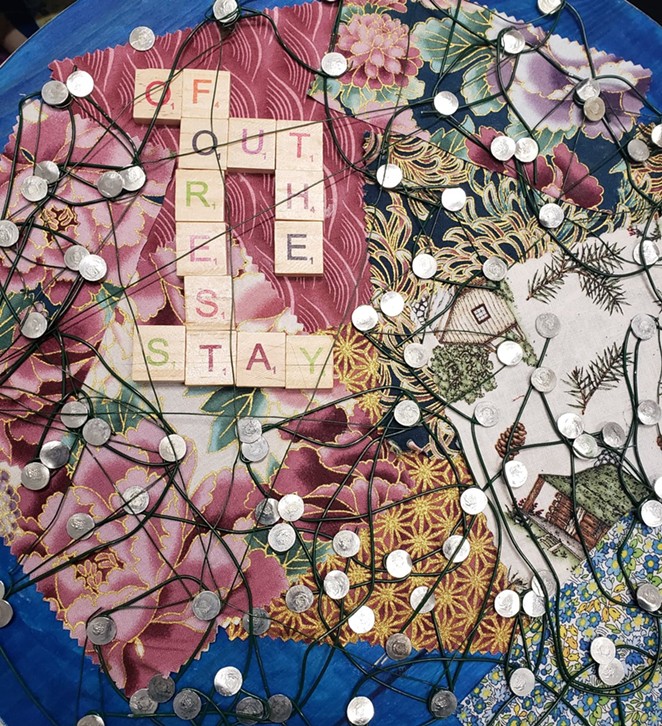 SATown Murderinos admin La Vee started her own podcast, Thrift Therapy, after being inspired by MFM. She said MFM is funny, authentic and normalizes mental health issues, and she incorporates these themes into her own show.

"I just started it on a whim, like I literally recorded it in my car on the way home from the thrift store and published it that day," La Vee said. "They really talk about the normalcy of struggling with our mental health and I love that, so I do that too on my podcast."

San Antonio isn’t the only Texas city to embrace MFM culture. Austin’s murderino group has more than 4,000 members, and prioritizes meeting each other in person, whether it be for trivia nights or playtimes for their kids. The first rule posted by the admins is “Plan meetups!” citing the difficulty to coordinate with such a large group of fans.

Originally, Hardstark loosely moderated a massive Facebook fan group. In 2018, tensions within the group exploded and led to its dissolution, and a schism formed within the fan community. Since then, murderinos have created their own subgroups.

Though many San Antonio murderinos are members of the subgroups, the local Facebook page remains the place to go for help and advice.

"I feel like we get each other without actually knowing each other," Martinez said. "We are all just doing life the best ways we know how and helping each other along the way."