Hitchcock is less about birds, more about the man — and the woman behind him 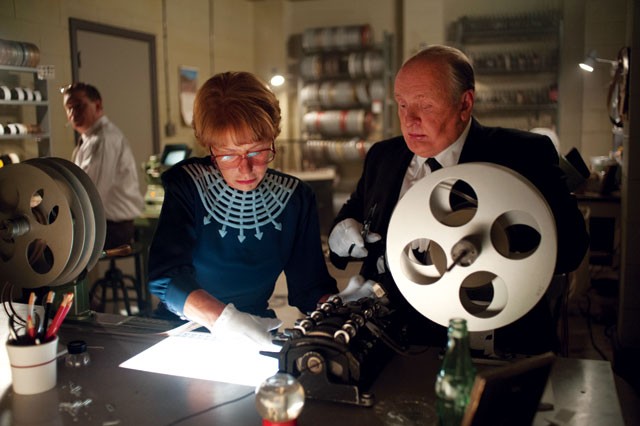 Sacha Gervasi's Hitchcock, based on the lauded 1990 book Alfred Hitchcock and the Making of Psycho, might've been somewhat better served if, while plumbing its source material for story arc and character beats, its crafters had just gone ahead and borrowed the title, as well. The film's scope, unlike its definitive-sounding name, is more intimate than all-encompassing: here is not, say, an A-to-Z excavation of the master's birth, oeuvre, and inspirations, but rather, a smallish portrait of the artist in turmoil, a movie about a guy trying to make a movie. It merely happens, in this case, that the guy and movie are, respectively, as big as ever were.

We enter with Hitch having scored broadly and lastingly with North By Northwest, but unable to enjoy it; he's emptied, harried, a vessel in search of an idea. When the bolt finally comes, it's not what anyone had in mind — and, just like that, the world's most celebrated film director can't get a movie financed, or anyone besides his agent to listen. Except, of course, for the only person whose opinion matters, Hitchcock's most incisive, most important, most invisible collaborator: his wife, Alma.

If you're thinking this sounds like a love story, then I got the words right. On paper, Hitchcock has a number of elements going for it — star power, sex appeal, violence, the Hitchcock name. But the movie, truly and finally, turns on the often strained, ultimately tender relationship between Alma and Alfred, and that's mainly where it succeeds. Otherwise, the movie is fun, but oddly weightless. My most nagging complaint may be, in a way, the least fair: Hitchcock the movie doesn't feel like a Hitchcock movie. Yes, the recreation of the driving scene from Psycho is nigh magical, and the can-it-be-true portrayal of the shower ordeal is arresting, but the film as a whole gave me far less stylistic edge and movie-nerd fan service than I've since realized I must've wanted. And yet, I recommend it. A jaw-dropping Anthony Perkins mimic by James D'Arcy and a beautiful celebratory dance by Anthony Hopkins earn the ticket price, but it's the latter's romance with the luminous Mirren that'll win your heart.