You don't need religion to eat at Leap of Faith Café 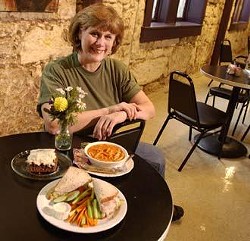 Not to worry: If ever there were someone not qualified to opine on matters biblical, 'twould be I. But the preceding verse is burned into my mind by virtue of its posting on the wall of the group cycling room at the Downtown YMCA - where another kind of burning also goes on - that of the calories implied by this article and all others past and future.

It's also especially appropriate to the Leap of Faith Café, located in the basement of Travis Park United Methodist Church. Connie Marshall, the café's congenial owner/hostess/guiding light, abandoned her two popular Seasons Café and Bakery locations for a subterranean site, which, in spite of exposed limestone walls, track lighting, and displays of art (affecting portraits of homeless people comprise the current show), still seems very much the church basement it is - with long, communal tables covered with oilcloth.

There is more at work here than marketing, and a certain amount of faith is required of the first-time diner; a sandwich board at the street level is the only overt indication of the café's location. It's the only evidence of things not (yet) seen.

The new location hasn't inspired any serious menu changes, though the obligatory cafeteria line makes a daily hot plate special easy to dispense. Sandwiches are the mainstay, but if the Baby Boomer didn't suggest churchly comparisons before, it does now. (Father, forgive me for what I am about to do ... ) With its thickly sliced whole wheat bread, multiple layers of turkey breast, insistent sprouts, chunks of avocado, and a serious smear of mayo, the BB gives off a distinctly Episcopalian aura - conservative, yet with a cautiously progressive, good-for-you edge. All it needs is a good and grainy mustard to make it sing the hallelujah it is so close to uttering. It might also be noted that it is in the details of accompaniment ("God is in the details," according to an iconic early-modern architect) - chips versus carrots and celery with a dip - that the high-church, low-church distinctions are to be made. High-church it with the veggies; the occasion of sin comes later with dessert.

All the sandwiches are good, including the classic chicken and tuna salad renditions, so I tried a couple of daily hot-dish specials out of interest and to avoid Jewish guilt over neglecting part of the menu. King Ranch Chicken was the first, and if you log onto the Internet, it will be clear that my ecclesiastical thesis is in deep trouble from the get-go: There are 32,429 listings. The recipes with cream of mushroom and cream of chicken soup seem to come straight from Munching with the Methodists, a required tome for any true foodie with an ecumenical inclination. Marshall's version is less dependent on canned soup, but it does contain the classic Rotel tomatoes, cheddar, chicken, and corn tortillas.

None of the Internet variations was highly seasoned, and neither is Leap's; it's a comforting, homey dish that benefits from the salsa and sour cream supplied at the end of the cafeteria line. Your most challenging decision will be deciding on the kind of dressing to put on the salad of chopped vegetables with leaf lettuce; the raspberry vinaigrette is a sprightly companion to the casserole. The sidekick corn muffins, on the other hand, were almost Calvinist in their severity; without getting libertine about it, a little sugar wouldn't hurt.

Calabacita con puerco with rice, beans, and flour tortillas was the special on another day; in Texas, this is a non-denominational dish. But it can get its Catholic chops with the addition of garlic, chiles, oregano, and a little toasted comino. Leap's version is more reformist-minded; it trades a potentially heady, incense-inspired approach for a more sober rendition with lots of corn and zucchini partnered with a little tomato, onion, and chunks of pork. The rice is Shaker-like in its simple seasoning, and the pintos are relentlessly pure, almost Platonic. No speaking in tongues, but no ruler-on-the-wrist, either.

There are numerous daily soup specials, among them a cheesy potato with hints of chipotle chile. This soup is so thick a knife and fork are almost expected, and if thickness is a virtue, then it wins hands down. But as is occasionally the case with Marshall's cuisine, I yearn for more seasoning, chipotle (up to a reasonable limit), salt - charismatic qualities. Still, there was no problem in the finishing of the bowl.

As contradictory is this might seem, the Asian-influenced noodle salad with shredded cabbage and sunflower seeds, all in a light and delicate dressing, is not to be faulted for lack of punch; it works on its own, Unitarian-inclusive terms. And in fact, it was one of my favorite things - until I got to the desserts.

Connie is already famous for her cookies, but prepare to confess later for any of the pies or cakes. The Sunday-go-to-meetin' lemon sour cream pie had the perfect church-supper qualities of rich and creamy, yet lightly tart, filling with a proudly flaky crust. The Reese's chocolate peanut butter cake, on the other hand, was frankly voluptuous. Moist and chocolatey, with enough peanut butter taste to seriously yank my chain, this cake is fall-on-the-ground, tent-revival stuff - with an edge of Earth-Mother Paganism.

So, now that I've offended nearly everybody of a spiritual bent (my apologies to those whom I've omitted for lack of space), let me attempt to atone: Restaurants like Leap of Faith - and there are few of them indeed - make manifest the sacred act of breaking bread, of creating a kind of communion of like-minded individuals without all the trappings of a sanctified ceremony. That Leap of Faith isn't blazing any new culinary ground - or even redefining old territory - is immaterial under the circumstances. It's doing what it has set out to do, namely to provide food of substance at a reasonable price in a non-commercial setting. If the soul gets fed at the same time, well, that's up to you. •