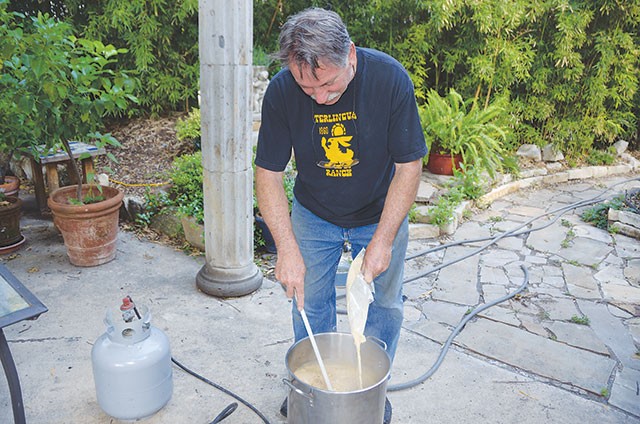 Some craft beer aficionados take the go-local movement to an extreme. Not content to seek out the latest seasonal brew from a Texas brewery, they’re making their own suds at home. Using ingredients sourced from DIY suppliers, they can achieve results that are a far cry from the watery bathtub beer your great-uncle made to survive Prohibition.

At Homebrew Supply on North St. Mary’s, you can choose from a large assortment of imported hops and flavoring agents, buy a shiny glass carboy for fermentation, or take the advice of proprietor Todd Huntress, who runs the small store that also features a bar with two taps — and purchase a starter kit on the cheap, from $25 to about $50.

Jerry Lockey, a homebrewer who prefers full-bodied beers, skips making a mash from grain by using a syrup he buys at the St. Mary’s supplier. Sold as the fixings for a nut brown ale, it produces an almost-black brew with a strong flavor that Lockey enhances with additional hops “to take off the sweet edge,” he explained to the Current while demonstrating his casual, but effective, brewing technique recently at his home in the Beacon Hill neighborhood.

Bringing a gallon of water to just under a boil, he adds the syrup, and extra malt, stirring all the while. “People say of homebrews, ‘It’s strong.’ But it’s not alcohol content, it’s the body you don’t get with Coors Light,” says Lockey. A medical technologist, he prefers to leave science at work, and hasn’t used a thermometer in years. He judges his batch by rough estimation, instead.

He tosses in a bag of ice to cool the mix down, siphons the batch into a glass carboy, then bulks the batch out to five gallons with more hot water. When he guesses it’s around 90 degrees Fahrenheit, yeast is added. Then the first fermentation, about a week, takes place. A second, with another decanting to a carboy, may or may not happen, depending on Lockey’s mood, and how the fermentation’s going. Finally, the liquid will be put into bottles, with extra sugar added, causing a last fermentation in the bottle, adding fizz to the beer.

A few blocks away, Lockey’s friend Steve Lewis, who prefers to go old school and start with grains, decants a bottle of the last IPA he made. Only two weeks old, the bottle opens with a vigorous pop, a good sign. “That looks pretty good, it’s got a nice head, has good color,” Lewis says. “It smells like beer, but the acid test is the taste.”

He tries a glass, and says, “That’s pretty good. I would call this a nice hoppy IPA. That’s how we like them.” Lewis plans to age his other bottles a month more, before chilling them in the fridge. His only concern for the next month of aging? “I hope it doesn’t lose any hoppiness.” Though he says, “I’ve made plenty of batches of bad beer,” this is, no doubt, a good one.