Honey, I Stabbed the Kids: Wrath and Revenge Take Center Stage in 'Medea' 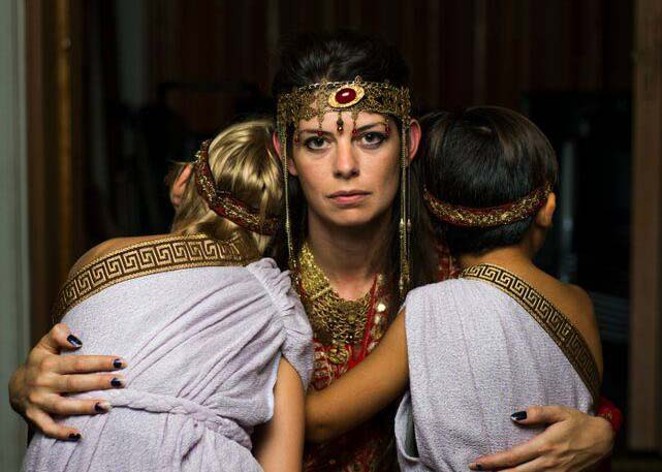 To Sigmund Freud, the family hearth is a perilous space of hostility between parents and children. Seizing on the Greek myth of Oedipus, he claimed that patricide is every son's latent wish. Freud's disciple Carl Jung looked to Electra, who killed her mother Clytemnestra, as a model for matricidal daughters. But the Greeks themselves were also alert to filicide – in the stories of Cronus, the Titan who devoured his own sons, and Medea, who killed Mermeros and Pheres, the sons she bore to Jason.

Jilted by Jason, who aroused such passion in her that she murdered her father and brother at his behest, Medea is a Rorschach for views of women over three millennia. Though an all-male ancient audience, viewing all-male casts, would have seen Medea as a treacherous sorcerer, the 19th century, in love with the power of love, was drawn to her story of tragic eros. In our time, when the FBI reports about 450 children killed each year by their parents, Medea is not only a victim of patriarchal oppression but a lurid tabloid staple.

The version of Euripides' play that director Mark Stringham has adapted for the Classic Theatre begins with a character called the Nurse addressing the audience. Played by Mindy Fuller with a remarkably clear and resonant voice, she fills us in on details that Euripides' audience in 431 BCE would already know – that after fleeing to Corinth with Medea and their two young sons, Jason abandons Medea in order to marry Glauce, the daughter of the king of Corinth. Described by the Nurse as "a simmering stew of misery," Medea plots her revenge.

"Terrible things breed in broken hearts," warns the Nurse, and there is never any doubt about the outcome in Stringham's chillingly efficient production that is accompanied by minimalist music by John Coker and ends in bloodshed and the Nurse's final line: "Can there ever be any ending but this?" Played by Georgette Lockwood as neither monstrous nor deranged but a lovely woman overcome by grief and loathing, Medea declares: "Hate and sorrow are the only things I have access of." Lockwood provides a powerful embodiment of hate and sorrow, though the part denies her access to a fuller range of emotions. Though he tries to make the case that what he's done is best for everyone, Kerry Valderamma's vapid Jason is not a worthy adversary. Jack Dullnig and Logan Treviño are cute as Mermeros and Pheres, but it is not appropriate to fidget when portraying a fresh corpse. As Aegeus, the clueless king of Athens who stumbles into domestic mayhem, Guy Schaafs provides rare levity.

Surveying the bloody aftermath of Medea's vengeance, Jason asks: "How could you have done this?" An excellent question worth a play.