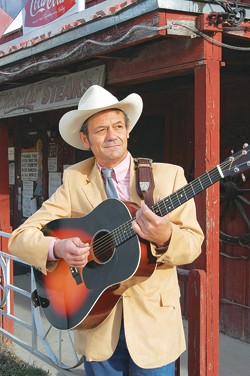 
Country audiences don’t tend to be quite as youth-obsessed as the pop crowd, but even by country standards, putting out your debut national release at the age of 53 is pushing it a bit.

That’s exactly what Waco native - and veteran horse trainer - James Hand did with his 2006 CD, The Truth Will Set You Free, a honky-tonk hayride of an album praised by the likes of Willie Nelson and football coaching legend Darrell Royal.

Hand is comparable to Mississippi bluesmen such as Junior Kimbrough and T-Model Ford, who toiled in obscurity for decades and finally earned appreciation late in life, when most of the great blues titans were gone and authenticity was becoming a rare commodity.

Hand is loaded with authenticity, the kind of authenticity that no amount of earnest, alt-country study can replicate. “Banks of the Brazos” is Western swing in the Bob Wills mode, with a touch of Sun Records rockabilly just to remind you he’s no slavish purist. “I’ve Got a Lot of Hiding Left to Do” is a melancholy, Hank Williams-style weeper on which Hand nearly passes for Hank himself.

Beyond his firm grasp of a fading tradition, what’s most appealing about Hand is that his classicism doesn’t feel like schtick or a political statement, it’s just the most handy musical expression of his weary soul. As he sings on his debut album, Hand is “Just An Old Man With An Old Song.” But that’s not such a bad thing. Free, 5pm Fri, Sam’s Burger Joint, 330 E. Grayson, (210) 223-2830, samsburgerjoint.com.