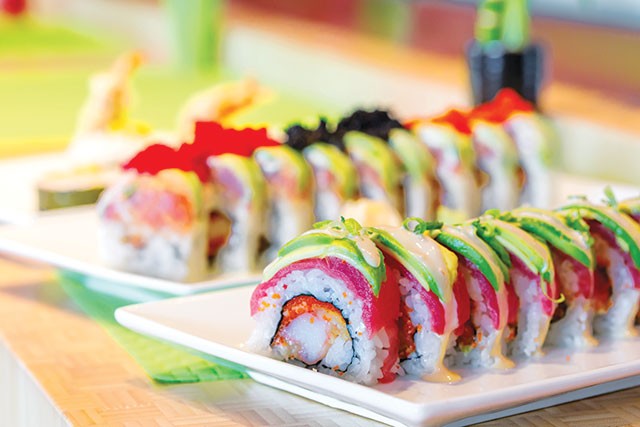 There’s some sort of coming culinary renaissance for SA lands north of 1604. Aldaco’s and La Gloria are both headed up the 1-10 corridor past the loop, while Zoko replaces Auden’s Kitchen. Now, Sushi Seven is cranking out eye-catching sushi rolls inside the former Cool Café.

Opened by a handful of the same chefs and brothers who helped establish Sushi Zushi’s eight locations across Texas (four of which are in San Anto), and a few business partners, Sushi Seven was first opened in Puebla, Mexico. The Stone Oak resto took a bit longer to come together. It currently sits next to a steaming service, a pilates studio and the intriguing Hollywood Pizza (perhaps next time).

The restaurant went as far as taking a hiatus two months after opening to give the space a makeover and the new digs are an effort in minimalist décor. A pop of color anchors each room—a bright red wall features strings of glass spheres adjacent to the sushi counter lined with marble tiles. Tables of all shapes and sizes fill the dining room, which can accommodate first dates and eaters out on a business lunch meeting. A handful of posh black and white booths line the left side of the restaurant, a nice idea to be sure, but the owners might consider opting for a darker hue or at least giving the soy-stained chairs some love.

Yes, the menu has a slew of options including tempura, kushiage (or deep-fried kebabs), fried rice and teppanyaki, but this isn’t Tempura Seven. The 40-plus rolls on the left-hand side of the menu can vouch for that. Much like Sushi Zushi and most recently Yellowfish Sushi on Wurzbach, the rolls tend to skew toward fusion and most are successful at melding Japanese and Mexican flavors (although you’d have to pay me to eat the Sonterrey roll, which is topped with melted cheese, spicy chipotle mayo and Serrano peppers … is this sushi or an order of nachos?).

For my first visit, my dining partner and I tried the James Tower roll ($12) at the suggestion of our server. The same ingredients of rice, crab salad, masago, avocado and tuna or salmon can be found in the James Tower appetizer ($13), which was appealing to be sure, but the crab salad just didn’t do it for us. Its overwhelming sweetness was too reminiscent of Miracle Whip, and there’s no place for that crap in sushi.

A much more satisfying roll came in the similar Tricolor roll ($13) with fried crawfish, spicy tuna and multi-colored tobiko, or fish roe. The wasabi-infused green, squid-ink black and stoplight red roe infused with habanero peppers added a subtle heat. The Habanero roll also drew us in with its promise of spice, which it delivered without overwhelming the experience. Fresh yellowtail topped the roll, while cilantro and avocado were nestled inside for an excellent example of fusion at work.

We paired our rolls with an order of perfectly acceptable squid and seaweed and a chicken kushiage. Crisp on the outside and tender on the inside, the kushiage’s mouth-feel was a bit too oily.

For our lunchtime visit we settled on the bento box lunch specials ($12.99). Available with a choice of nigiri, teriyaki chicken or chirashi rice bowl with agedashi tofu, the bentos also included a large serving of piping hot miso soup in ceramic bowls and standard California rolls.

The only misstep was a heavily salted teriyaki sauce, but the smoky agedashi—two large cubes of lightly fried silken tofu topped with bonito fish flakes—and the green salad were hits. Instead of a syrupy dressing, a light peanut sauce dressed the salad greens without the use of too much sugar. The staff didn’t skimp on the chirashi either, which featured a sampler mix of tuna, yellowfish, salmon, escolar, tako (octopus), sweetened shitake mushrooms and delightful tamago (or Japanese omelet) squares.

If Sushi Zushi is your jam, then a visit to Sushi Seven is probably due. This slightly familial apple didn’t fall too far from the tree.