June 24, 2013
comment
“Are you against science?” asked Rep. Lon Burnam (D-Forth Worth), encapsulating Sunday evening’s Texas House debate over a bill that would eviscerate abortion access in the state.

The House preliminarily passed the legislation 97-33 this morning. The bill is expected to move back to the Senate and be met with a filibuster from Democrats. The special session ends June 26, but the governor can call an unlimited number of those sessions.

A packed gallery of pro-choice advocates, dressed in orange to show solidarity, looked on below to the House floor, where a fight between scientific fact and political ideology waged on into the night. The legislation outlaws abortion after 20 weeks post-fertilization, imposes restrictions on abortion doctors and abortion-related drugs and forces clinics to comply with standards of ambulatory surgical centers, a requirement that would shutter all but five clinics in the state. To top it off, the bill isn’t supported by leading experts who argue the measures are unnecessary, unfounded and detrimental to women’s health, as the Current previously reported. 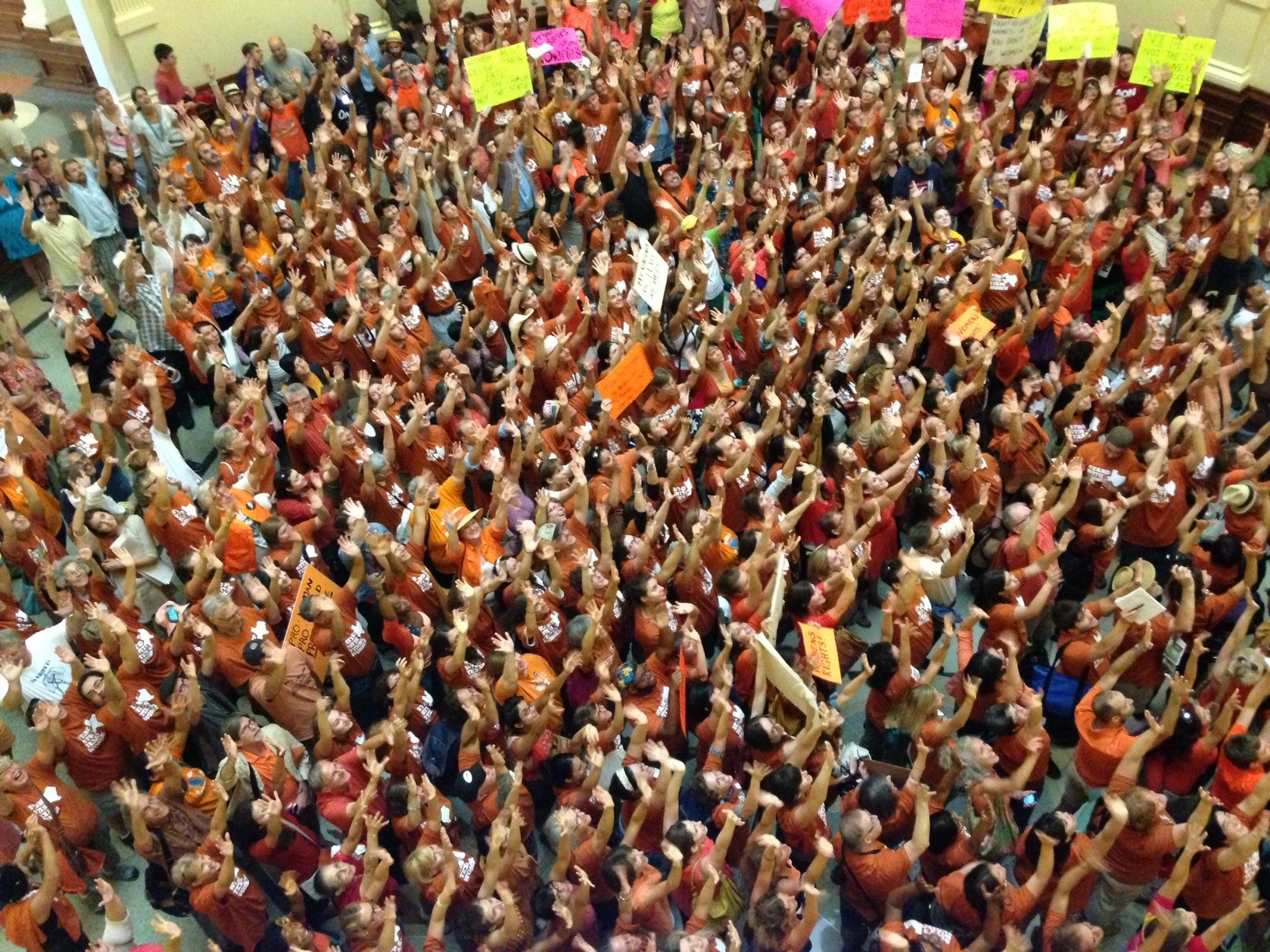 More than 1,000 pro-choice advocates filled the Texas Capitol on Sunday to protest anti-abortion bills that would close down all but five clinics in the state. Photo courtesy of Planned Parenthood of Greater Texas.

After buying nearly six hours of time with procedural delays, Burnam and fellow Democrats burned the midnight oil in a painstaking attempt to demonstrate this to the bill author. Highlighting the legislation’s dearth of peer-reviewed evidence and lack of support from the medical community, they took turns explaining to Rep. Jodie Laubenberg (R-Parker) if you’re going to file a bill that bans abortion on medical grounds, you should probably have the factual data to back it up.

But the Republican demonstrated she doesn’t possess the best grasp on reproductive science– challenging an amendment to make an exception for cases of rape or incest, Laubenberg countered it wasn’t needed because a woman can get “cleaned out” after receiving a rape kit, mistaking the evidence-gathering procedure to abortion, “We have funded what’s called rape kits that will help the woman, basically clean her out. And then hopefully that will alleviate that.”

When legislators asked her to cite where the facts of her bill came from, Laubenberg mumbled out two studies, while House Democrats pointed to major medical consensus which would seem to oppose the bill, including The Journal of the American Medical Association, the Texas Medical Association, the Texas Hospital Association and The American Congress of Obstetricians and Gynecologists. Brushing the entirety of the medical community’s recommendations aside, Laubenberg — who oftentimes seemed hazy about the contents of her own bill — continued to make the case that the legislation somehow improves “quality of care” for women.

But that’s not the real intention, Democrats and pro-choice advocates argue.

“The truth is that these bills aren't about women's health and they aren't about the will of the people — they are about winning Republican primaries,” said Rep. Jessica Farrar (D-Houston) to thunderous applause from gallery seats. “Texas women deserve better than to be used as a tool in partisan politics.”

Furthering the argument was last week’s questionable Tweet by Republican Lt. Gov. David Dewhurst, who posted a message exclaiming, “We fought to pass SB5 thru the Senate last night, & this is why!,” alongside an infographic from Planned Parenthood that shows the bill would “essentially ban abortion statewide,” not-so-subtly suggesting the actual goal is to shut down clinics.

Seeking to ram abortion restrictions in at the last minute, Texas Gov. Rick Perry added the draconian measures to the special session agenda, but as Farrar noted, “Nothing about these bills is an emergency. Surely the expansive public opposition to the bills demonstrates that.”

In an effort coordinated by reproductive rights groups including NARAL Pro-Choice Texas, Whole Women’s Health, and Planned Parenthood, more than 1,000 men and women showed up at the Capitol on Sunday, lining the rotunda and stairs outside the chamber to protest the onerous legislation. While some presence by the blue-clad anti-abortion lobby was felt, they were overwhelmingly outnumbered.

Fueled by their frustration and disbelief in the conservative Republican-led crusade to end abortion access, many traveled far and stayed late to oppose the restrictions. Mary Hiller from San Antonio camped out in the Capitol annex with fellow protestors throughout the evening. She said she was one of the hundreds who got shut out of a House State Affairs Committee hearing last week after testimony was cut short by the GOP chairman, as the Current previously reported.

“People are outraged,” said a tear-eyed Hiller. “What the Republicans are doing is disgusting. It’s going to hurt low-income, minority women the most and they don’t care. Women are going to pay the price and many are going to die. We did this 40 years ago [with Roe vs. Wade], I shouldn’t have to fight the same battle at 69 years old.”