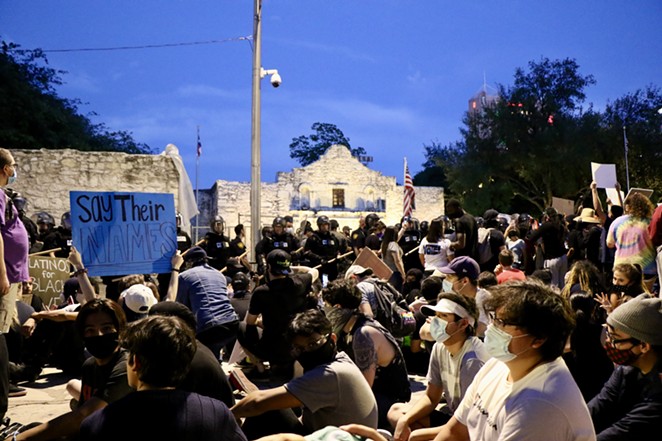 Saturday evening, I marched with 5,000 other San Antonians as they peacefully protested the death of George Floyd at the hands of Minneapolis police. The collective sorrow and rage were palpable. The victim’s name echoed between the buildings of downtown.

The gathering began with a rally at Travis Park. A diverse crowd listened as speakers voiced anger about the United States’ legacy of systematic discrimination, racism and violence. They reminded the crowd that Floyd — a black man restrained by a police officer kneeling on his neck — is only the most recent victim of system rigged against black and brown people and the poor.

At the same time as raised our voices against racism, This Is Texas Freedom Force, or TITFF, a heavily armed right-wing group — some wearing patches showing support for the Confederacy — were allowed to “protect” the Alamo Cenotaph from vandals.

The group's members fetishize the Alamo and its complicated history while showing off its military-style long arms in suggestion that they're prepared to take lives to defend the monument. Although TITFF claimed its members were guarding the site due to graffiti recently tagged on the Cenotaph, a heavy police presence signaled that city officials were aware the group might be on a collision course with those protesting Floyd’s death.

After the march ended, a small group of TITFF agitators, some dressed in Hawaiian shirts — a symbol embraced by far-right groups to signal support for a second civil war — ventured away from the Alamo toward Travis Park carrying their assault rifles. On a sidewalk outside the boarded-up Texan II bar, members of the armed group traded insults with protestors.

For the first time that day, I felt fear. I watched the men insult the demonstrators while the police stood by. One of the marchers, an attorney wearing a tag identifying her as a legal observer, calmly encouraged the demonstrators to disengage.

Still, the threat lingered. So did the anger.

The TITFF members walked back to the Alamo with their hands on their guns, as if they were patrolling Mosul. A dozen angry protestors followed, calling the group fascists. I crossed the street with my camera to document the incident.

One man took his child’s hand and led her away.

From what I saw, police on the ground did little to dispel the tension that built for the next 90 minutes as the separate groups confronted each other. Directly in front of the Alamo, TITFF members brandished their weapons, as if to imply they might shoot if threatened. As more protesters pressed forward, those at the front squeezed chest to chest, shoulder to shoulder. The scene dissolved into insults, death threats and punches.

Dozens of protestors from the march pushed between the fighting, forming a human shield. They linked arms and shouted, “Keep the peace!”

It was easy to see how the confrontation at the historical site might take a deadly turn.

A lone instance of bloodshed did come someone threw a bottle, smashing a TITFF member in the face. The moment seemed to snap everyone back to the reality of how close we were to another tragedy. Both the protestors and his TITFF colleagues stopped to help the injured man, bandaging his forehead as he sat in shock, blood flowing down his face.

Empathy prevailed, at least for a moment.

Later, a block north of the Alamo, riot police and a group of protestors engaged in a separate standoff. It was unclear how the confrontation started, but as I moved closer to shoot photos, police repeatedly fired teargas into the crowd, sending demonstrators and members of the media scrambling.

Three demonstrators walked the streets with open-carried guns. At no time did they provoke the police, making them no different than the armed TITFF members at the Alamo. While a handful of individuals threw water bottles or rocks at the heavily armed cops, most of the protesters on the scene tried to stop their attacks.

Police fired dozens of pepper balls and at least one rubber bullet. The laser sights of their weapons danced red dots over the demonstrators, both armed and unarmed.

As the protesters fell back from advancing police lines, a tiny group broke off and hurled rocks at officers on a side street. This faction smashed the windows of a police SUV, cut its tires and pitched fireworks at advancing cops in riot gear. Because civilian traffic was still allowed into the area, a panicked driver nearly hit me as I crossed the road to flee the mayhem. 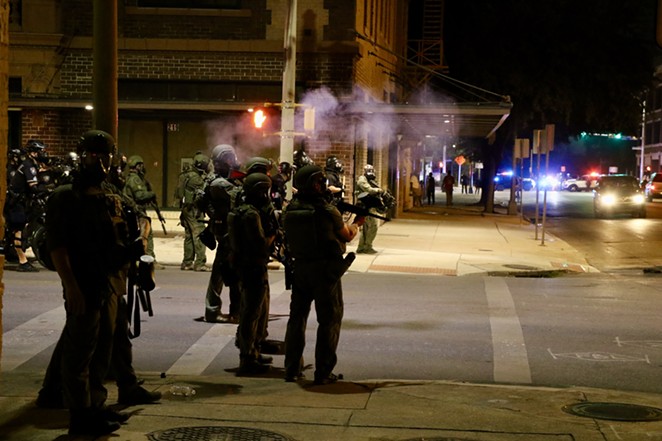 I passed the 65-foot-tall La Antorcha de la Amistad sculpture near Alamo Plaza at the moment a police officer arrived to discover vandals had tagged its surface with anti-police graffiti.

The tears welling in the officer’s eyes showed her disappointment. I imagined the area was on her beat, that she felt she’d failed to protect this symbol of friendship between the U.S. and Mexico. Perhaps there was even sadness for George Floyd as she read his name in the still-wet paint.

For an instant, I stopped, wanting to ask her questions. Then, a hunk of terra cotta smashed on the pavement nearby, so I kept moving. I heard people talk about breaking into nearby River Center Mall.

Still, for all the property damage that night, San Antonio avoided a far more painful outcome. Lives could easily have been lost.

After all, President Trump had taken to Twitter earlier in the week to signal his approval of violence being used against looters. It was easy to see how someone might get the idea that defending downtown property — or a historical structure — is the same as defending the republic.

One man I met on the street carried an AR-15 with what appeared to be a silencer. He told me he was there to keep the peace.