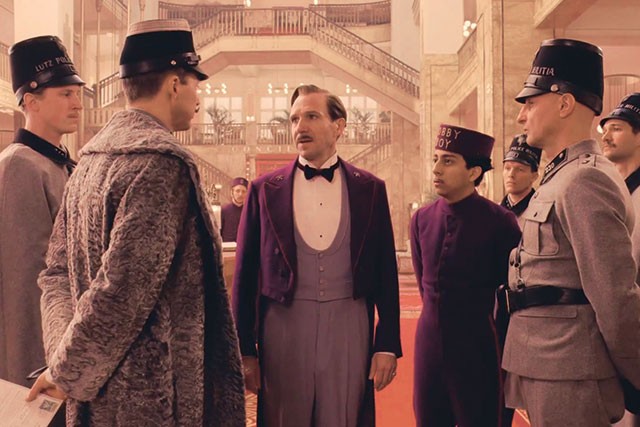 My name is David Riedel. You may know me as a film critic who sometimes writes reviews for the Current. Or you may not. But you’ll probably remember the following sentence because it contains four hot words: “Fucking,” “hate” and “Wes Anderson.”

It feels really good to get that off my chest. I can’t count how many times I’ve been among a group of critics and been the only one who can’t stand the guy’s work. Fucking can’t stand the twee sets, the precious music, the precocious kids who still, after all, are just kids, and the fucking everything else.

(I also don’t like writing reviews in first person but the idea of using such loathsome language really demanded I own it.)

Lest you think I’m without sin and casting the first stone, let me assure you: Nah, I’ve sinned. And fuck The Royal Tenenbaums. Fuck Bottle Rocket (but not as much as The Royal Tenenbaums). Fuck Moonrise Kingdom, and really fuck The Life Aquatic with Steve Zissou. “I’m part gay,” says Jeff Goldblum’s character at one point in that movie. WHAT DOES THAT EVEN MEAN?

And though I haven’t seen Fantastic Mr. Fox or The Darjeeling Limited, fuck them, too. That last sentence is terrifically unfair, but given how I feel about the rest of the man’s oeuvre, why not go ahead and assume I’ll hate those movies, too.

Look, I know I’m in the minority. I’ll probably have my critic’s card revoked, and I can see my screening invitations drying up. I get that there are people who like Wes Anderson. They like the dollhouse feel and intentionally odd dialogue and the long tracking shots and his use of a tripod.

Maybe that’s why I like Rushmore. There was a time when Anderson was fresh. Rushmore is the first wise-beyond-his-years kid in an Anderson movie. It has Bill Murray’s remarkably subtle performance (look at his face when he learns Max’s father is a barber). Maybe it’s Anderson operating on all thrusters before he realized he had an audience and could coast on his perceived charm.

I have no idea what motivates Wes Anderson. Like my predetermined unviewed dislike for Fantastic Mr. Fox and The Darjeeling Limited, it’s unfair of me to speculate.

And that brings me to The Grand Budapest Hotel. Unfortunately for my hate-filled heart, I have to admit it ain’t half bad. Sure, it looks like a hipster’s wet dream and it has a few anti-gay gags in it that are as offensive as the “part-gay” bit in The Life Aquatic with Steve Zissou. (And the villain utters the gay jokes here, so perhaps they can be defended.) But whatever. The movie ain’t half bad.

Sound exhausting? It is, but once the eyes stop rolling, it all becomes a lark. Anderson and his director of photography, Robert D. Yeoman, go to the trouble of shooting each different time period in the aspect ratio of its era. That means the movie is more or less square in the 1930s and widescreen for the present day. It’s incredibly affected, but it’s also kind of charming. Anderson knows his film history.

Once we’ve met all the players in 1968—Jude Law as Young Writer and the underused F. Murray Abraham as Mr. Moustafa—we go to the past and start moving. In the 1930s, we meet Zero (Tony Revolori, who doesn’t have Anderson’s style of dialogue delivery nailed) and M. Gustave, who is played to the hilt by Ralph Fiennes.

Gustave is the Andersoniest of Anderson characters and, as personified by Fiennes, he is funny, absurd, grotesque and enchanting. Gustave runs the Grand Budapest Hotel in its heydey, and he has sex with lots of old women (like, octogenarian old). They dote on him; he looks after them. Life, like the hotel, is grand.

Then, Madame D. (Tilda Swinton), one of Gustave’s lovers, is bumped off. She leaves Gustave a priceless painting, and her rotten son Dmitri (Adrien Brody) accuses Gustave of the murder. Gustave and Zero steal the painting and before long they’re involved in a movie-length chase sequence that has them tailed by Dmitri’s henchman, Jopling (Willem Dafoe, looking not unlike his Max Schreck character from Shadow of the Vampire); aided by an Irish baker’s assistant (Saorise Ronan); thwarted by war; and stopped by soldiers (including an out of place-ish Edward Norton). Gustave is thrown in prison, only to escape with Zero’s and Harvey Keitel’s help.

Those are sort of spoilers, but they’re sort of not, because everything that happens in the caper section (that is, the 1930s) is predictable. You don’t have to have know Stefan Zweig to know the tropes.

The Grand Budapest Hotel is fun, silly and delightful. Sure, the whip pans get to be a bit much and the 1960s and 1980s sections are superfluous, but if a hater like me can enjoy it, imagine how ga ga the fans will be.