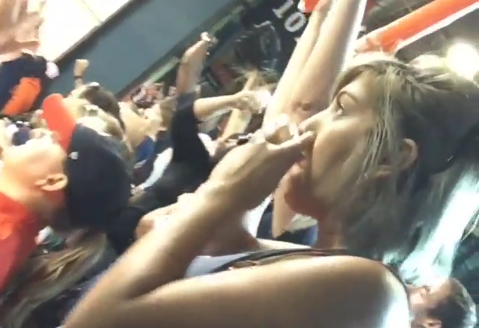 If you're going to sneak a key bump of cocaine in the stands of a Houston Astros game, at least try to not be so obvious about it.

UFC fighter Derrick “The Beast” Lewis shot this video of a fan's not-so-subtle attempt to snort what is presumably coke during the Houston Astros playoff win against the Kansas City Royals last night. The clip, which ends with Lewis shaking his head like the rest of us, quickly went viral online.

Did no one teach this poor young woman to sneak into a bathroom stall? That's coke 101. What are they teaching the kids these days? Then again, stadium bathroom lines are often interminably long. Maybe she thought the wait for the bathroom outweighed the risk of getting caught for not even trying to hide her illicit drug use.

If you insist on snorting coke during a Major League Baseball game, let this short video be your guide on what not to do.

In other news, people apparently still do cocaine.