How Old is Too Old For Punk? 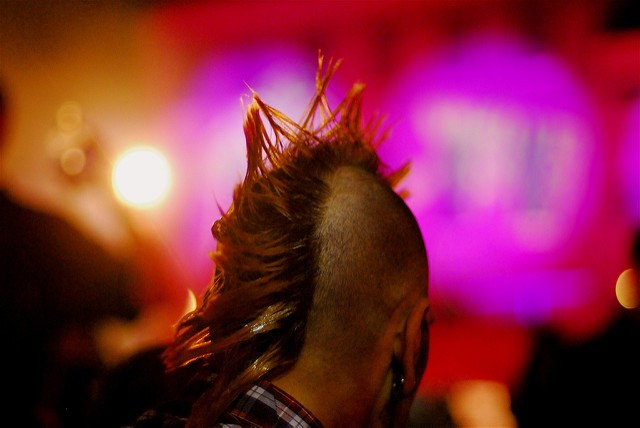 You were young and angry - quickly got that bar fight backbone beat into you way before the whiskey took hold. The years compounded and brought with them complimentary blue hair, a septum ring and assault charges. You made mountains of mosh pits and found sanctuary in the dingiest, darkest, loudest places.

But you grew up, kid. Before you knew it your crusty underground Neverland was a kitschy version of corporate America and Wendy was working a 9 to 5.

At what age does a counterculture troll begin reluctantly trudging back up the mainstream? When do societal norms and conformity regain control? The new releases from Blink-182 and The Julie Ruin have got me thinking… how old is too old for punk, exactly?

Maybe it’s the nostalgia talking, but it’s my firmly held belief that the best adults are those of us who grew up listening to Propagandhi and The Stooges. Punk kids who professed anarchy as a rite of passage and bemoaned consumerism became existential crisis-filled young adults. In turn, those young adults were forced to critically analyze and respond to their tedious realities well into their later years, and listen to Black Flag while doing it. That context is a hard one to shake.

The O.G. ‘punk kids’ - the antiestablishment revolutionaries - are now in their 30s and 40s. They are managing Targets, working in real estate, bartending, making music, writing manuscripts in hopes of getting published. Many outsiders who once felt at home inside chaotic spaces are now trying to function at least somewhat normally in the general public.

There is a particular sense of unity born only of underground spaces such as the punk sphere, though. These spaces encourage defiance and question firmly held conventions. They breed difficult, imaginative people. No matter how Stepford normal a former punk becomes, those brass knuckles are still beating inside.

The Wisdom of Patti Smith:

Much like the hippies and the beat poets before them, punks were the self-inflicted “others.” Punk music, the disenfranchised step child of rock, wasn’t particularly good or complex, but there was an added sense of untamed danger to the aggressive riffs and politically fueled lyrics. It wasn’t glitz and glam. It was Crown Vics and afterparties. Lighter fluid and Christmas lights.

For the sake of sanity and pretentious purists, disclaimer: I am a bit too young to have seen punk in its true heyday. Missed that boat by about 10 years. I did, however, jam Dead Kennedys and The Pogues, wore Doc Martins and wrote angry poetry of the disillusioned variety, but a think piece is a think piece - I have an appreciation, dammit. I caught the pop-punk wave of “Dammit,” and rode that bad boy until 2010. Judge me if you will, but I love me some Travis Barker to this day.

So much angst, so little time.

Equal parts spectacle and substance, punk does not dissipate with time. You do not merely lose the tendency to question, rebel and philosophize once removed from the subculture. Your tattoos fade and you try and find some productive way to scream about it, but punk never leaves you.