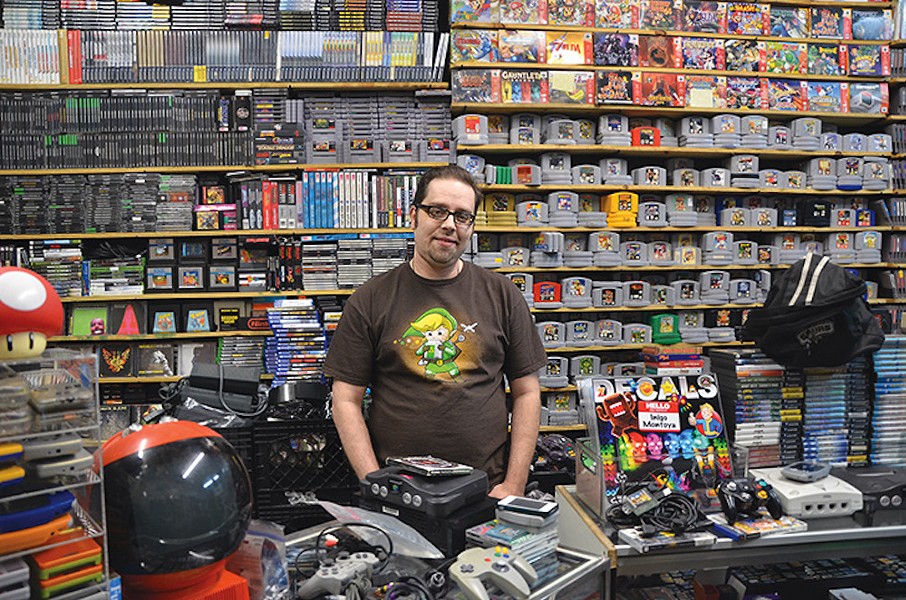 Byran Rindfuss Owner A.J. Martinez and one wall of his collection.

Starting a business is always a risky venture. Most companies don't clear a profit for at least a couple years. Obscure business plans, like, say a toe-ring store or a retro video game shop, particularly during the Great Recession, have an even smaller chance of survival. So, what would bring a person to want to invest everything that they have into such a perilous attempt at not only making a living, but thriving? Propaganda Palace, the retro gaming and vinyl store at 2100 McCullough Ave. is one such anomaly; a seemingly thriving business that sells obscure wares to a fraction of the population.

I recently talked with owner A.J. Martinez among the walls of rare Nintendo cartridges, controllers for every system in every modification and rows of thousands of vintage vinyl to try to get a sense of not only how someone begins to build such a rare yet successful business, but why?

Where do you get your fascination and desire for retro video gaming?

A couple of years go by. It's 1975, my father ... started working for this unknown company called Atari and [he] would walk around San Antonio with a Pong machine in a duffel bag, and his job was to convince the TV store owners in town that they should carry Pong. I grew up in his house surrounded by all the catalogs and the brochures and all this really cool electronic stuff as well as the video game stuff and I fell in love with electronics and music and movies and pop culture and video games because of the upbringing that I had.

How could you afford all of the costly equipment?

Both my grandfathers were pediatricians and so both sides of my family were relatively well-off and as a kid, I literally owned every video game machine you could think of. If grandma number one wouldn't buy it, grandma number two would. If grandma number two said no, then there was always mom. But one way or another I was spoiled and I had them all and I was really lucky because a lot of people would probably like to have had that experience.

When did you begin your impressive collection?

For 27 years I've been just amassing this stuff. Some people would say it's hoarding, but my understanding is that hoarding is something that no one else gets, a lot of people get this now, they didn't at the time. I remember the jocks in high school wanted to beat my ass because, 'What a geek, he plays ol' games, let's beat him up.' But now they're like my best customers, by the way. True story.

When and how did you decide to turn a serious collection into a retailer?

The business became a business ... in 2008, just as the economy was falling apart, housing bubble, financial meltdown ... I suddenly found myself unemployed ... nobody was hiring and I didn't know what I was gonna do. A couple of months go by and my wife comes up to me and she says, 'Other men in your position, this is when they'd sell that Harley in the garage or their golden coin collection or whatever. You don't have any of that but you have the biggest video game collection I've ever seen and maybe you can sell the extra 49 [copies of] Zelda. What do you think?' And I'm like, 'Nah. That's a horrible idea.'

I assume she won that argument?

The other 48 got listed on eBay and Amazon and that was the start of the business. It never was meant to be a business but it kind of eventually became one, and I always tell people, and this is true, I feel like I'm the luckiest bas ... guy in the world ... Everything just lined up perfect and when the economy finally tanked this business saved me.

So your inventory is all equipment that you already owned?

For a long time. Now, there are some newer items that come in because people will come in here and they want to sell or trade. But, I don't go looking for it like I used to. People actually come to us now. I had a lot to start with, that kind of gave us the initial inventory we needed in order to take off like we have. The other [stores] don't touch us because they don't have a 27-year reserve.

Like a fine video game wine. Where did you keep all of the items when you didn't have a shop?

This used to be in my house ... I have the most patient wife in the world. She was patient enough to let me keep it and now, of course, it was a blessing.

To what do you guys attribute your survival in this economy with all the major corporate competition?

We have the best selection, we're more knowledgeable than they are, I have all that experience. Anybody that gets paid by a corporate place, they end up having to really love games to even know half of what I know. Me, I love it, but I grew up around it, so it's easy as pie. It's like growing up around a bunch of muscleheads, right? I mean, you're just gonna be this huge ripped kid ... But, just look around, dude.

A lot of people have a vision of a typical gamer. What's your typical customer?

My average customer is a normally 20 to about a 40-year old guy. Not that women don't game, but it's more about dudes, right?

Right. The 40-year-olds are looking to regain and recapture their youth, same thing with the 30-year-olds. The 20-year-olds, in some instances, grew up with the newest equipment, but they're bored by it and they go back to the retro because that's the roots of all the awesome stuff that they love. But, we've got clients from five years old all the way up to 45 in here.

What items, specifically, are they looking for?

It's all over the map. The Nintendo stuff is very popular, but there are certain machines by Sega, or by Sony, or maybe even Atari that are pretty popular. I would say though that Nintendo is definitely the king of the roost ... And the other thing is, I don't know if you're gonna understand this, but I have this philosophy that something from 20 years ago comes back. It's a cyclical thing.

Never heard of it. Mind blown.

Right. Like Full House, grunge and the high-top fade.

The same thing will happen with video ... VHS and Beta and laser disc, the older dead formats, they're gonna come back. When they do it won't be because the audio quality is better or the video quality is better, it will be because of the added campiness, the extra "shitty" that you get from the VHS tape version of your favorite movie. You already own every Godzilla movie, but you don't have it on VHS. You can get the Blu-Ray for less secondhand but it doesn't have the nostalgia dripping off of it like that tape does. When you put that tape in and you hear that NNEEEaaarrrkkk and you see the blue screen and it says "Play" in digital shitty letters and it finally starts and you get the squiggle in the corner from the auto-tracking and the occasional hiccup as you're watching it. It makes a shitty B-horror movie ... better.

Shit equals good, got it. Let's get even more philosophical. What do you attribute that to in the human mind? What makes us pine for that experience?

We love things from the past that remind us of our youth. When you show a 90-year-old man his favorite toy from when he was 10, he cries a little bit. There's a wonderful feeling that overtakes you when you feel that, and it's nostalgia. And that's really what this store is. I know a lot of people think we're a video game or a music store, we're really a nostalgia store. Everything here is designed to take you back to another time.