Photos by Mark Reagan Once the process is complete, water cascades into the confluence of the San Antonio and Medina rivers.

In the 1990s, San Antonio was experiencing an explosion of growth.

And its reliance on the Edwards Aquifer — then, the city's only source of water — was threatened by a series of lawsuits alleging the Alamo City was violating the Endangered Species Act.

Turns out a four-inch Texas blind salamander that is only known to live in the limestone caverns of the Edwards Aquifer near San Marcos was endangered. And the fountain darter, a small fish that lives in the headwaters of the San Marcos River; another fish called the San Marcos gambusia, which is likely extinct; Texas wild rice, also found in and around San Marcos; two beetles that are found in the Comal Springs; and the tiny Peck's cave amphipod were also endangered; all living in critical environments in the Edwards Aquifer System, according to edwardsaquifer.net.

At the time, San Antonio's lust for water to sustain its growth threatened these species. Then the lawsuits started.

"You know, San Antonio really got, when all the endangered species things came to a head in the '90s, San Antonio sort of got dragged into it kicking and screaming," said Gregg Eckhardt, San Antonio Water System (SAWS) senior analyst of production and treatment operations.

Eckhardt, who has compiled a massive information dump of all-things aquifer at edwardsaquifer.net, is standing over a man-made waterfall that is cascading from the Dos Rios Water Recycling Center into the confluence of the San Antonio and Medina rivers in the farthest reaches of southern Bexar County. 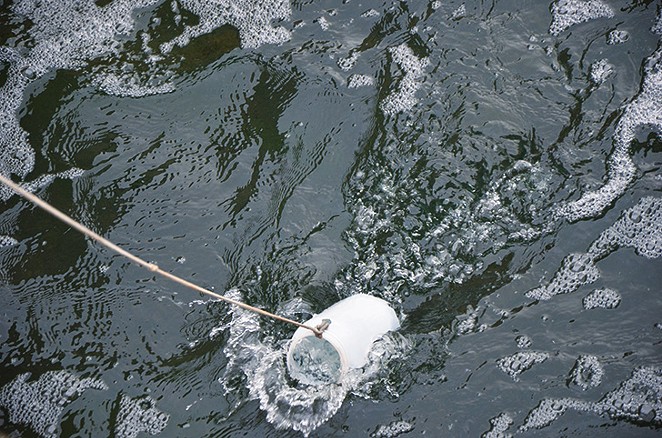 "That was what precipitated everything that we do," he said. "Everything that SAWS does, you can tie back on some level to endangered species, whether it's recycled water, or conservation, or any of the new water sources, they are all about maintaining [and] reducing our Edwards use to maintain spring flows for our endangered species."

In addition to the Edwards Aquifer, SAWS has acquired seven other water sources over the past two decades. There are two more on the way, including a brackish groundwater desalination plant near Elmendorf that is scheduled to be operational in October, and the controversial Vista Ridge Pipeline — the newest addition to SAWS' water portfolio.

And just like the '90s, not much has changed as far as exploding populations. The city is growing and planners estimate that San Antonio will double in size with a million new residents by 2040.

The Dos Rios Water Recycling Center was the first foray into SAWS' water source diversification efforts and today, people travel from all over the world to visit it. While the plant was completed in 1987, its importance rose with the fallout from the Endangered Species Act conflict.

"We literally get visitors here from all over the world," said Eckhardt, who rattles off examples: "South Korea, Japan, Mongolia."

And the Dos Rios Water Recycling Center lives up to its name. Nearly every aspect of the facility is sustainable or recyclable, even when it doesn't have to do with water. For instance, a CPS Energy contractor leases land for what was once the largest solar farm in the state. Black solar panels dot the landscape. Instead of using pesticides, SAWS employees built more than 500 purple martin houses that are hot real estate for the birds who feed on the massive amount of flies that congregate during summer. Those flies are there because SAWS is selling the leftover sludge and sediment from recycled wastewater to a contractor that turns it into compost. And then there's the methane gas.

"We used to burn it off and sit there looking at those flares at midnight even, thinking, 'Man, there's got to be something we can do,' but the technology wasn't there, the markets weren't there, and, so, time went by, and things changed, and we thought, 'Well, let's take another look at it,'" Eckhardt explained.

By 2011, they had figured out how to capitalize on a trend of on-site power generation across the country by using methane gas.

"But, that's kind of like, well, it's exactly like having a jet engine in your plant, underneath a shed," Eckhardt said. "And we were like, man, we're sewer guys. We don't know anything about running a jet engine."

So they decided to sell it on the open market. Now, consumers in Santa Barbara, California, use natural gas created by the waste of San Antonio's taco eating, Big Red guzzling populace. Each year, SAWS earns $250,000 from selling the substance.

And, then, of course, there's the recycled water.

In roughly 24 hours, once arriving at the facility, all the wastewater San Antonians flush down toilets is cleaned or reused by the Dos Rios Water Recycling Center.

"We take out the big stuff, the sticks and the rags and the shopping carts and Volkswagens," Eckhardt said with a smile. "Not long ago a 24-inch circular saw blade washed up."

After the water runs through a day-long series of filters, clarifiers, biological processes and more filters and clarifiers, it's ready for its next destination.

"We're taking some of this water from the plant ... [and] are pumping the water back into the city and, also, supplying the River Walk," he said. "We release this water in Brackenridge Park and then it flows down the San Antonio River ... so on a dry day ... all of the water from the River Walk comes from here. And most people don't know, when they are having dinner at Casa Rio, that most of that water was flushed two days ago."

CPS also gets a good chunk of that water to cool its power plants, and it's also used for a variety of industrial and commercial uses, including irrigation. And, like many of SAWS' projects, the Dos Rios Water Recycling Center will be able to increase its capacity as San Antonio's population continues to grow. But, in this case, it was sort of a happy accident.

"That's because when the plant was built, there were lots of stockyards. So it was built in a two-stage mode," Eckhardt said. "However, by the time the plant was completed, the stockyards had gone away. So that capacity can be used for San Antonio to grow into it."

Set in a wide swath of more than 3,000 acres that's dotted with cattle, the Twin Oaks Aquifer & Recovery Center can provide San Antonio with up to 30 million gallons of water a day — when it's operational.

"Without this plan, we would have never made it through this four-year drought we made it through," said Roberto Macias, manager of the Twin Oaks facility. "That was a rough drought."

That's because aquifer recovery and storage works like a savings account by making sure SAWS pumps out all the excess water from the Edwards Aquifer, as allowable by law. The allotment is a "use it or lose it" deal, and the extra H20 is stored in the sandy Carrizo Aquifer, which can be saturated with extra water.

"But instead of saving money, we're saving something more valuable, which is water," Macias said. "And we probably won't run until May. That's what I heard."

"We're almost at 100,000 acre feet. We're getting pretty close. That's the most we've ever had. Even when the plant opened in 2004, it was very wet those first few years. So we just stored like crazy," Macias said. "And then the drought hit and we started running like crazy, every year. For five years we were just saving, saving, saving. The plant hardly ever ran."

While the idea of pumping excess water from the Edwards Aquifer into the Carrizo Aquifer seems straightforward, it's not. Mixing water sources can be a disaster.

"Nothing good ever happens when two different waters meet, you know, unfortunately, because San Antonio's water is hard (Edwards) and this water here, it's soft (Carrizo)," Macias said.

"Before [Flint mixed water sources] there was no problem because they had a scale build-up and it kept all the scale and the lead and all that in the pipe. But as soon as they brought in that different water, it released everything, and then there was a nightmare," Macias said. "So that's why we do not ever want to bring in a different type of water. You don't have to make it exactly like Edwards, but at least compatible."

SAWS does this by adding lime and carbon dioxide to make it compatible with hard Edwards water, and the utility removes trace amounts of iron and manganese through aeration via a stadium-stand-like, stair-stepped structure that the water cascades down, removing these minerals.

If the iron and manganese were in the water, everybody's T-shirts would be red or pink or black, he explains.

SAWS' latest facility to look deep underground for water conservation purposes is also on this property.

However, SAWS produces an average of 210 million gallons a day, so it's just another drop in the bucket. But that's the point. With city and business leaders touting an estimate of more than a million people moving to San Antonio by 2040, every drop counts.

"We're just ... a small piece of the puzzle," Macias said of the Twin Oaks Aquifer Storage & Recovery plant. "The Edwards is still the major source of water, but 20, 30 years ago, it was the only source of water.

"We didn't have any other choices. But little by little, we've been weaning ourselves from having to rely on the Edwards. So there's a lot of little pieces in the puzzle."

And San Antonians should thank the Texas blind salamander and co. for that, because without those critters, the Alamo City might have drained the aquifer, sending the city into a waterless spiral of problems.

Instead, SAWS is now a world leader in water conservation.