How San Antonio’s Taquerias Are Hurting During Coronavirus Outbreak 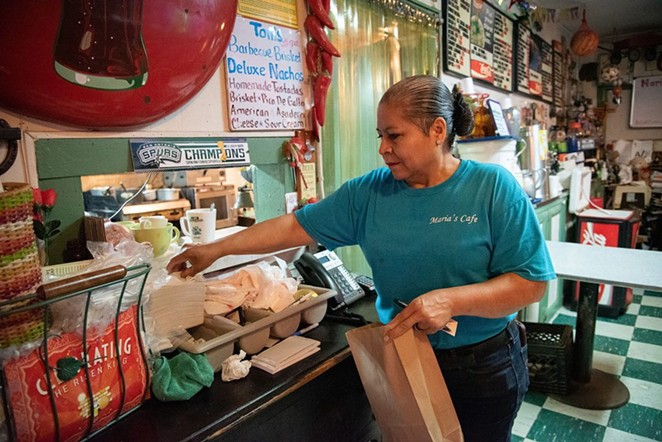 Since Wednesday, March 25, when local officials ordered San Antonians to stay home during the coronavirus outbreak, sales at Maria’s Cafe on Nogalitos Street have plummeted.

“Everybody was scared to come out, I guess, I don’t know,” she said.

Like many taquerias, this character-rich hole-in-the-wall just south of downtown, near Burbank High School, has built a neighborhood following in 33 years of business. Maria’s Cafe has distinguished itself with its eclectic taco combinations such as the Taco Loco #2, an assemblage of wieners, papas, beans, cheese and pico. Usually, Beza is slammed in the mornings as her little place of five or six tables stays packed while continuously cranking out take-out orders.

In this time of coronavirus, however, many daily rituals have been suspended, especially the one here in San Antonio of sitting down at your favorite Tex-Mex restaurant for breakfast.

Thursday morning, we took a quick tour of some taco joints closer to downtown to gauge the impact Mayor Ron Nirenberg and Judge Nelson Wolff’s “stay home, work safe” executive order has had on the culinary backbone of this city, especially because many taquerias tend to be mom-and-pop in nature. The entire restaurant industry first took a blow last week when Nirenberg and Wolff ordered restaurant dining rooms closed.

As we all know, in San Antonio, breakfast taco places and the Spurs are the two religions apart from actual religions. Many have had to scale back their hours of operations and cut staff. When asked what their prospect of survival is amid the coronavirus, all of the people we interviewed said they weren’t looking that far ahead. They’re taking it day by day.

Beza has cut her staff of six down to two—she and cook Monica Salinas. Earlier in the week, she fulfilled 22 plates to go, but that’s been the one highlight. Sales have dropped 80% this week, she said.

“I have no idea,” Beza said. “We’re just going to go with the flow. That’s all we can do. If it’s too slow, we come and try to sell. If there are no people, we have to go home. I’m not making money.”

“Yesterday it was totally down hill,” said Janie Wheeler, who’s worked as a waitress at Cafe Atotonilco for 16 years. “I guess it was the first day the mayor implemented that stay-at-home (order). I think everybody was afraid and nobody was coming out.”

Wheeler expects business will pick up as San Antonians acclimate to the new normal. She believes people are afraid to leave their homes because of misinformation going around, such as that the police will pull you over for driving during the partial shutdown, which is not true.

A skeleton crew now operates Cafe Atotonilco, which usually requires three waitresses to work the busy morning and evening shifts. Now there’s one waitress per shift. Wheeler has spent much of her time outside the restaurant, encouraging people to come in and take some tacos to go. She’s even called some regulars, asking if she could deliver an order—which she’s done.

Cafe Atotonilco opened in 1997 on West Martin Street and 10 years ago moved to its current location, which is a 10-minute walk from Our Lady of the Lake University (OLLU).

“They thought they were going to take a hit when they moved it, but they didn’t,” Wheeler said of owner Mike Hernandez. “All the customers followed us over here. But then with this, not even our loyal customers have come.”

‘It hasn’t been terrible’

Rocio Valdez, co-owner of Mama’s Kitchen on Hildebrand Avenue, describes business as steady, but on the slower side.

During our 15 minutes at Mama’s Kitchen, the phone rang 3-4 times and two regulars entered to pick up their tacos.

One of the regulars was Tom Keene, 85, a retired religious studies professor at OLLU. Every day, Keene drops in to pick up his go-to taco order: spinach with egg a la Mexicana, and chilaquiles with extra cheese.

“Usually it’s take-out, but having huevos rancheros here with my wife is always good,” Keene said. Keene made the point that the pandemic is hurting one way San Antonio builds community.

“The thing is … that’s the neighborhood,” he said of taquerias. “That’s where community develops. It’s not like Taco Cabana.” 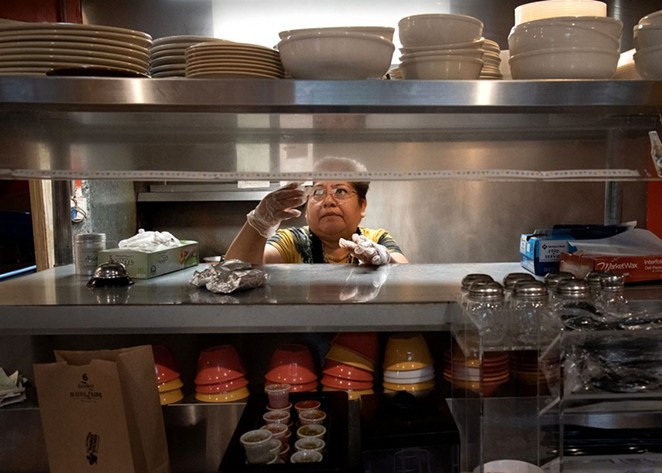 Among Mama’s Kitchen’s loyal fanbase are Trinity University students, which arrived in larger-than-normal droves once the university closed a few weeks ago. Now, many of the students have returned to their hometowns, and it’s just San Antonio regulars now.

Valdez said she hasn’t had to furlough any employees. The few they had to begin with requested time off and will have jobs when the coronavirus curve is flattened.

“It was mainly them reaching out to us and asking us, ‘Hey, we don’t have anybody to take care of our children,” Valdez said. “And obviously we’re not going to be heartless, ‘No you have to be here.’ Our top priority is for everyone to be safe.”

She said later, “Of course, we’re worried. Everybody is. … We are aware, we’re worried, but we’re trying to be in a calm state of mind … I’m not saying it will be over soon (but) once it just kind of mellows down, we will get back to where we were.”

‘Navigating without a map’

Had Hugo Garcia and Amanda Fagan known restaurants would be partially closed because of a pandemic, they wouldn’t have opened Con Huevos restaurant a few months before.

“This is like the worst timing to start up a small business and being completely new to it,” said Fagan, 26, who was taking orders from a window on the side of the small building on East Houston Street.

Fagan said sales at Con Huevos, which opened in November on the near East Side, have slowed by half, at least.

But she says for such a small establishment, the restaurant can withstand the pandemic, because with a crew of three, they were a small operation to begin with. No one’s been let go.

Garcia, 33, the head chef, has had to adjust the menu. For example, carne guisada beef has been difficult to come by, so no more carne guisada tacos for the time being. Ordering ingredients has been a challenge because they don’t know how much to order.

Still, they feel they’ll survive because of their tight-knit operation. Fagan said they really don’t want to apply for a small business loan, even if they’re interest free.

“That sounds like more trouble in the future,” Fagan said. “I would prefer a grant, or for it to be waived.

“We’re all just kind of navigating without a map right now.”