How Social Media Is Reacting To Ahmed Mohamed's Arrest 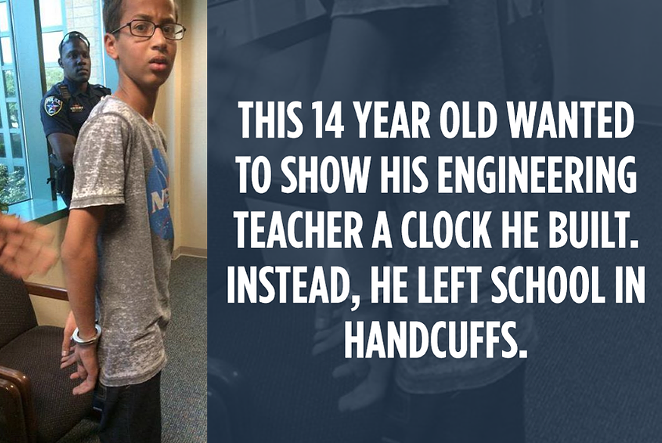 On Monday morning, police in Irving, Texas, arrested 14-year-old Ahmed Mohamed for building a hoax bomb, despite the fact Mohamed told them repeatedly that it was nothing more than a clock that he built to show his engineering teacher. Instead of being praised, he was warned not to show it to anyone else. A few hours later he was called to the principal's office and interrogated by the police. They asked him if he tried to make a bomb, not believing him when he said it was just a clock. He was then arrested and taken to juvenile detention. You can read our original report here.

When the story broke, people took to social media to accuse the school and Irving police of hypocrisy and racial profiling. Not only was Mohamed praised, he was even offered a few jobs. Here are some of the reactions:

I don't know how to build a clock. We need kids like Ahmed around to build clocks for us. #IStandWithAhmed

That moment when school can't tell the diff b/w a clock & a bomb but since the kid is brown, they arrest him just in case #IStandWithAhmed

Ahmed, I'd be happy to show you how we drive the Opportunity rover. Come visit us at JPL any time. #IStandWithAhmed https://t.co/VtesUugxj3

When a kid who loves robotics builds a clock & wants to show his classmates, we should celebrate him. Not arrest him. #IStandWithAhmed

#IStandWithAhmed because I'm a physicist at MIT, and he's the kind of student we dream of having!

Welcome to Irving, the 4th most boring city in the U.S. where you get arrested for creativity #IStandWithAhmed

society is teaching a young mind that no matter what he goes to accomplish, people will only see the color of his skin #IStandWithAhmed

But was Ahmed building a BLACK clock? #IStandWithAhmed

He was publicly accused and harassed, so he deserves public apologies from teachers, the district, and the police. #IStandWithAhmed

when I was in high school a white kid made a rocket and TOLD PEOPLE it was a bomb and still wasn't arrested. #IStandWithAhmed