How warships and the floating world led us to Art Nouveau 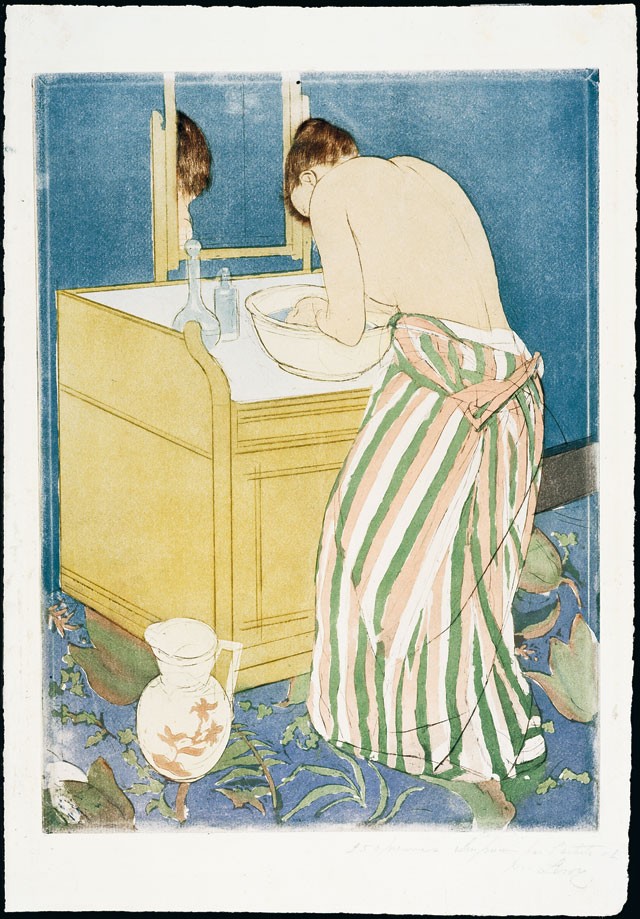 While politicians and pundits continue to rail about the need to secure our border to the south, offering helpful suggestions like an alligator-infested moat paired with a big, big fence, perhaps we should all just stop for a moment and remember that other gate we left wide open. Correction, that border forced open in 1854 when Commodore Perry sailed his squadron of American warships into Japanese waters and foisted a trade agreement upon the reclusive nation. Except for a small island open to Dutch traders once a year, Japan’s shores had been shut to the West since the early 17th century. What happened after Japan’s self-imposed isolation ended is on view at the McNay in “The Orient Expressed: Japan’s Influence on Western Art, 1854 – 1918.”

The exhibition, organized by the Mississippi Museum of Art, tells the story of Japanisme, the fascination with all things Japanese, that took place in France, Great Britain, and the United States when trade goods started flowing out of the far-off island. Textiles, bronzes, and ceramics arrived, along with fans and kimonos. Artworks came too, such as screens and scrolls, and woodcut prints known as Ukiyo-e (literally, “pictures of the floating world”) that became especially prized by collectors. After incessant revivals of imperial styles in Europe (and in slightly retooled fashion, in the U.S., too), the new designs from the East inspired waves of creative innovation in Western workshops and ateliers.

Goods from India and China had trickled west on a system of trade routes known as the Silk Road for centuries, and the Japanese pieces were readily mixed in as the latest addition to Orientalism. But this time something new happened. A fascination with nature and nature’s organic patterns started as European artists began to appropriate Japanese design elements into their own work, adding carp, herons, and butterflies to fashionable ceramic and silver table settings, while painters depicted Japanese scenes taken from Ukiyo-e prints and the photographs made by tourists, the first European and American travelers to Japan. Sometimes the Japanese elements were translated into Western stylings, but as Japanese art was copied verbatim, especially from the prints, a new vocabulary of gesture and composition entered the language of Western visual art, along with insights into a different way of being. While seeking to gain luxuries from the East, America and Europe were transformed forever.

A suite of 10 aquatints by Mary Cassatt in the exhibition reveals an artist entering the floating world to make it her own. The pictures depict a woman alone at her toilette, and with a child, and in public scenes, such as sitting on a train with a friend. The muted palette is reminiscent of Ukiyo-e prints, but it is the way space is portrayed that arrests the eye. Asymmetry, and the use of diagonals, dominate the scene in the lead image, Woman Bathing. She is seen reflected in a mirror, though her face is hidden from the viewer. A robe dangles from her waist, but the tell-tale folds that reveal the modeling of form — long a hallmark of Western painting and sculpture — are missing. Instead, the garment’s stripes take on a flat, graphic aspect, an effect that is also seen in the floral design of the carpet. Perspective is confusing, too. Adding to the dreamlike aura of the scene, the baseboard lining the bottom of the wall on the right of the picture is inexplicably missing on the picture’s left side. The work combines many Japanese tropes that push the picture towards abstraction, and an accompanying catalogue to the exhibition explains that Cassatt was indeed influenced by Sukenobu (whose prints were owned by her friend Edgar Degas, who was also affected by them) and Kitagawa Utamaro, known as the leader of the Ukiyo-e school.

The exhibition shows works by many male artists such as Americans James McNeil Whistler, William Merritt Chase, and Childe Hassam, Charles William Bartlett of England, and Henri de Toulouse-Lautrec of France, but the presence of women is everywhere — as artists, like Cassatt — and as the subjects of paintings, too. Often, they are depicted dressed in kimonos, or with Japanese objects. It was women decorating their homes who created the desire for Japanese goods, and the fad of fashion known as Japanisme. That Japanese art, and the vision behind it, morphed into the tendrils of Art Nouveau, and made the insurrection of Modernism possible in Europe, is a wonderful added benefit to what was seen by Commodore Perry as a firm showing of American military resolve. •