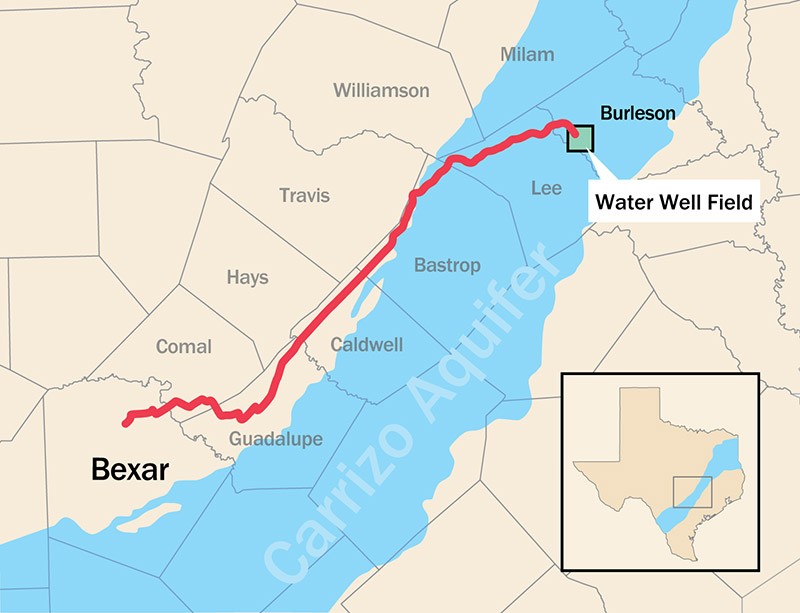 Time sure does fly. Pretty soon 2020 will roll around. And by the time another five years passes by, expect your water bill to cost $32.50 more a month than it does today.

You can thank San Antonio City Council for the rate increase.

City Council was required to approve the deal between SAWS and the Vista Ridge Consortium because it results in a rate increase. So you're paying for this, not SAWS or the council.

Ben Gorzell, San Antonio's Chief Financial Officer, told the council October 30 that an Alamo City resident's average water bill is $55.72. Even without the Vista Ridge Pipeline, that expense was projected to rise to $76.12 in 2020 because of SAWS' planned 5 percent rate increase to fund sewer upgrades and water desalination. Tack on the Vista Ridge Pipeline and you get an estimated rate hike of as much as 19 percent, according to projections presented during the City Council meeting.

During the four-hour meeting, members of the Southwest Workers Union and the Esperanza Peace and Justice Center, who took the day off work to protest the deal, pleaded with council to delay the project and consider the hardship it would place on low-income and working-class residents.

While City Council District Five Councilwoman Shirley Gonzales voted for the deal, she interrogated SAWS President and CEO Robert Puente about how the water utility would work to ease that burden on the residents who are going to foot the bill for this project.

"There seems to be no end in sight for the (rate) increases and people's wages aren't increasing at the same rates that the fees are," Gonzales said.

Puente promised that SAWS will beef up its affordability programs, including the "lifeline rate," which is for low-income customers who use less than 2,244 gallons per month. Puente, however, didn't provide specifics—only a promise.

San Antonio is home to 461,966 households, according to Zipatlas, a website that compiles demographic information about populations in the United States from census data. And a little more than 21 percent of the Alamo City's population lives below the poverty level, which has eight categories that range from single-person to eight-person households. A household of four meets the definition if its annual income is $23,850, or $1,987.50 monthly.

The majority of renters in San Antonio pay between $500 and $749, per Zipatlas. Let's round up that monthly income to $2,000 and subtract a rent of $600 per month, leaving our family of four with $1,400. Assuming this family has car payments, deduct another $260 and they're left with $1,140 with plenty of bills still left to pay, including auto insurance. Those rates vary widely, but let's assume the car owner in this family of four has a clean driving record and only pays $100 a month, leaving $1,140 for the remaining household expenses.

Let's say this family does most of their cooking at home. Take $400, or $100 for each family member, and put that cash toward monthly groceries, making sure the kiddos have fresh veggies, protein and grains each day, along with three square meals. Now this household is down to $740.

The family is fed and it's time to factor in the gas it takes for each parent or guardian to get to work. We'll assume the children take the bus or walk to school so no gas money is being used there. This family budgets $200 a month for gas, about $50 a week. Now they're down to $540.

Let's also assume there are two heads of household, with two children, and the heads of household each have a cellphone, which costs them a total of $100 a month. Now the family has $440, before utilities are even paid.

According to a 2013 story in the San Antonio Business Journal, the average CPS energy bill ran a little more than $140 during the 2013-2014 winter months. That leaves our family budget at $300. And in 2020, if SAWS' rates increase to more than $88, now this family is left with just $222 in discretionary income for the month after water use and without any assistance from the utility.

So while San Antonio is forward-thinking when it comes to diversifying its water supply, it must take into account how the cost of these projects affect the most vulnerable in our society. City Council should have listened to the Southwest Workers Union and Esperanza representatives, who called for a delay to allow more planning and brainstorming to mitigate the burden.

Instead, council seemed to be persuaded by contractors and real-estate representatives who can now use the pipeline as a selling point to businesses and developers who have their eyes set on land north of Loop 1604.

But perhaps council will still have time to figure out a way to mitigate the rate increase on low-income families.

"The rate conversation isn't over," District 1 Councilman Diego Bernal said before the vote. "The council has a tremendous amount of control over who benefits from lifeline and over how that rate structure is put together ... It's fair to say that the folks who are most vulnerable are not the reason we need this water. They don't use a whole lot, and they won't in the future. So it's incumbent upon us to protect them."

Bernal added that rate increases are part of an increasingly expensive world and while they are a fact of life, "we don't have to accept as what they are presented here."