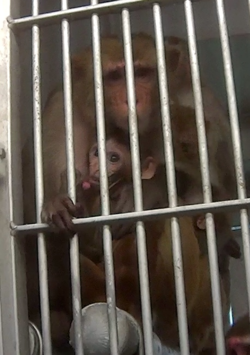 After several undercover investigations into animal research facilities, including Texas Biomedical Research Institute, and roadside zoos, the Humane Society of the United States submitted a legal petition to the U.S. Department of Agriculture calling for regulatory guidance.

"The USDA has a legal responsibility to provide oversight of care of primates — 30 years ago, Congress amended the Animal Welfare Act to specifically require that monkeys and apes, including chimpanzees, macaques, capuchins, and marmosets, be provided with enriched environments to promote the 'psychological wellbeing' of these highly intelligent creatures," Humane Society President Wayne Pacelle wrote in a blog.

The USDA has an open investigation into Texas Biomedical Research Institute.

Michael A. Budkie, executive director of the national animal rights watchdog group Stop Animal Exploitation NOW!, has said the investigation may relate to repeated complaints he's filed with the USDA over five primates that have died at the facility since January 2014.

USDA routine inspection reports verify these fatalities and also include other violations ranging from inadequate veterinary care to sanitation problems.

However, Texas Biomedical Research Institute is just one of numerous laboratories and roadside zoos in the United States that animal rights groups and the Humane Society have made Animal Welfare Act violation allegations against.

"Over 100,000 primates are kept in laboratories and exhibition facilities in the United States. But the USDA's regulations have long failed to prevent unnecessary suffering in captive primates and the agency's own inspectors called for guidance over 15 years ago, conceding that current regulations are too difficult to enforce," Pacelle wrote.