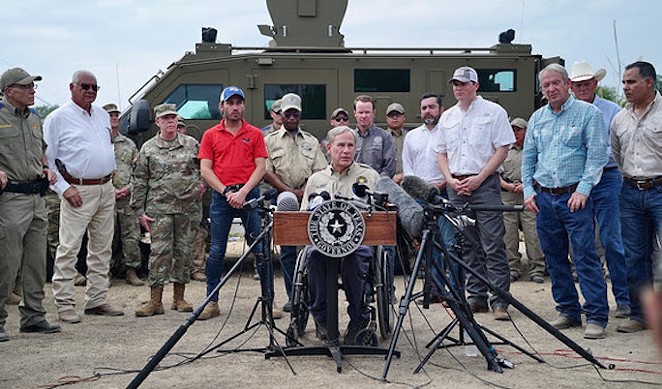 Hundreds of migrants jailed under Gov. Greg Abbott's policy of arresting border crossers for minor property crimes have lingered in prison for weeks without facing charges, according to a Texas Tribune investigation.

What's more, dozens of those arrested have been imprisoned for more than a month without being appointed legal representation, according to the report.

Under Texas law, defendants must be assigned an attorney within three days of requesting one. Defendants also should be released if prosecutors don't bring charges against them in an expedient manner, according to state law.

For trespassing — the charge on which most of the imprisoned migrants were picked up — the release deadline is set at 15 or 30 days, based on the severity of the charge, the Tribune reports.

“We can’t have a country or a system where people are being rounded up like this and sort of tucked away and hidden without the oversight and respective rights that the Constitution demands,” defense attorney Amrutha Jindal, who represents some 50 of the prisoners, told the Trib. “The system crumbles without due process.”

The border crossers are being held in a pair of prisons hundreds of miles from the areas where they were initially picked up, according to the Tribune probe. Many have spent weeks with little to no legal assistance and with limited understanding how long they'll be held. Most are men who don't speak English.


Abbott, a Republican, has seized on a get-tough approach to immigration as he runs for reelection in 2022. The governor launched his policy of jailing migrants in July, shortly after he trumpeted plans to resurrect former President Donald Trump's largely unfinished border wall.

Since Abbott announced his arrest plan, which yielded law-enforcement chaos in its early stages, some 1,000 migrants have been sent to two Texas prisons converted into immigrant holding facilities, the Tribune reports.