Hyperbubble’s silent, invisible movie coming to a radio near you 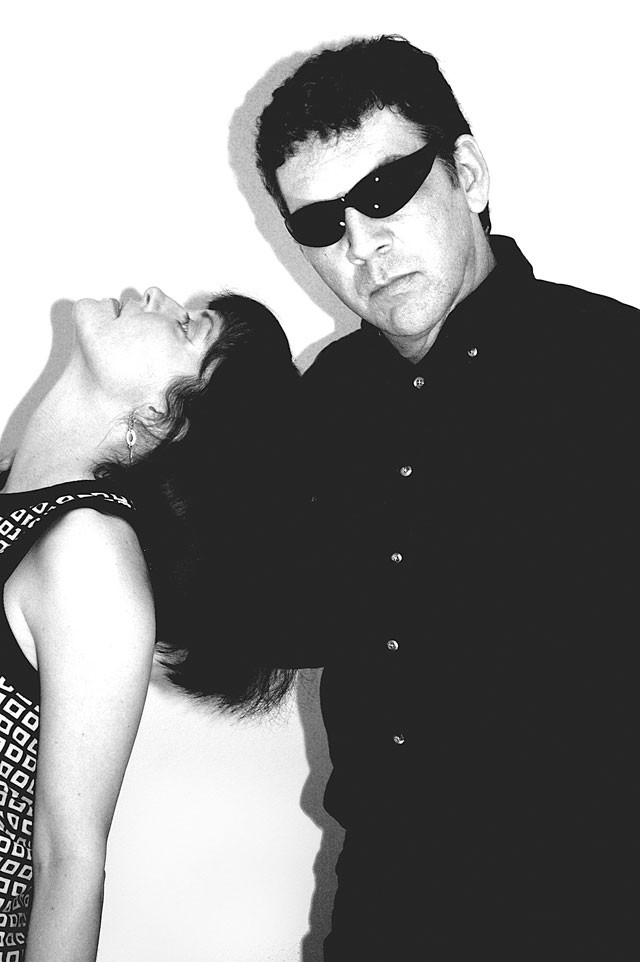 Why be a slave on the road when you can be Hyperbubble instead?

The electronic duo of Jeff and Jess DeCuir records when they want to, and don’t feel the pressure to support their albums with grueling tours. When they work, they do it on their own terms and at their own pace.

Both Jeff and Jess have art degrees from UTSA (Jess also teaches at the Southwest School of Art and Craft) and for years they have mixed their love of art, theater, and music. While she painted, taught art, and did informal open mics with friends, he was touring with Spleen and they were both part of Pink Filth (a bubblegum pop experimental band).

It was in 2003 that they decided to concentrate on Hyperbubble, and since then they have released four electro-pop albums: Solid Pop (2004), Airbrushed Alibis (2007), Candy Apple Daydreams (2010), and Drastic Cinematic (2011), the most recent of which will be presented live on KSYM on Saturday (see info box). The common thread linking the albums is careful production that pays as much attention to the music as it does the CD sleeve. But the latest album is a sonic detour that took them to the land of imaginary film — Drastic Cinematic is the music of a movie that doesn’t exist.

“That was very intentional,” said Jeff in their Northwest home studio. “The previous albums had a semi storyline to [them] and the songs were all sequenced in order to create a storyline. This time around we wanted to make this album more interactive and have the listeners use their own imagination and creativity to complete the picture as every track progresses.”

It is a film-noir/futuristic soundtrack, and the synthesizer is the perfect instrument for them, not only because of its musical possibilities. “We chose synthesizers because it was a punk instrument in the sense that it had a bad rap, it was the underdog instrument,” said Jeff. “People said, ‘That’s not real music.’ So we thought, ‘Well, that’s the instrument we want.’ We now got something to prove.”

Still, during the Pink Filth era, a precursor to Hyperbubble, some people didn’t believe them. Were they real musicians or artists performing as musicians?

“It became a great debate and we didn’t want to ever give that away,” said Jess. “In fact, a little bit of both was true. So by the time we did Hyperbubble it became this performance art concept. Yes, we are playing and we are a real band, but at the same time we are an art presentation, we are performers.’”

It won’t be easy to catch them live to see for yourself — despite a tour that took them through England, France, and Scotland, and a show in March at Luminaria, Hyperbubble rarely plays live in San Antonio.

“We don’t consider ourselves a local band in the sense that we are playing at some club every weekend, again and again,” said Jeff. “We want to make our gigs special events with concepts and themes, bringing special guests in. We like to play at an art or movie event that isn’t your typical band thing because we are trying to entertain ourselves as well. Playing at a club every weekend doesn’t amuse us.”

The radio gig sounds fine, but c’mon, guys … Why don’t you plan one little local show to celebrate this year’s release of Drastic Cinematic?

“We might do something, but the plan right now for this album in particular is that we want people to come up with their own images and pictures when they listen to it,” said Jeff. “If we stand in front of them dancing around and playing keyboards or whatever we do on the stage, that’s going to be the first impression of the songs. But if we do it on the radio they’ll have a thousand little impressions or experiences. Everyone will interpret the music differently, and I think it’s the best format.”

Whatever you imagine, don’t call them retro.

“When people get caught up in, ‘Oh, your music is so retro, it sounds like the ’80s,’ we want to say, ‘Wait a minute, in the ’80s when I was into synthesizers I thought they were futuristic and guitars were retro.’ No offense intended, but we like to think of our music as retro-meets-futuristic. It’s not all one thing.” •

Hyperbubble live on KSYM's The Casbah (hosted by Brian Parrish)