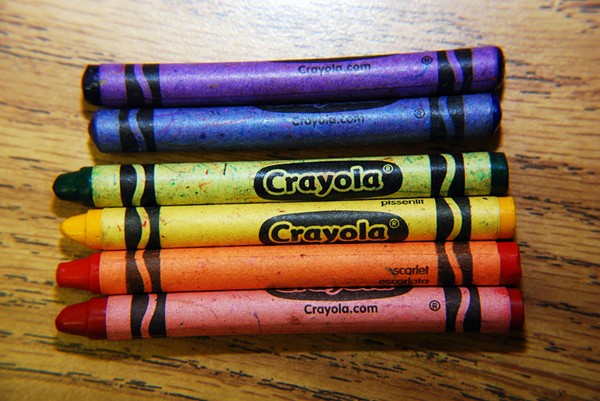 Kids armed with crayons have apparently become too destructive for federal immigration officials.

As a result, the feds have banned pro bono attorneys representing asylum-seeking women and children from bringing in crayons when they visit clients at a South Texas immigration lockup run by a for-profit prison company.

Staffers with RAICES, a San Antonio nonprofit that, among other things, helps represent asylum seeking families detained in the GEO Group’s Karnes County detention center, say that Immigration and Customs Enforcement officials told them last week crayons are now off limits inside the facility’s visitation rooms because of “crayons which RAICES staff/volunteers have given children which have caused property damage to the contractor.” In a letter to ICE officials this week, RAICES attorneys and other lawyers representing asylum seekers at the South Texas immigration lockup say the crayon ban hints at a larger problem.

“Even before the ban on crayons, we have faced and continue to face significant impediments to working with traumatized women and children in the visitation area,” they wrote in their letter to ICE deputy chief of staff John Amaya and San Antonio’s ICE field office director Daniel Bible. The crayon ban is just the latest example, they say.

As we’ve reported before, attorneys have been performing what basically amounts to legal triage at private prison-run immigrant detention centers in South Texas for two years as the federal government has ramped up efforts to detain and quickly deport the thousands of Central American mothers and children who have fled to the Texas-Mexico border to seek asylum. These attorneys help mothers and children navigate the convoluted legal pathway laid out for asylum seekers: First, they have to convince federal agents or border guards to send them to an asylum officer who then conducts what’s called a “credible fear interview”; then, if they can demonstrate a possible basis for asylum, they’re bounced to an immigration judge who holds a “merits hearing” to evaluate their claims, where they can present evidence to bolster their case for staying in the country.

It’s difficult, complicated work. And for a long time, the attorneys doing it have argued that ICE and the private prison companies they contract with haven’t made it easy. Lawyers who visit family immigration lockups in Karnes and in the middle-of-nowhere Texas town of Dilley say they’re essentially restricted to visitation and interview rooms when they see clients. Mothers, they say, often have no choice other than to bring their young children into the visitation rooms with them while they’re meeting with attorneys – which can make it difficult to suss out and document the stories of rape, violence, murder and gang retaliation that sent many of these families fleeing for the Unites States in the first place.

RAICES staffers say they've long used coloring materials as a healthy distraction for these kids while attorneys and parents iron out asylum claims in these visitation-room meetings. The kids have a small play area available to them – a nine-by-five-foot mat, basically – but attorneys say private prison staff are usually so mean to the children that many refuse to leave their mother's side. In their letter to ICE officials protesting the recent crayon ban, the attorneys say the children are often "reprimanded by GEO staff, sometimes harshly."

In a statement late Friday, ICE spokeswoman Nina Pruneda said that, "For the safety of the facility residents, donated items brought into the visitation area, including crayons, are prohibited." She says ICE now has plans for a chalk board wall in the visitation area. A GEO Group spokesman said that, basically, concerns from lawyers over the visitation room crayon-ban are overblown. There are still crayons inside other areas of the facility, according to GEO spokesman Mark White. "GEO firmly believes children are properly cared for and that they have adequate forms of entertainment at their disposal — we do everything in our power to ensure that families going through obviously difficult circumstances are properly cared for, advised/represented and feel safe and comfortable," White said in an emailed statement.

Still, RAICES staff say they've been bringing crayons into the visitation rooms for about two years and it's never been a problem until now. “ICE’s claim that children have destroyed contractor property is no excuse for the policy," the attorneys wrote in their letter to ICE officials this week. "Treating a child’s color markings as ‘destruction of property’ is altogether inappropriate. And such markings are a cost that comes with the detention of children. It is extremely disturbing that ICE’s concern for GEO’s property takes precedence over the well being of the children and their mothers’ rights to legal advice.”