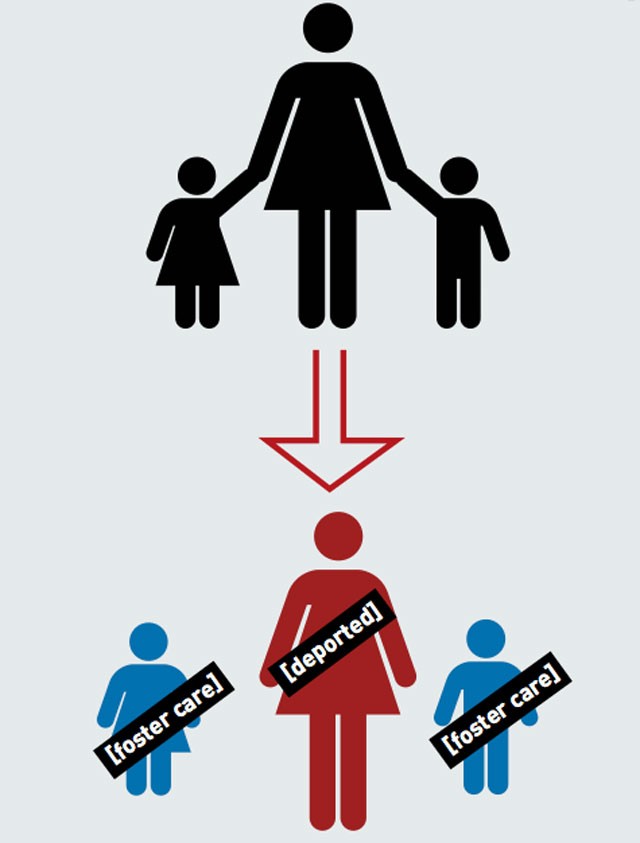 A sustained federal crackdown made 2011 a banner year for deportations. A record 397,000 undocumented immigrants were sent packing. And while the Obama administration cheers that more than half of those deported were convicted of crimes, advocates warn of a troubling by-product of rising immigration enforcement: children left behind as natural-born citizens absorbed by the foster-care system.

The New York-based advocacy group Applied Research Center estimates that some 5,100 U.S. citizen children sit in foster care across the country because of undocumented parents caught in an expanding web of immigration enforcement. Should enforcement march ahead at the same clip without rules to keep families intact, the number of children thrown into state custody could triple in coming years, the group warns. "As long as there's this commitment to deporting record numbers of people, there are going to be collateral effects, and this is one of the most disturbing ones we've found," said Seth Freed Wessler, chief researcher and author of ARC's new "Shattered Families" report.

The Texas borderlands see the highest concentrations of such kids stuck in foster limbo. A full 7.5 percent of children in foster care in El Paso have lost their parents to immigration enforcement, while in the Rio Grande Valley children of undocumented parents account for 7.8 percent of those in foster care. It is estimated that nearly one in four deported immigrants leave behind U.S. citizen children. The report notes at least 20 other states where families are more likely to be separated by ICE thanks to local immigration enforcement tools, like the fingerprint sharing network Secure Communities and 287(g) agreements that turn local cops into immigration officers.

While GOP hardliners have openly pushed to change the 14th Amendment, and the birthright citizenship it guarantees, ICE officials claim to be addressing the issue. This summer agency Director John Morton sent a memo agency-wide laying out over two dozen factors agents and lawyers should consider when looking at deportation, like whether the immigrant was brought into the country as a child or whether they have citizen children, angering immigration hawks and even sparking Texas GOP Congressman Lamar Smith's own crusade to end prosecutorial discretion (See "Lamar Smith's push to HALT the DREAM Act," August 17, 2011). DHS secretary Janet Napolitano announced this summer a systematic review of all 300,000 standing deportation cases, saying the department hoped to close those that don't meet the administration's priority of deporting criminal immigrants.

But that doesn't seem to be happening. While activists have managed to push ICE to drop cases against high-profile DREAM Act-ers, like San Antonio's own Benita Veliz, spared this month after a two-year battle with authorities, advocates charge that cases that fit the Obama administration's profile, like those with deep family ties in the U.S., continue to sail through. The American Immigration Lawyers Association last week made its own assessment, saying the new mandate is unevenly applied across the country, creating confusion within ICE and immigrant communities. In fact, the association says that not only have most ICE offices not implemented the new standards but that many are actively resisting them.

Consequently, not only are more undocumented parents with citizen children being deported, they actually represent a larger portion of the total deported, according to ARC's report. Data obtained by the group shows the Obama administration removed 46,000 parents of citizen children within the first six months of 2011. Between 1998 and 2007, the last time federal authorities released such data, the Department of Homeland Security deported 180,000 noncitizen parents, about 8 percent of all deportees during that time. Now, over 22 percent of deportees are immigrants with citizen children, Wessler with ARC says.

Many are children who may never reconnect with their parents, partly because child welfare agencies lack formal policies for dealing with such cases, but also because, as Wessler puts it, "these parents basically fall off the face of the earth" once they enter the shadowy world of immigrant detention.

ICE has historically refused to make accommodations for parents going through child welfare proceedings, and many of the those interviewed for Wessler's study were completely unaware of the process. Some weren't contacted by child welfare departments until after deportation, after the agency had already initiated the process to sever parental rights. "The child welfare system functions on a clock. And if a child's out of a parent's custody for enough time, then the clock changes. It changes over into the process of termination of parental rights," Wessler said.

Even more disturbing, many kids are quietly pushed to stay with strangers in foster care rather than family who may also be undocumented. Wessler referenced a home study report from a CPS worker in San Antonio that gave a glowing review of a child's grandparents, but still advocated against placing the child there because both were undocumented.

Federal law requires child welfare agencies to try to put children back with their parents precisely because longterm foster care can lead to a rash of other serious problems down the pike, from homelessness to increased involvement with the criminal justice system, to mental health issues, all highlighted by a 2007 MIT study examining the longterm impact of foster care.

Just last spring child advocacy groups filed a class-action suit against Texas, alleging numerous cases of abuse and neglect within the state's foster care system. And with an immigration policy intent on beefed-up enforcement, we're funneling even more kids inside. "They're now forced in a system which clearly has a whole set of detrimental effects on children in the long run," said Wessler. "Many of these kids should never have come to the attention of the system in the first place, and now they're stuck there." •