If you're going to smoke weed in a bong, might as well make it an interesting one 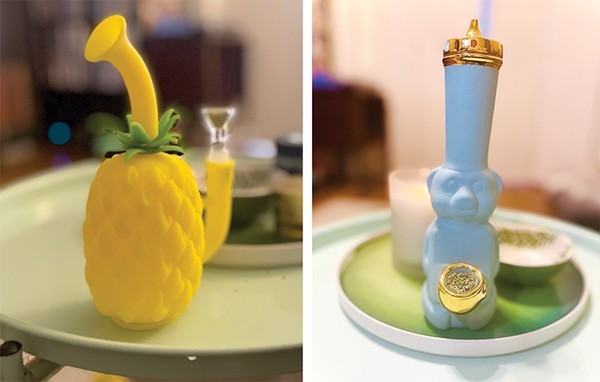 Marijuana is legal for limited medical use in Texas and entirely legal in many other states, meaning you can enjoy your high in a plethora of ways.

Of course, that's preferable to the days when you had to know a guy who knew a guy whose brother sold the cheapest and worst dirt weed that might even contain spider eggs (a true story). Today, you can enjoy your weed in beverages, chocolates, fruit gummies, candies and syrups — if you can name it, they have probably figured out a way to put pot in it.

But when it comes to smoking weed the old-fashioned way, discovering the right smoking accessories to invest in can become a journey. These days, there are an infinite number of devices to try, depending on how you want to enjoy that sticky goodness. Some gadgets are complicated rigs that promise to give you the cleanest puff of smoke on the market. (Well, the cleanest considering you're still inhaling smoke into your lungs.) Other implements are designed to be stupid as hell and might be crafted to look like Rick Sanchez from Rick & Morty.

For this review, I decided to focus on a couple of unusual bongs.

For those new to all this, a quick primer: To smoke from a bong, you put your mouth over the hole in the neck while lighting the weed you place in the small bowl at the bottom. Water contained inside cools the smoke, which makes for a smoother hit. You suck in the flame, igniting the weed and creating smoke that travels up the neck. After a second or two, you remove the bowl (or let your finger off the carb hole depending on the design), and the built-up smoke will travel up into your lungs.

I decided to track down the silliest pipe I could on short notice and came up with the Silicon Pineapple Bong by SoCal Arch, whose not-at-all-suspicious tagline is "Waterbeds 'n' Stuff" (waterbedsnstuff.com). I was able to purchase this for $25 in the St. Louis area at the Ascend Dispensary in Fairview Heights (letsascend.com/home). It's available in yellow, green and marble swirls. It's just a bit bigger than a mug of coffee. It is truly the silliest yet extremely functional bong I've ever owned.

The body of the Pineapple is made entirely of silicon, save for the bowl and a small magnetic part to hold the dab tool, which is basically a thin metal scooper. A secret compartment pops out of the bottom that doesn't appear to have a function other than maybe holding a small amount of your stash. It's effortless to fill with water, and I found it best to throw some ice cubes in there to make it feel like I was holding a tropical drink.

I enjoyed grasping this ridiculous thing in my hand when I lit it up. It looks so stupid in the best ways. (For maximum summer-party effect, throw on a crazy Hawaiian shirt and sunglasses and lay in a mini-pool in the sun!) Upon the first hit, I noticed that the bowl gets easily wedged in the base and is difficult to remove. However, with a simple design, I found it just as effective to smoke through it without removing the bowl for airflow.

If you're looking for a small party bong that won't break your weed budget, the Silicon Pineapple Bong is the one for you.

Recently, I found a more ornamental option from Portland, Oregon's Candy Relics (candyrelics.com), the Honey Bear Bubbler ($160). While not a bong in the traditional sense, the ceramic Honey Bear still has a long neck that usually appears on one. It also doesn't have a removable bowl stem you might be familiar with seeing. Instead, the bowl has a carb hole on the left side, much like the ones on standard glass pipes you might purchase at any head shop. It helps to improve airflow when you take a hit.

The main base is modeled after one of those plastic bears you buy honey in. This bubbler is adorable as all get out, and with its gold-colored topper, it makes for a discreet piece of art to put on your shelf for when your parents come over. But, of course, they'll never notice that it's a drug accessory (I mean, unless they look at it closely). The Honey Bear comes in eight colors, though currently, half of those choices are sold out. We were lucky enough to pick up the turquoise, which is beautiful even without a glaze on the ceramic.

It's also worth checking out some of Candy Relics' other pieces like the Soda Can Pipe, harking back to your teenage days when you had to make do with what you had, be that a soda can or an apple.

We absolutely adore the Honey Bear in our home, both as a conversation piece with hip guests and for its functional reasons. The bong hits smooth, and I found that clearing out the smoke that gets pulled up into the neck is much easier when using the carb hole than other bongs that require the bowl to be removed. The only downside comes from the hands of the user. Make sure to always keep the bong upright because it is far too easy to tip the water out of the hole or to thoroughly soak your weed. I have definitely never gotten too stoned and tipped it over multiple times.

If you're looking to invest a bit of money in a lovely bong that makes your weed habit look a bit classy yet playful, the Honey Bear is the sweetest choice you can make.

A version of this story first appeared in Riverfront Times, an affiliated publication.