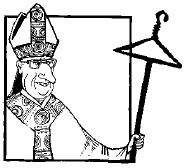 In the early 1970s, before Doonesbury became a household name, Garry Trudeau surveyed newspapers that ran his strip to map the range of issues that he could and could not get away with.

One newspaper editor who replied to Trudeau’s questionnaire offered the fledgling cartoonist some guidance: “It has nothing to do with subjects, it’s how you execute it.” That advice, Trudeau later told Newsweek, “opened up a world to me, and I felt if you bring a certain amount of taste and judgment there’s nothing that can’t be addressed in comic strips.”

Well, there is something: abortion. Since “Doonesbury” debuted in 1970, the only strips that United Press Syndicate has refused to distribute mocked the 1985 anti-abortion film The Silent Scream, which purports to document the pain suffered by an aborted fetus. The six rejected strips show scenes from Silent Scream II: The Prequel, briefly starring Timmy, a 12-minute-old embryo, and his mother, whom Trudeau’s filmmaker-narrator refers to as “the murderess herself.”

“We felt that any number of papers might have a problem with these particular strips on the comics page,” Lee Salem, editorial director of Universal Press Syndicate delicately put it to the Chicago Tribune.

Trudeau agreed to withdraw the Silent Scream send-up, which instead ran in the New Republic.

Editorial artists who dare to draw cartoons and comics espousing abortion rights can face difficulty getting published. The disturbing track record offers more evidence of a rightward lurch by the U.S. media. The shift became apparent after Republicans won Congress in 1994. The boot-licking increased when George W. Bush took office and it only intensified after the September 11 terrorist attacks. Whether recent Democratic victories significantly embolden the mainstream press remains to be seen.

M.G. Lord, formerly editorial cartoonist at Newsday, is not optimistic. She recalls that editors at the New York paper discouraged her from addressing religious issues, including abortion, which, she admits, is “so complicated that it does not lend itself to simple graphic messages.”

Yet her stark caricature of late New York cardinal John O’Connor — which Newsday killed in the 1980s — brilliantly captures the anti-abortion fervor of the prelate who consistently demonized pro-choice Catholics, especially Democratic politicians. Lord substituted a hanger for a cross atop O’Connor’s pastoral staff.

In recent years, support for legal abortion has waned, which Lord attributes to the growing power of Christian fundamentalists: “We, like the good citizens of Iran, live in what amounts to a theocracy.”

According to a 2006 Zogby poll, only 52 percent of Americans now favor abortion rights. “Maybe just seven or eight years ago, pro-choice forces were in the ascendancy and posted pro-choice numbers in the area of 65 to 68 percent,” observed pollster John Zogby in an interview with the Vermont Guardian.

The anti-abortion forces — rebranded as the sunnier sounding “pro-life” movement — deserve their due for relentless and effective proselytizing. But they have had help spreading the message. An analysis by the American Prospect found that from March 2004 to March 2006 the influential New York Times op-ed page went out of its way to give a platform to foes of legal
abortion.

“Not one op-ed discussing abortion on the op-ed page of the most powerful liberal paper in the nation was written by a reproductive-rights advocate, a pro-choice service-provider or a representative of a women’s group,” reported the Prospect. “Instead, the officially pro-choice New York Times has hosted a conversation about abortion on its op-ed page that consisted almost entirely of the views of pro-life or abortion-ambivalent men, male scholars of the right and men with strong, usually Catholic, religious affiliations. In fact, a stunning 83 percent of the pieces appearing on the page that discussed abortion were written by men.”

The fawning coverage received last year by Supreme Court Justice Samuel Alito — who hatched a detailed plan to gut Roe v. Wade while working for the Reagan administration — offers another example of the news media’s flagging support for reproductive rights. Following President Bush’s selection of Alito, 56 percent of the media coverage about his nomination was positive, reported the Center for Media and Public Affairs.

“The media falls all over themselves to appear balanced,” says Mikhaela Reid, a member of a small sorority of successful female cartoonists (only three women, Signe Wilkinson, Etta Hulme and Women’s eNews’ Ann Telnaes, are nationally syndicated; M.G. Lord left the industry to concentrate on her writing career.)

Last year, Reid, a self-syndicated cartoonist, created “Every Sperm Is Sacred,” a strip about the morning-after-pill. In Reid’s dystopian America of 2020, the Supreme Court has upheld a “Spermy Protection Act,” a show of power by the “sex-cell rights movement.”

Even one of Reid’s supposedly progressive clients, an alternative weekly newspaper in Rochester, New York, rejected it.

The idea for the strip was formed in Reid’s pro-choice knitting group, “which sounds hippie and granola but it’s not,” she says. “It’s a mini women’s think tank.”

“Every Sperm Is Sacred” reflects Reid’s anxiety about the crusade not only to overturn Roe v. Wade, but to limit the availability of contraception.

Reid says that the final panel of her strip, which depicted the forcible impregnation of women strapped to an assembly line, troubled her editors, who later told her “they felt the image of women basically being tied up and raped by the Sperminator machine was too reminiscent of a recent murder of a young woman in New York City, who went to a bar and was later found tied up and murdered.”

Reid, who found that excuse laughable, believes issues such as the threat to legal abortion in the United States and the right-wing’s war on contraception routinely get short shrift from male colleagues.

“It is dismissed as a soft issue or a woman’s issue,” she says. “‘Oh you women, drawing your cartoons about abortion’ . . . Often there is this perception that we’ve come so far women’s issues aren’t issues anymore.”

Featurewell’s founder David Wallis is the editor of Killed Cartoons: Casualties from the War on Free Expression (W.W. Norton), from which this article was adapted. Read Dave Maass’s review of Killed Cartoons, “Drawn blood,” March 6, 2007.