"Immersed" at the Linda Pace Foundation provides a glimpse of what we can expect to see inside the planned $16-million Ruby City designed by British architect David Adjaye, scheduled to open in 2018 to celebrate San Antonio's 300th birthday. Curator Annette DiMeo Carlozzi, recently retired from the Blanton Museum of Art at the University of Texas at Austin, has taken a loose, inspirational approach to exploring "new resonances" in more than 20 works in various media by 17 internationally acclaimed artists.

Carlozzi has served as a curatorial panelist, writer and board advisor to ArtPace. She knew Linda Pace well and conceived "Immersed" as a tribute to the pioneering spirit and generosity of the ArtPace founder. Drawing from the foundation's growing collection of more than 800 paintings, sculptures, installations and video works, Carlozzi said her selections are intended to "evoke the cool heat of intense engagement, riffing in unexpected ways on the immersive experiences of art-making and art-viewing."

Freed from institutional restraints and breaking with the typical didactic, linear, rigid installations of most museum shows, Carlozzi has been more freewheeling in how the pieces are displayed. Along with the usual staid list of materials, she's added lyrical observations and existential questions to the wall labels. And while several world-famous male artists are included, female artists make some of the strongest statements.

For example, Anne Chu's View of a Gorge (1999) is a miniature river gorge made with dye and oil on wood. The two large, towering pieces look like sections of canyon plucked from Big Bend National Park and shrunk to a human scale. Setting them slightly apart provides the illusion of a river flowing between the two cliff walls. On the wall label, Carlozzi notes: "Washes of color absorbed by soft, carved wood. Majestic mountains perched on steel – no purples or greens – just a dry sliver of space between. Gorge, gorgeous: seduced there, would we ever emerge?"

Designed more to spark the viewer's imagination than merely educate, Carlozzi's provocative comments provide a more interactive way of engaging with the artwork.

Offering hope for the millennial generation, Miwa Yanagi's Yuka (2000) is fun and inspiring. The large-scale photograph shows an older woman with bright red dyed hair throwing back her head and laughing wildly as she rides in a motorcycle's sidecar roaring across the Golden Gate Bridge in San Francisco. For her My Grandmothers series, the Japanese artist interviewed young women between the ages of 14 and 20 and asked them to imagine what their life would be like in 50 years. Yanagi then worked with models, make-up, props and software to create the young women's vision of the future. In her zesty prediction, Yuka imagined in her 70s she would be living on the West Coast with her "playboy" lover. Her lust for life is exhilarating. 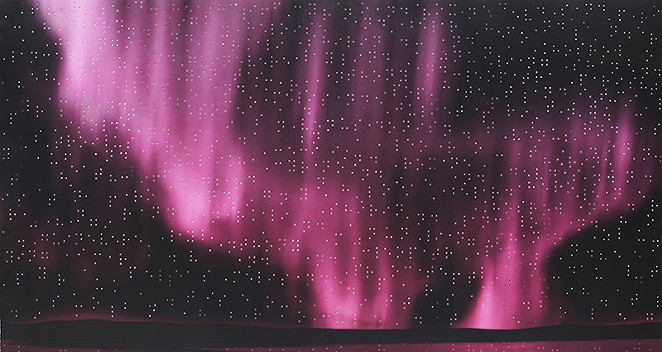 Teresita Fernández, who designed the adjacent CHRISpark, splashes a pink-and-black aurora borealis across the sky in her dramatic Night Writing (Tristan and Isolde) (2011). But complicating the message, tactile Braille writing is etched in the hand-dyed and formed paper pulp she used as a canvas. Rather than providing an easy-to-read image, Fernández employed the musical techniques of Richard Wagner's mid-19th century opera – chromaticism, tonality, orchestral color and harmonic suspension – to make her intricately crafted work more tantalizing and mysterious. Carlozzi notes: "She leaves no choice but to stop asking logical questions (What is this image? How does it operate?); we can only submit to the work's effect."

Cinematic conceptualism might be a good way to describe these large-scale works that "immerse" viewers in the artist's richly imagined universe. Surasi Kusolwong adds three-dimensional plastic fruit to her vividly colored photograph of an Asian river market in Small Is Beautiful (Gold Floating Market) (2002). Catherine Opie's fog-bound photograph is part of a suite that captures a line of surfers waiting for a wave on a gray, wintry day. 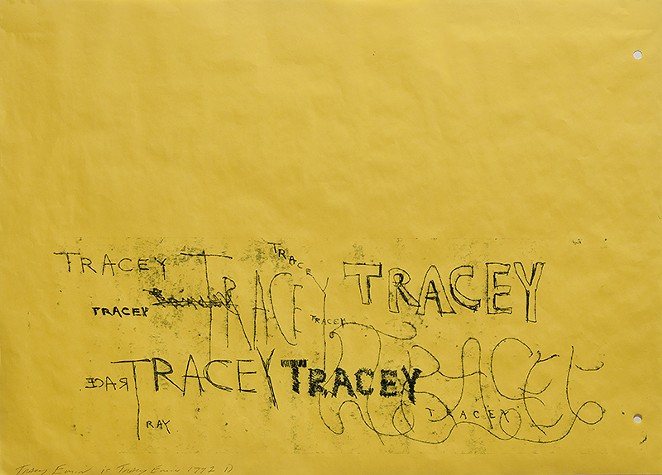 By writing her name obsessively in her monoprints on yellow paper, is British artist Tracey Emin commenting on how women should put themselves first, or is it evidence of the single-minded ambition that drove her from being the bad girl of the Young British Artists in the 1980s to becoming a respected member of the Royal Academy of Arts? Eccentrically, Carlozzi placed acclaimed British sculptor Antony Gormley's small drawing, Being (1995), high on the wall, but it's an appropriate spot for the haunting minimalist landscape that appears to be a lonely plain on the moon.

Perhaps the best made-in-San Antonio but not at Artpace work is Terry Adkins' Bouquet (2000), a sunflower-like mandala made with pants-leg stencils the Brooklyn and Philadelphia-based artist scavenged during his month-long Finesilver Gallery residency in 2000. Working in the Finesilver Building, formerly a uniform-manufacturing business, Adkins created dozens of sculptures out of the factory's discarded materials while listening to Robert Johnson-inspired blues on his boombox.

"Immersed" reflects the wide-ranging taste of Linda Pace, but the foundation continues to add works, recently announcing three significant 2015 acquisitions, including Isaac Julien's 3-screen film installation, Playtime (2014). The foundation also acquired works by two important San Antonio artists. Alejandro Diaz's Muebles — life-size, cast-resin, migrant-worker figures posed as furniture — were shown last summer in the foundation's gallery. Jesse Amado debuted his felt sculptures and wall hangings in "30 Day Rx" last spring at Ruiz-Healy Art. The show marked his return to art making after a five-year battle with cancer, which, ironically, he first learned about while working on Days, his lush curtain of crystal teardrops at the Central Library made in commemoration of Linda Pace.