In Defense of Torchy's 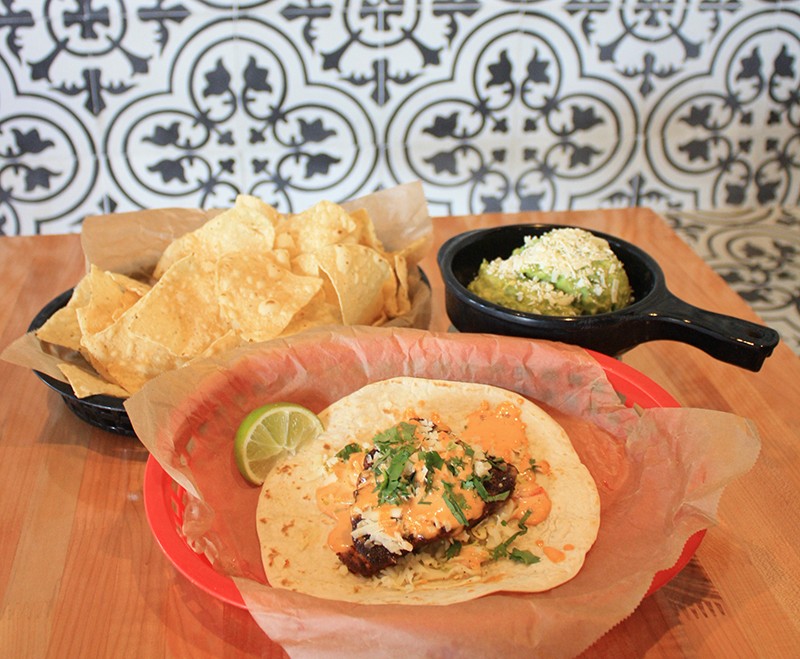 Let's get this out of the way — I don't hate Torchy's. This feels like a confession, and I'm up against a jury of my peers who are all picking apart my level of puro. In my defense — actually, more in Torchy's defense — the Austin transplant (I can feel collective eye rolls while typing) is a small business that's found success across Texas and I can't knock 'em for that.

And based on my last three visits to the Lincoln Heights joint, likely the first of more locations to hit SA, Torchy's has a serious following in the Alamo City. We could argue about its location within SA, and that we already have enough taco places, and whether any self-respecting San Antonian should stand in line for tacos. But here's the thing: we could debate all day, and the line at Torchy's would still be long.

I popped in a month after the store opened, on a cold Monday evening, confident that the place would be close to empty. Nope. I was met with a line of customers at least 20 deep waiting to order, and a bustling dining room. As seated groups made no intention of clearing out, I decided to take my order to go. I chose the Trailer Park, the Ranch Hand and the Taco of the Month for January, the Tuk Tuk with strong Thai influences. Learn from my mistakes and order your tacos at the bar.

A quick jaunt home, and my tacos were still warm inside their foil packaging. I could bitch about them not being the most visually appealing of things, but taco presentation hardly ever fills that bill. As a fan of breakfast for dinner, the Ranch Hand hit all the right notes — tender, well-seasoned beef fajita, scrambled eggs, shredded cheese and a dash of their Diablo sauce — though the tortilla wasn't my favorite. That honor goes to my neighborhood taco joint, Mary Lou's Cafe.

So did I make my Trailer Park (fried chicken, green chiles, lettuce, pico, cheese and a creamy Poblano sauce) "trashy" by trading lettuce for queso? Maybe. Do I regret it one bit? No. And when it came down to the Tuk Tuk, the Thai beef fajita taco was loaded with crunchy toppings — a cooked cabbage slaw, a pickled cucumber and carrot salad — along with Sriracha, jack cheese, an avocado sauce, crushed peanuts and fresh mint. Was it one ingredient too many? Sure, but they all worked harmoniously. No complaints here.

My second visit, this time on a Friday evening, wasn't as satiating. Surprisingly, the line wasn't out the door, and there were plenty of tables inside the bright, airy space that. much like its tacos. mixes various materials to pleasing results. But while seating wasn't an issue, and our food came out quite quickly, what was delivered wasn't damn good. Choosing to indulge in more breakfast (served all day), I went with the migas taco, and the Wrangler. Unfortunately, the scrambled eggs on both tacos were browned and cold. The shredded cheese sat lifeless on top. I wondered — why do bad tacos happen to good people? Was it the puro gods punishing me for trusting Torchy's? I pondered this over a good bowl of guac (which uses real avocados to tasty results) and the signature green chile queso.

Not one to trash a restaurant based on a single less-than-stellar visit, I returned a third time, for lunch. I'm sure the 1.5-ounce margarita sample helped, but in any case, it was a fun visit. A Mr. Pink Ahi tuna taco on corn was pleasant and bright; the Ranch Hand satisfied once more; and the Baja Shrimp on corn (which I had sampled previously) gave local shrimp tacos a run for their money.

Will Torchy's replace my usual haunts? Probably not, but I'm pretty sure that's not what they're going for. This food-truck-turned-brick-and-mortar chain has its own distinct audience of folks that want way too many ingredients in a taco, and a solid marg to go with it. Torchy's Tacos is far from puro. It doesn't have to be, at least not when it gets its tacos right.