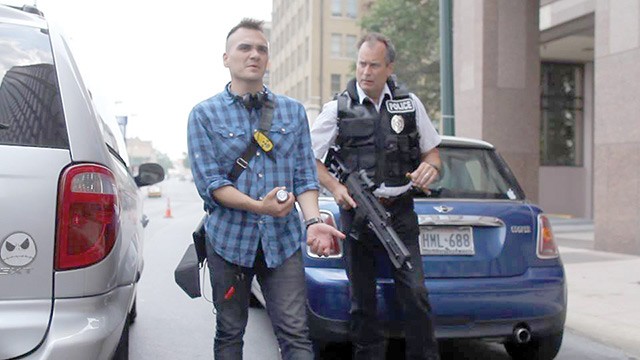 When it comes to making movies, it’s all personal for San Antonio-based filmmaker Mark Cantu. In his new indie superhero action/comedy Now Hiring, a feature film expanded from a short project he made in 2009, Cantu wanted to create a superhero universe built around his own experiences as a husband and father.

In Now Hiring, a movie shot entirely in San Antonio, unemployed, down-on-his-luck Joe Martin (Jason Sedillo) applies for a job as a birthday party performer only to find himself accidentally recruited to join a team of superheroes set on thwarting a supervillain’s plans to alter the world via time machine. Cantu spoke with the Current about his new film.

We already get a handful of superhero movies every year from Marvel and DC Comics. Why did you want to make one yourself?

I thought it would be fun to let loose and be in that world. I think [Now Hiring] is something different in the genre. I haven’t seen a lot of indie superhero movies that are talking about the things we are talking about. I don’t have a fetish for superheroes. I was coming at this from a family-first standpoint.

There are other independent superhero movies out there that explore similar themes. Is the family dynamic what inspired you and what makes this different?

Yeah, my whole life completely inspired the process. This story is about a guy trying to be the best version of himself he can be for the people he cares about. He feels powerless, like there’s no place for him. I’ve certainly felt like that before—like I wasn’t contributing. I started to put that into the screenplay. As soon as my wife and I started to grow our family, that story arc elevated even more. I was just trying to tell a good story. It just happens to be in the superhero genre.

You make quite a few references to other films in Now Hiring. What are some of those that people should look out for?

I threw in lines from Lethal Weapon. There’s stuff from The Terminator and The Last Boy Scout ... I enjoy nodding to the films I watched as a kid that have made me who I am today. If an average audience doesn’t get it, it doesn’t affect the movie. Edgar Wright and Simon Pegg do some of the same things in their movies.

Is this a one-and-done kind of movie, or could you see yourself building on this world you’ve created?

I would love to keep telling these stories. I mean, families continue to grow. Dynamics change and things evolve. That would be the next step for these characters. What’s the next stage in life for them? That’s why everything I do will always be personal. As a filmmaker, I want to find something that speaks to me and gives me a reason to contribute three years of my life to it.