In San Antonio, Rent Is Rising but Wages Aren’t 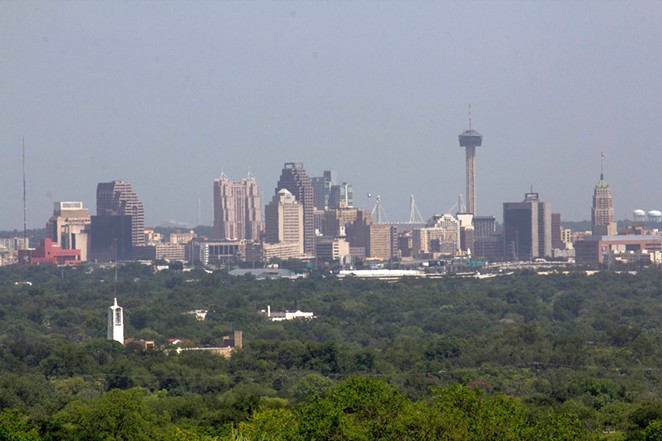 In the 40-minute bus ride across San Antonio that Barbie Hammond takes to work, there’s one topic of conversation that keeps coming up: the cost of rent.

“A lady that I talk to on the bus told me she had to move because of the rent increases,” the 57-year-old said. “And I told her, ‘Well, when Christmastime came, I got a note saying that the next month there will be a $60 increase in my apartment.’”

Hammond isn't alone. According to census data compiled by the company Apartment List, between 2008 and 2018, median rents increased from $860 to $1,002 in the San Antonio area. That 16.5% jump was more than the increase in the New York City region and almost the same as in the Los Angeles area.

Similar increases happened in the Dallas (18.7%) and Houston (16.1%) regions, but there’s something that makes the San Antonio area unique: While rents have been growing, wages have stagnated. Renters’ median incomes grew from $35,718 to $36,959 during the same period. That 3.5% increase was a third of the percentage growth seen in the Houston area and a fourth of the growth in the Dallas region. Those rent and wage figures were all adjusted for inflation.

The situation has people like Hammond, who is a certified assistant nurse, living paycheck to paycheck.

“I haven't seen a pay increase in … I can't even remember,” Hammond said. “Most of the jobs here are not gonna pay me more. San Antonio needs to catch up.”

Historically, rents in the United States grew hand-in-hand with wages. But after the Great Recession, housing prices started outpacing income. In Texas, the state's continued population growth has created more demand for housing, which has raised prices. And in San Antonio, a city with some of the worst poverty and segregation rates in the country, low-income households are having trouble keeping up with the cost of living.

"As a result of this growing gap, families are having to spend more of their already limited income,” said Lourdes Castro Ramírez, chair of the Housing Commission of the city of San Antonio.

According to data from the city, one in three households in the city spend more than 30% of their income on housing costs, the threshold that traditionally has been used to define what is affordable.

“And when we look at renters, one out of every two renters are paying more than 30% of their income,” Castro Ramírez said.

For her, the reasons are multiple and complex, but a primary factor is the kind of housing being built. In 2005, San Antonio had 14,000 units available for people earning between $14,780 and $29,561, according to a report from the Housing Policy Mayor’s Task Force. In 2016, there were only 2,400 units available for this low-income group.

“There's not enough housing for working individuals that are making $15 an hour or below,” said Castro Ramírez.

Some also point out the effects of urban revitalization. In 2010, then-Mayor Julián Castro promoted the so-called "Decade of Downtown," an initiative that spurred millions of dollars in development.

Current Mayor Ron Nirenberg told Folo Media in 2017 that the initiative “left out affordability so that only certain portions of our community can actually benefit from that revitalization.”

The increased property values in downtown San Antonio had a ripple effect, making the surrounding neighborhoods more attractive to investors and more expensive for people already living there.

“In San Antonio, some of the poorest areas of the city are the closest to downtown, so the places where you saw the fastest rates of real estate price appreciation were also where the lowest-income people live,” said Noel Poyo, executive director of the National Association for Latino Community Asset Builders. “This doesn't mean that investment policies are a bad idea. It means that we should be thinking about the impact that they could have on the back and on the front end.”

Housing providers say the city that once had a reputation for being affordable no longer is.

“There’s absolutely more demand,” said Jennifer González, executive director of the Alamo Community Group, a nonprofit that provides affordable housing. “Our occupancy is very high. If a unit becomes available, someone is right away looking to rent that unit.”

González said that people seeking their services now include middle-income residents and not just minimum-wage earners. A decade ago, her clients would make between $7 and $12 per hour. They were mainly single mothers, many of them without college degrees.

“Now it’s gone up to $15 per hour,” González said. “We are seeing two-headed households with fewer children, younger households. They have a four-year degree or a two-year degree where they’re nurses, medical assistants or dental hygienists. We’re seeing a more educated population.”

Melissa Romo, 36, has worked hard to find a comfortable home for her two kids. Five years ago, she was living in public housing. She earned a degree needed to become a dental assistant and found a job with a higher income. A bigger paycheck meant her federal housing subsidy was reduced. Then she experienced an unexpected health problem, and she couldn't work as many hours. That shrank her paycheck.

“I got behind and they evicted me pretty quickly,” she said.

Romo ended up in a transitional living facility for families for two years. There, she slowly managed to fix her credit score while studying to get a degree required to become a chemical dependency counselor.

Today, she’s able to afford the $850 monthly rent on a two-bedroom duplex northwest of downtown.

“It’s the lowest I could find for a two-bedroom in that area. It took me six months to find that place,” she said.

Five years ago, she was making $11 an hour as a dental assistant. Today, after several jobs and a new diploma, she earns $16.75.

“It’s not a huge difference. I feel like I’m in the same position,” Romo said. “The thing that keeps me afloat is changing jobs every six months to a year. I utilize that experience and I use that as a negotiation tool. It’s been helpful, but it’s not very stable.”

According to experts, San Antonio’s lack of upward mobility affects residents' quality of life beyond just limiting their housing options.

Closing the gap between wages and rents is a bigger challenge in the San Antonio area than in the Austin, Dallas, El Paso and Houston regions.

“Rents are going up everywhere, and there are a lot of reasons for that,” said Christine Drennon, director of urban studies at Trinity University. “The renter income is the interesting statistic here: We are eight times lower than a place like El Paso in renter income change, for example.”

The biomedical sector is the San Antonio region's biggest employer, but jobs in the high-paying areas of science, engineering, mathematics and information technology have remained flat between 2011 and 2017. Area residents still make 10% less than the average American worker, according to the U.S. Bureau of Labor.

“Wages are connected to a broader economy,” said Poyo. “And then the other thing is that this is about matching skills and education with current day jobs. You can retrain people — we need to do that workforce development, and we need to be much better about it. But you just don't turn corners that fast on people's educations and capacities.”

College enrollment and the percentage of adults with college degrees haven’t increased significantly in Bexar County, according to the nonprofit SA2020.

In 2017, Nirenberg appointed a Housing Policy Task Force that recommended hiring a housing czar, building more affordable homes and safeguarding low-income renters from displacement. It also suggested preventing the demolition and mitigating the disrepair of existing affordable homes. In September last year, the City Council approved $34.4 million for these goals.

“There is political will to continue to support this,” said Castro Ramírez. “There are about 2,500 units that are in the production or rehabilitation pipeline, which is pretty significant. But we are still not producing enough units for lower income.”

Council member Roberto Treviño has been promoting several measures, including a program to defend low-income renters from evictions, which can lead to more expensive rents in the future or even homelessness. Between 2011 and 2018, evictions grew 80%, according to the San Antonio Express-News.

Next month, the city is starting a pilot for a right-to-counsel program, in which tenants receive free legal assistance if they decide to go to court to fight their evictions.

“In San Antonio, only 1% of people in the process of eviction stay at home,” said Triviño. “We have an issue of affordable housing and wages, so we can’t exacerbate those with this amount of eviction that we see in San Antonio.”

“Trying to get counsel for people who are in the eviction process is great and we need it, but that’s not systemic change,” said Drennon. “Systemic change would be trying to get more affordable units on the ground.”

San Antonio, by charter, can’t issue debt to produce affordable homes, which limits the city's ability to fund housing. But city leaders hope voters will approve a charter amendment next year to amend the rule.

Barbie Hammond, in the meantime, is calculating how she will manage the $60 increase in her rent. She normally receives two checks a month. The first goes to the rent; the second goes to her other expenses. But now rent will start taking part of her second check.

“Sixty dollars is a lot of money to me,” Hammond said. “I appreciate the help that I get, but you're raising it to a point where that's all I'm gonna be able to pay.”