‘In Secret:’ This movie’s better than the book 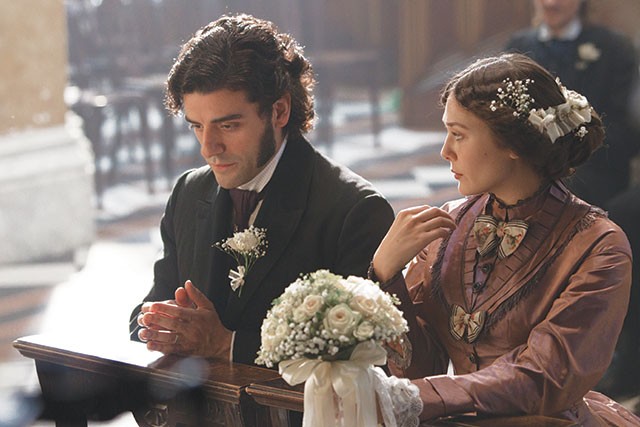 One of the least pleasant leisure activities any human being can experience is the drudgery of reading Émile Zola’s Thérèse Raquin. Zola’s exploration of naturalism—a bleak worldview wherein characters are placed in realistic situations and play out parts dictated more by their social environment than anything else—is grim.

Zola further maintained that the characters in Thérèse Raquin are made to behave the way they do by their “nerves and blood.” He claimed it was a scientific exploration.

That’s crap. There isn’t a more writerly device than to stick characters in a particular set of situations and then have them react in exactly the way they’ve been designed. Thérèse Raquin feels more like social realism with a left-wing bent. But social realism already existed, so why not invent a subgenre?

In any event, Thérèse Raquin is so dreary and desolate, it’s hard to imagine any filmmaker wanting to take it on. But it has been, and more than once. In Secret is just the latest version of Thérèse Raquin (Neal Bell’s play is also listed as source material).

Somehow, on screen, it’s far more captivating than on the page. The miserable haberdashery where Thérèse works with her aunt and mother-in-law (yes, the same person) seems appropriately dingy, and her husband Camille (he’s also the first cousin) is duly sickly, weak and irritating.

Maybe In Secret works because Thérèse is played by Elizabeth Olsen—the talented Olsen sibling. She’s aided immensely by Jessica Lange as her aunt (and mother-in-law) Madame Raquin, Tom Felton as Camille (not a big leap from his Draco Malfoy), and Oscar Isaac, the erstwhile Llewyn Davis, as Laurent, the man who becomes Thérèse’s lover and co-conspirator.

Plot-wise, In Secret sticks closely to its source text. Thérèse is left as a child with her aunt and the aunt’s sickly son Camille. Thérèse is made to marry Camille (she hates the idea). Madame Raquin, Camille and Thérèse relocate to Paris so Camille can work in an office while the women run a clothing store. Eventually, Camille runs into his childhood friend Laurent and brings him around for a weekly game of dominoes, and Thérèse and Laurent begin a torrid affair. Eventually Thérèse and Laurent kill Camille and—once their guilt and mistrust gets the better of them—try to kill each other.

Ah, nerves and blood. Both those words, repeated on a nearly infinite loop in Zola’s text, have been expunged from In Secret. Director and screenwriter Charlie Stratton has dispatched with Zola’s scientific musings, at least on a surface level, and directed a sort of 19th century film noir that relies on mounting dread, recrimination, lust and avarice as its primary story motivations.

In other words, it’s just the sort of things that makes a good murder story. Olsen uses her big peepers well, conveying Thérèse’s inner torment with a slow burn until her eyes seem ready to burst from her head. She also delivers some pretty outrageous dialogue with a straight face and sells it. Takes this line that she utters to Laurent during one of their trysts: “You have no idea how much they’ve stolen from me. I almost ran away twice but [Madam Raquin] always told me I couldn’t survive without them and I believed her. And now there’s nothing left of me but burned wick and wisp of smoke.”

Sure, people spoke differently in 1867 than, say, 2014, but that’s a mouthful of corn in any century. Still, somehow, as Olsen says it, caressing Isaac during a rendezvous, her voice low and relaxed while she’s away for a few moments from her pathetic life, it works.

Isaac, for all his promise in Drive and Inside Llewyn Davis, doesn’t come off as well, but that’s probably because Laurent exists solely as a dramatic device that allows Thérèse to effectively access the dark side. Lange appears much better. She uses a steely gaze that makes even Madame Raquin’s most innocuous movements sinister. Better yet is the way she tosses out perfectly dreadful statements about Thérèse’s place in their family as if the poor girl were just an afterthought.

Eventually, like Thérèse Raquin, In Secret slows to a crawl. After Thérèse and Laurent drown Camille—off camera, but there are fleeting, horrible glimpses in flashback—they sink into a passionless marriage that’s been destroyed by memories of their crime. It’s in the movie’s final 20 minutes that Thérèse and Laurent spit bile at each other and treat Madame Raquin, who’s been sidelined by a stroke, like a rag doll, hauling her from room to room in the house while pointing fingers at each other.

The deliberate pace in the book is torture; on screen it makes sense. All of the characters are trapped in a terrible existence that makes each day feel like a month. And the ending is inevitable—but only because it’s written that way.