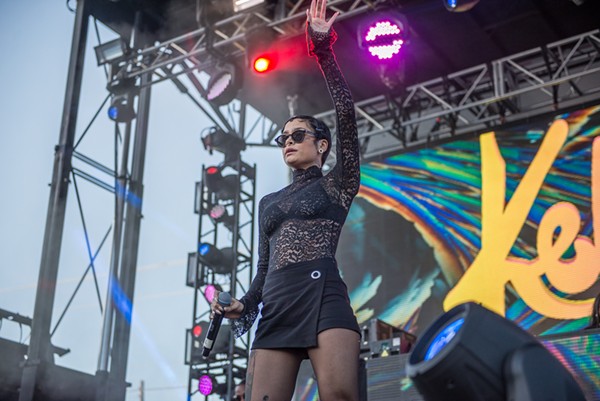 The permanent smell of weed wafted through the air, christening the fest in a way into the ranks of Electric Daisy Carnival. But this wasn’t like the EDM holy land or any other similar hip hop hotspot: Mala Luna Fest is in a class of its own, partly because it’s unique to a city that's not renowned for large music festivals, San Antonio.

Along with the inaugural fest, heavy artillery was called for and answered with artist such as G-Eazy, Travis Scott and Kaskade, all high caliber superstars, crammed into two days on Halloween Weekend.

While pot smoke was the official scent of Mala Luna Fest, the food selection - even with the insanely wrapped around lines – was better than average fest options. Big Daddies Eats and Treats set up a colorful food truck, and other restaurants such as Little Jamaica and Frank fueled fest goers. Other attractions included a cube of large surfaces for local artists to work their magic on, Halloween/day of the dead face themed face painting, and a vinyl records booth.

The festival attire was standard – crocheted fringe heavy tops, string bikinis and sun-shielding baseball hats – with the addition of costumes. Space Jam was a reoccurring look with sugar skull skeletons and risqué rave monsters coming in second, celebrating the marriage of hip hop and Halloween.

The music made the compact festival worth the over-crowding, despite the almost dangerous conditions. During the start of Lil Yachty’s set, a stampede of Urban Outfitters attire, kitty ears, and flower crowns almost knocked me down multiple times and pulled me under, like an undertow at the beach, as they rushed the stage. Too many people crammed into the less-than-spacious Lone Star Brewery was a hazard that thankfully didn’t result in any causalities.
Other than the dense crowd, the fest was free of drama and danger as no one (from my experience) broke out into a fist fight or brawl.

The festival schedule was well-organized: local performers kicked off the show and the big-timers hitting the stage later in the day on one stage, giving the homegrown rappers massive exposure and a bigger platform. Highlights include Phillip Wolf and his crew throwing packaged rolling papers at the audience, while others such as Kranium and Greg G let their music shine in no-frills sets.

Around 5 p.m., the crowd started to bloom, with young Cash Money Records artist Jacquees testing the waters as he serenaded the crowd with new songs off his debut “Good Feeling” and older favorites, “Like Baby.”

Shit got real when Lil Yachty rocked the boat with songs off his three mixtapes, most notably “Lil Boat.” But Lil Yachty’s music alone wasn’t causing a stir: He amped up a feud with Soulja Boy during his whole set. From a white shirt with “Pray 4 Soulja” written in sharpie to an on-the-spot diss track where the whole crowd was chanting “fuck Soulja Boy,” it’s safe to say that Lil Boat has sunk the “Crank That” rapper’s ship. The beef over model India Love, who the rappers both have ties to, is currently in the process of being squashed. After the dust settled, Lil Yauchy closed his set with “One Night” before his final sentiment “Fuck Soulja Boy, stay in school.”

Duo Rae Sremmurd followed up with pink and red furs (despite the sweltering Texas heat that plagued the festival), and bomb ass hits, such as “Black Beatles” and “No Flex Zone.” The whole crowd was screaming the addictive chorus “that girl is a real crowd pleaser” and “somebody come get her, she’s dancing like a stripper” on the top of their lungs as Rae Sremmurd energetically pumped up the audience. Tory Lanez, Steve Aoki and Travis Scott rounded out Saturday night, showing that three totally different artists can join each other at the Lone Star Brewery under the same night sky.

Following the previous day and the screams of “Free Kevin Gates” and “Fuck Donald Trump,” Sunday was just as heavy, but more low-key in mood. Lil Uzi Vert started working the big crowds with bangers “Money Longer” and “You Was Right,” complementing the “girl who flashed her tits” as “cool,” and sparking a hip hop mosh pit.

Following was sultry songstress Kehlani. The 21-year-old R&B singer-songwriter brought some much needed girl-power to Mala Luna, and she acknowledged it. "Who’re my girls out there” she said, “You’re important, just making sure you know that.” She blew the fest up when she broke out her hit song from the Suicide Squad soundtrack, “Gangsta.” “I need a gangsta to love me better,” she cooed in the sing-a-long chorus. She broke out new material from her upcoming debut album, including future radio jam “CRZY.”

The name on everyone’s tongue Sunday night was G-Eazy. Making a name for himself on radio pop hits “Me, Myself, And I” and Britney Spears’ latest single “Make Me…” the “Coldest White Rapper since the Joker" didn’t disappoint the hardcore fans as he broke out his heaviest songs, dressed as Jared Leto’s gangsta Joker. Although things got a little Macklemore on his “Fuck Donald Trump” freestyle and PSA, he kept it edgy on with lyrics “Pussy is my favorite vice” from “Order More” and “I’m fucking your girlfriend, and there’s nothing you can about it” from “I Mean It.”

G-Eazy closed with “You’ve been the best crowd of my entire life.” And his words were true. The Mala Luna Fest’s crowd showed serious love to all the performers with the intention to vibe well and, most of all, to have a good time.