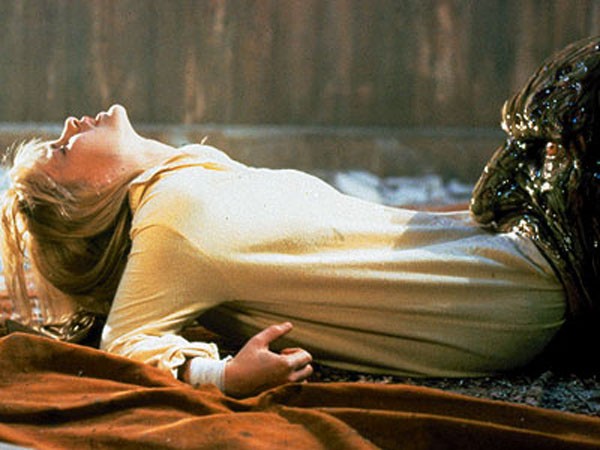 I was about eight years old the first time I saw a horror movie. It was circa 1988. I was spending the day with my grandmother at her house and my uncle, who was probably in his early 20s at the time, had woken up that morning and popped a VHS copy of A Nightmare on Elm Street 3: Dream Warriors in the VCR. Unbeknownst to me, I walked into the living room from the kitchen, where I had just poured myself a big bowl of Apple Jacks, thinking Saturday morning cartoons were on menu.

Unfortunately, The Bugs Bunny & Tweety Show was not what my eyes saw when I gazed upon the TV. Instead, it was the slimy, gargantuan head of Elm Street villain Freddy Krueger eating up a teenage Patricia Arquette’s legs as fast as I was shoveling spoonfuls of cereal in my mouth. Since I had never seen a horror movie before, it took a couple of seconds to register what exactly I was looking at on the screen. It was the sickest thing I had ever seen in my short life and I proved it by upchucking my breakfast all over the floor.

Today, horror movies and TV shows don’t have that same nauseating effect on me as when I was in elementary school, but I still wouldn’t consider myself a huge fan of the genre. I can appreciate the classics and recent well-made horror films like The Babadook, 28 Days Later, Let the Right One In, It Follows or even something as gory as The Descent, but I’m definitely not someone who would seek out everything categorized as horror just because I heard there was a cool decapitation scene or because Eli Roth and Rob Zombie are stabbing each other in the eyeball with a corkscrew and filming it.

With that said, if you are the type of horror hound that enjoys your entertainment on the big and small screen as blood-soaked and sinister as possible, the inaugural Terror Expo in San Antonio might be just what Dr. Heiter ordered (along with that one surgical procedure where your mouth is sewn to someone else's anus). The event is January 22-24, 2016 at the Henry B. Gonzalez Convention Center.

Scheduled to be in attendance and to participate in panel discussions are celebrities such as Robert Englund (A Nightmare of Elm Street franchise), Tobin Bell (Saw franchise), Sid Haig (The Devil’s Rejects), Scott Wilson and Emily Kinney (TV’s The Walking Dead), Ian Ziering and Tara Reid (Sharknado franchise), and Denis O’Hare and Naomi Grossman (TV’s American Horror Story), among many others. Also on the roster for autographs and meet-and-greets are celebrities including Paula Shaw and Ken Kirzinger (Freddy vs. Jason), Philip Friedman (Insidious), and Danielle Bisutti (The Curse of Chucky), just to name a few. There will also be photo opportunities and vendor booths all three days.

“San Antonio has a big horror community,” said Apple de la Fuente, 40, co-founder of the Terror Expo as well as founder of the Alamo City Comic Con, Alamo City Film Festival and the upcoming Cyber City Con, a new convention celebrating all things robotic. “We all have our favorite horror films. They’re a lot of fun.”

Like me, de la Fuente likes classic horror films. He said his first memory of a horror movie was going to the old Mission Drive-In with his family when he was about 5-years-old to see a re-release of 1954’s Creature from the Black Lagoon starring Richard Carlson and Julia Adams. He hopes horror fans will be just as thrilled about the Terror Expo as he was watching an amphibious human wreaking havoc on a team of geologists in the Amazon jungle.

“As San Antonians, we come out and support our conventions,” de la Fuente said. “Everyone likes different things, so we’re trying to make that happen for this city. Whatever you’re into, we’re going to bring it and show it. You can’t neglect the horror fans.”