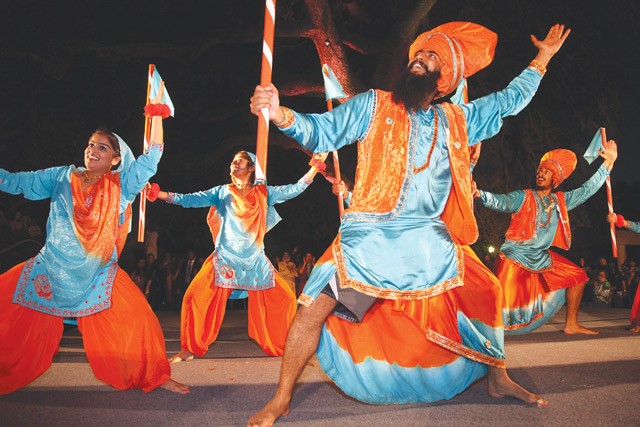 Enticing aromas of dosas and tandoori flavors, a rainbow of Indian jewelry and clothing, an array of mesmerizing performances suitable for anyone's taste: this is how San Antonio commemorated the city's fourth annual Diwali, the Hindu festival of lights, which represents the welcoming of good by dispelling the bad. It was my fortune to attend as both an audience member and a performer with a backstage glimpse into this grand event.

The festival boasted three stages simultaneously showcasing performances for the 15,000-plus attendees to enjoy. DJ Rahul started the party early with soulful yet modern rhythms of the latest Bollywood and bhangra rhythms, complete with dance-along sessions. The exquisite classical dances of India, solo singing performances, and fusion dances were displayed on the second stage. On the main stage, the theme was a parade of nations, demonstrating the diversity of India through folk-themed dances from each Indian state, as the eloquent emcee Suhail Arastu highlighted regional characteristics. I was involved in choreographing and performing for the northern state of Uttar Pradesh, and it was backstage that I witnessed organizers Kausi Subramaniam, Hema Viswanathan, Bala Viswanathan and Vijaya Bola from the non-profit Anuja fervently queuing up the near hundred dancers so that the show did not miss a beat.

"By strengthening ties to sister cities like Chennai, India, San Antonio is set to become a cosmopolitan city flourishing in the creative arts with events like Diwali," said Anuja Cultural and Arts Chair Arastu said. "San Antonio's setting a fine precedent!" Naturally, Tamil Nadu, the home of San Antonio's sister city Chennai, was one of the featured states, with women wearing boldly colored saris and men with tall pots on their heads, energetically dancing to folk music from Tamil cinema. The central state of Maharastra was also present, with their traditionally wrapped nine-yard saris and glittering gold nose rings, expressively dancing to songs of love and life. The night culminated in a diya ceremony auspiciously true to the original, where attendees lit candles and released them to float on the waters of Hemisfair Park.

Mayor Julián Castro and several dignitaries closed the night with glowing praise for our country's only city-sponsored Diwali, some calling it the best Diwali festival in the United States. With the attention to detail in showcasing a "true cross-section of Indian culture," as General Consul Parvathaneni Harish dubbed it, and the sheer magnitude and grandeur of Hemisfair Park, the event was every bit deserving of the admiration.