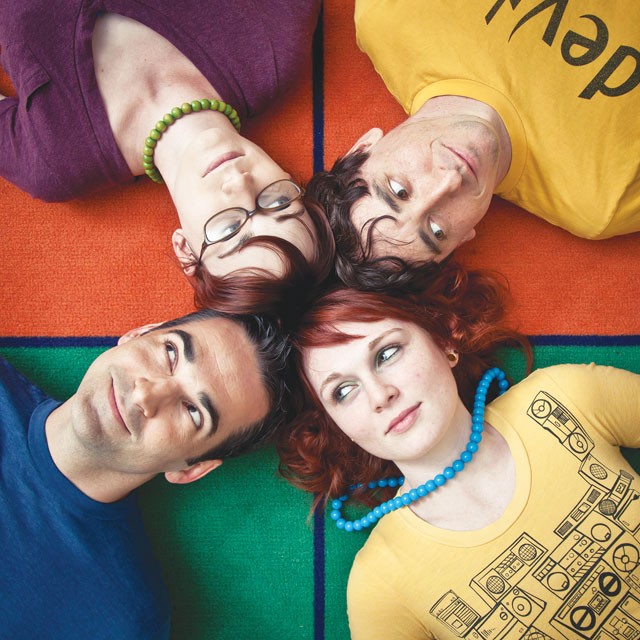 Let’s play which one of these ones isn’t like the other ones: (A) struggling indie-rock band, (B) Super Bowl ad jingle writer, (C) fanatical arts education advocate, (D) Rabbit!

All answers are correct except (D) Rabbit!, the fledgling pop-infused quartet that will make a stop at the Limelight this Thursday on their national tour Rabbit’s Music Stand Summer, promoting arts education and their new CD Go For It. Zanily happy and wide-eyed, they mix late ’60s bubblegum enthusiasm and four-part vocal harmonies with club synth to make tunes that hit with the staying power of that TV ditty you can’t scrub out of your ears. The Current spoke with Rabbit! founder Ashton Allen to get the scoop on the kid-friendly group.

“Devin and I, the other guy in the group, we write music for film and TV. It pays the bills,” Allen said. “I think Rabbit! was sort of a side project that kept rearing its head or showing up at our door, so to speak.”

Allen met Devin Moore during a 2007 Ashton Allen tour when Moore stepped in on bass. They immediately hit it off and went on to form a songwriting partnership that has licensed music to big ad buyers like Honda, Verizon, Frito Lay, and Crayola. They have also had a couple of theme songs for TV shows, like NBC’s currently airing Love Bites. Their biggest single day, however, was this winter’s Super Bowl XLV, when their music soundtracked the Comcast Xfinity ad. Needless to say, these guys got some chops, but what’s with the art-education thing and kids?

If you’ve been reading the Current the last half-year, you probably know that funding for art and music education has taken a serious hit in Texas. In many other states — like Kansas, where the state arts agency was disbanded — it’s even worse. Allen and Moore decided to use their tour as a shout-out to beleaguered arts educators, and have met with arts-focused community groups during their tour, making stops at schools, coffee houses, summer camps, and other places art and music teachers — and kids — congregate.

“We kind of struck on the idea of music and arts education, and what a great benefit it’s been to us in our formative years,” Allen said. “What a tragedy it is that a lot of kids these days, in big cities and small towns, don’t have that same education. It shouldn’t be a luxury. Which to us isn’t about being a full-time musician, but is about learning how to become a full-time person.”

The tour is being documented by four videographers who are traveling separate legs of the journey to make a video short. Money left over from the summer project go to the Rabbit! Foundation to hopefully fund the making of a feature-length documentary.

Using their fanbase to direct the band’s travels, Rabbit! has played in small-town country bars and prestigious big-city joints, too. In L.A. they played a packed show at Hotel Café, the noted singer-songwriter hangout. “A friend of ours who plays keys and various instruments in our band came out of the shell and really wanted us to play San Antonio,” Allen said. “He has been championing the Limelight, so that’s where it’s happening.” •