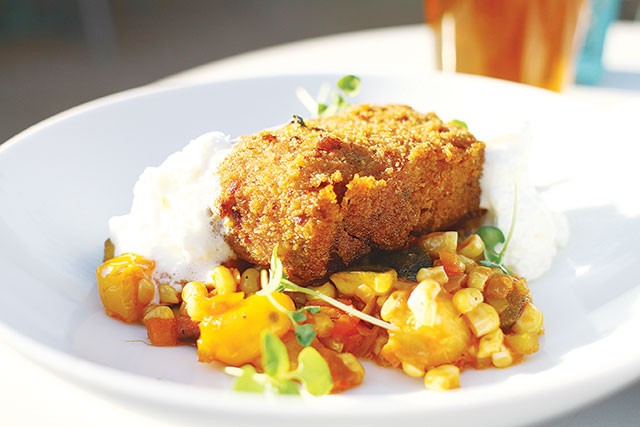 The Dady brothers are hoping to smoke out the competition in a barbeque contest next month. Jason and Jake Dady will be competing in the SMOKE@ICC Barbeque Competition in NYC on September 28. At the competition, 10 teams will smoke meats in four rounds. The winning team will get a trip to Korea, a smoker and a chance to compete at the World Food Championships. The Dadys are representing San Antonio and a team from Austin’s The Carillon will be competing for the 512. If you really want to attend the event, go to StarChefs.com for more info. But I’d recommend thinking flavorful, smoky thoughts in one of Dady’s restaurants (Two Bros. BBQ Market, Tre Trattoria, BIN 555, DUK Truck) on September 28 in support of our hometown chefs.

SA’s getting some love on the Cooking Channel show Chuck’s Eat the Street in San Antonio–episode airs multiple times on August 22 and 24. Canadian chef Chuck Hughes travels the globe in search of the coolest streets with the best food. In the SA episode, it looks like he took St. Mary’s into downtown, hitting The Monterey, Biga on the Banks, El Milagrito and Restaurant Gwendolyn. Check the Cooking Channel’s website for airing times.

Rickshaw Stop was featured in The Daily Meal’s 101 Best Food Truck Feature in early August on the truck’s history, where the yummy food comes from and plans for the future. The truck, which specializes in Pakistani street food, was the No. 7 food truck on the site’s 2013 list of the 101 Best Food Trucks in America.

This weekend, head to Vinously Speaking (7271 Wurzbach, #117), a local wine shop, for a wine and cupcake pairing. On Saturday, August 24 from 1–7 p.m., the shop is pairing bubbly wines with cupcakes from Dealicious Cakes. Cupcakes will be for sale as well. Two pals, one with a master’s degree in wine business studies, own the small shop, and hope to raise enough funds to add a wine bar soon.

Now that One Lucky Duck (303 Pearl Pkwy, Ste 109) is open at the Pearl, you should have no problem finding juice in that area. There’s also Revolucion on Broadway and Sunset and Urth on McCullough. And just to sweeten the deal, Revolucion offers a deposit system (where you’re charged an extra dollar to take a bottle, and refunded a dollar when you bring the bottle back) and Urth gives discounts if you bring in glass bottles. After the gluttony of Restaurant Week, we might need to swap out a lunch for a green juice.

Boiler House (312 Pearl Pkwy) rolled out some new summer menu items: oysters Rockefeller, rum-glazed pork belly, salmon ceviche, strawberry shortcake and more. Head to the Pearl to try them yourself. Also, sister restaurant Max’s Wine Dive has a new executive chef, Gus Gonzalez. You may recall the name from Gonzalez’ former turns at G&G Mobile Bistro and Lüke San Antonio. Max’s lets their chefs get creative, so expect to see some new menu items at the restaurant in the near future.