‘Inside Llewyn Davis’ is a Great Study of a Flawed Character 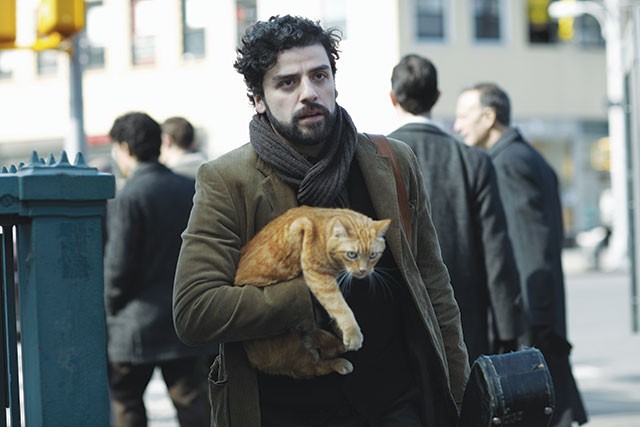 Somewhere in the first act of Inside Llewyn Davis, the latest in the Coen brothers’ long list of instant classics, our perennially broke and homeless folk (anti)hero—a wonderful Oscar Isaac, who earned a Golden Globe nomination for this role—gets some unexpected news several years too late. The way he reacts should finally debunk the myth of the Coen brothers being “cold” filmmakers. Detached? Maybe. The Coen brothers couldn’t care less about what you think of their movies, but Isaac’s eyes tell you everything you need to know about his shock and confusion upon hearing the news. And that’s what acting is all about.

The movie is vaguely (so vaguely) inspired by The Mayor of MacDougal Street, the posthumous autobiography of folksinger Dave Van Ronk (1936-2002). Llewyn Davis is a folkie in Greenwich Village circa 1961, he sports a goatee and has an album named Inside Llewyn Davis (with a similar cover to 1963’s Inside Dave Van Ronk), but the comparisons end there. Isaac doesn’t look or sound like Van Ronk, and this is not a recreation of his life. While a guy named Bob Dylan eclipsed Van Ronk, Davis’ career is marred by his self-absorption and inability to compromise. “That, and the fact that you’re an asshole!” as aptly put by his former flame Jean (Carey Mulligan, in a role where she personifies every woman ever fucked, literally or otherwise, by an undeserving loser, ever).

Not only is the movie not a reenactment of anybody’s real life; if you think this is a life-in-Greenwich-Village-in-the-’60s movie, you forgot that this is a film by the Coen brothers, neither of whom are too interested in “the truth.”

“The performers reflect absolutely nobody I knew in the folk-music world,” Van Ronk’s first wife Terri Thal told Vulture. “The world that [the movie characters] live in is a depressing, unhappy place, and we lived in a fun, musically vibrant, intellectually interesting world. People were competitive only in the sense that they were trying to be heard—they weren’t out to score above anybody else.”

On Coen Planet, that’s an irrelevant fact. Inside Llewyn Davis is yet another vehicle for the brothers to display their eye for detail (every character looks like previously sketched by Fellini), their technical mastery (each shot is a painting and Bruno Delbonnel’s cinematography so gorgeous I think of the movie in black-and-white terms) and subtle winks to their previous movies. John Goodman, who plays Roland Turner, reverses his role in Barton Fink and has a men’s restroom incident comparable to that of W.P. Mayhew, also a character from Barton Fink; and Turner’s chauffer basically has the same personality as the knucklehead who killed a cop in Fargo. Even the secretary at Davis’ record label looks like film producer Ben Geisler’s in Fink, to name a few things diehard fans will recognize.

-What fans may have trouble sussing out is a traditional story arc. This is just a week in the life of a struggling singer-songwriter wrestling with the big decision: should he continue? Should he give up and get a job? Davis is always on the move and you don’t get much more than great character study, great writing and great acting.

“The film doesn’t really have a plot,” Joel Coen said, perhaps jokingly, at a press conference in Cannes before the movie won the Grand Prix. “That concerned us at one point; that’s why we threw the cat in.”

But just like the Hotel Earle itself became a key character in Barton Fink, you can’t talk about Inside Llewyn Davis without mentioning its soundtrack. It’s another dynamite folk/bluegrass production by T Bone Burnett (O Brother Where Art Thou?), with the added element of Isaac actually singing, playing and even arranging some of the songs. His voice resembles that of John Mayer, and his fingerpicking has all the subtlety Davis’ personality lacks. It’s a breakthrough role for Isaac and another Coen brothers jewel you’ll go back to again and again to find things you missed the first time.