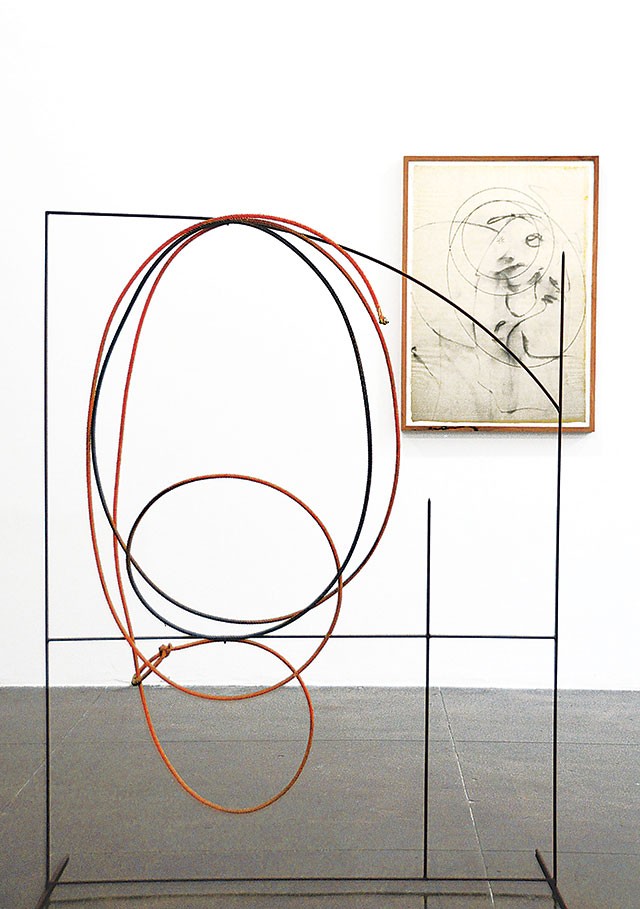 One of the most anticipated shows in town is the international-artist-in-residence exhibition at Artpace, on view three times a year at the renowned project space.

Presenting fresh work by a trio of guest artists chosen from Texas, the United States, and abroad, SA art aficionados look forward to seeing how their local artists rate compared to imported talent. But perhaps the real pull is the shear gutsiness of the endeavor. With only two months on site during the residency, creating a successful installation is risky business for any artist, regardless of origin.

Adam Putnam, a New Yorker born and raised, brings his interest in architectural spaces and performance to construct the coupling of what could pass as an absurdist theater set with a photo gallery. What appears to be a chimney pot tethered by a rope passed over a pulley sits ominously in the center of the gallery; on the other end of the line dangles a harness made for human wear. Dark black and white photographs document the artist’s stay in the room; behind a screen hides a small video display. Autobiography and thoughts on dwelling are much in evidence, but look closely. On one wall, a small shadow is cast, made by a plywood form blocking a lamp. The light also strikes a mirrored similar form; the two combine to create what appears to be a three-dimensional archway. This apparition, barely noticed by casual viewers, hints at the magician’s craft, filled with bravado and misdirection.

J. Parker Valentine, born in Austin, fills the walls of her space with drawings on bits of torn muslin and nearby sculptures made from lariats and fabricated metal. The walls are also marked with what seem to be dark smudges filled with arcing lines from afar, but on close examination, one glimpses ghostly faces within the tumultuous array. The drawn arcs mirror the curves of metal that frame the lariats, which swirl in series of ovals; creating rigid, yet intimate motion. The lariats transcend western kitsch; the implied metaphor of capture references not cattle but the artist’s body. The marks on the wall hold the record of the artist’s arms, which have pivoted from the shoulder time and time again. Drawing appears not only a matter of the eyes; the room almost seethes with physicality.

The body is once again the concern of the last of the three installations. Tala Madani, born in Tehran, Iran, and now living in New York, uses dark humor and the grotesque to tackle a strange pairing — suicide and light. Expansive windows let natural light pour into Madani’s second-story space during the day, and also allows one to peer down to the ground far below. A video of a little man terrorized by bright lights shows him gouging his eyes out to hide from the surveilling glare. Small paintings show light bulbs stuck in a number of human orifices. Large cartoonish paintings depict the point-of-view of someone contemplating a final jump: the tops of shoes on a ledge, and between two buildings, drifting clouds show that this is a real, real high building. The fall won’t be pretty. But will the subject take the leap?