International artists on the Dalai Lama 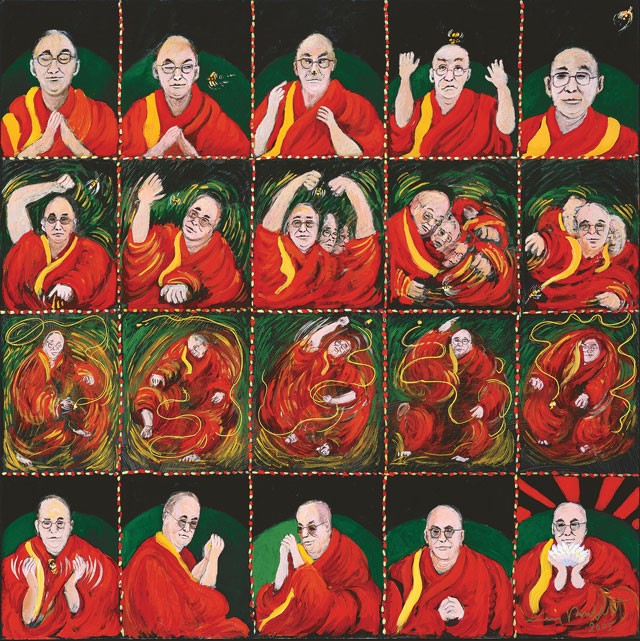 Good endings are important. “The Missing Peace: Artists Consider the Dalai Lama,” on view at SAMA to July 31, is finishing a five-year international tour at a location well suited for the exhibition. Organized by the Committee of 100 for Tibet and the Dalai Lama Foundation, the show complements the museum’s notable collection of Himalayan Buddhist art, but many of the new works on view seem to speak directly to issues that embroil Texas today.

That peace is a missing thing in the world is reflected in the show’s title, but what is it?

We often define peace negatively, as the absence of war, but Tenzin Gyatso, the Fourteenth Dalai Lama and spiritual leader of Tibet emphasizes that it is first a personal realization containing, “compassion, love and patience, which are essential if human beings are to achieve happiness.”

Exiled from his homeland in 1959, the Dalai Lama has commented on Tibet’s annexation by China as an opportunity for growth instead of disaster. “In the practice of tolerance,” he has said, “one’s enemy is the best teacher.” The show is a response by over 80 artists from 25 countries to his message of compassion and a study in the transformative power of art. Sometimes it works through humor.

In the museum’s entry room an introduction to the show includes The Dalai Lama’s Shoes, a 2005 Kirlian photograph by Sylvie Fleury. An attempt to portray the Dalai Lama’s aura through a technique that reveals a spectral glowing that seems to emanate from the shoes; the Dalai Lama commented that as they had been resoled several times, perhaps the captured essence was of his cobbler. His Holiness and the Bee (How a Little Annoyance Can Bring Great Joy), a painting by Guy Buffet, shows a winged intruder interrupting meditation. An action sequence ensues in blocked panels. After a frenzied chase and capture, a lotus flower — symbol of enlightenment — appears in the monk’s open hands. One might assume this is a Chinese bee.

The grid is a form used in other works in the show, notably At the Waterfall, a 2000-2003 video loop projection by Marina Abramovic. A hundred and twenty images of chanting monks from different monasteries exiled in India appear simultaneously, the cascade of voices creating an aural waterfall. The work is huge, 45 feet across, an astounding mural of light and sound. Abramovic, who made a stir with her 2010 durational performance The Artist is Present at the Museum of Modern Art in NYC, is one of many artists of acclaim in the show; her work is by far the most arresting. Bodies of Light, 2006, a two-channel video projection by Bill Viola, depicts moving light emanating from male and female bodies to represent the ascension of the chakras. It is a functional but relatively weak piece by the artist. More seductive is Richard Avedon’s group photograph, His Holiness the Dalai Lama and Monks, 1998, which holds the viewer with the subject’s direct gaze.

Most interesting throughout the exhibition is the opportunity to see works by artists of lesser fame. 100 Hearts, 2005, by NYC-based Vietnamese-born artist Andy Cao is a huge string of prayer beads constructed of so-called “deaf coconuts.” The small, unusable fruits are a symbol for undesirables, such as the disabled children the artist encountered in a Ho Chi Minh City orphanage who were abandoned at birth because of abnormalities believed to be the result of Agent Orange, chemical warfare used by the U.S. during the conflict of the 1960s and ’70s. With the sculpture are the projected sounds of a haunting lullaby song by a solo female voice, which wafts through the main room of the exhibition like a cloud of comfort and loss.

Tibetan painter Tenzing Rigdol’s Brief History of Tibet, 2003, also contemplates war, the seduction of violence, and the inevitable recurrence of things. The massive work in the front of the museum mixes traditional Tibetan imagery overlain in layers of interruption that bring to mind Cubism, but Rigdol’s large work surprises the viewer with its blend of sophistication and unexpected tropes, leaving one with a hunger to see more works by this artist.

Another highlight is Luz y Soledad (Light and Solidarity), 2006, by Susan Plum. Commemorating the thousand women in Juarez who have been killed or gone missing during the last decade, it presents a video recording of a limpia, or ritual of spiritual and emotional cleansing, that was performed by women who were family and friends of the missing. During the ceremony bullroarers buzz the air and brooms are rhythmically slapped to the ground. Next to the video monitor an installation of towering brooms seemingly made of women’s hair hangs from the ceiling. This mention of violence to women, sited within the context of the other works in the exhibition, brings a missing understanding to the border wars, but it transforms notions of fault and cause, taking away one’s ability to be a partisan.

A new realization dawns. The violence is in the border itself, a national expression of the illusion of separation that clothes us. •