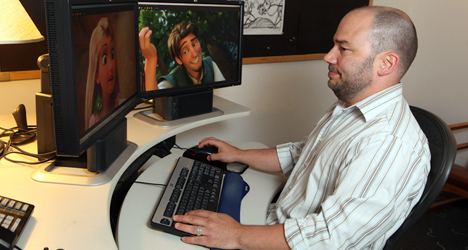 Originally from the Dominican Republic, Carlos Cabral, a character supervisor at Walt Disney Animation Studios, says there is a fine line between art and technology when it comes to today’s animated films.

“I’ve been interested in the intersection of art and technology all my life,” Cabral told me during a phone interview last week. “My mom is an artist and my dad is an engineer. I’ve always been equally drawn to both.”

In Disney’s newest animation, “Tangled,” a modern version of the classic fairy tale “Rapunzel,” Cabral helped design and implement a new system called Facial Rigging where his team of technical directors were able to add special interfaces into characters’ faces. This allowed the animated characters (Cabral calls them “virtual puppets”) to move in more specific ways.

During our interview, Cabral, who has also worked on animated films such as “Flushed Away,” “Shark Tale,” and “Bolt,” talked about Disney’s goals as a leader in the animation industry and how he sees his profession advancing in the next few years.

What kinds of cartoons do you remember watching as a kid growing up in the Dominican Republic?

Well, when the electricity was working we’d get to watch TV. They played a lot of cartoons from the U.S – a lot of Warner Bros. stuff. When we first got cable in the early 80s, the Disney Channel used to show all the Disney cartoons back to back, which was amazing.

Did you know animation was something you wanted to do back then or were you just like any other kid watching cartoons?

It was always just entertainment for me. The rest came later. I started getting into computers when I was 13. I started reading more books on computer graphics. I remember in the early 80s reading an article in the New York Times about this new company called Pixar that made the first computer animation. That’s what really made me want to start learning about it.

How much more advanced is the Facial Rigging system you helped develop for “Tangled” in comparison to other animated films?

This is cutting edge. I feel this is a huge step in the right direction. It’s very innovative and helps us give the characters’ faces more movement. Our goal was to develop the best computer-generated human performance. It’s stylized realism. We gave these characters life and emotion. Working together as a team we wanted to bring a classic Disney feel to the film as well. It was a huge challenge from an artistic and technical point of view to maintain those types of performances from all sorts of different angles.

As realistic as animation is getting, will we get to a point in the industry where animated characters won’t look like they were computer-generated anymore? Is that something animators are striving for?

I think a movie like “Avatar” really pushed that look to a pinnacle. I think what we are trying to do is different than that. Our goal isn’t ultra-realism. We’re still trying to keep it stylized and transport the characters to an imaginary world.

What was it about the story that resonated with you specifically?

I really like the way the directors re-imagined the story. They took this classic story and turned it into a comedy/action/adventure movie. It was a fresh take. It’s a movie that has a heart. I was completely blown away with what they did with the story and what they wanted to achieve in terms of character animation. We have so many characters in this movie that have to perform at such a high level. They’re not just background characters. We were trying to push it as much as we could.

Is there still room in the animation industry for 2-D? I know Disney was fairly successful last year with “The Princess and the Frog,” so is that something that we’re still going to see from time to time?

I think the goal at Disney is to let the story and the director dictate the medium. What ever way the story can be told best is the direction it should go.

Where does animation go from here in the next few years?